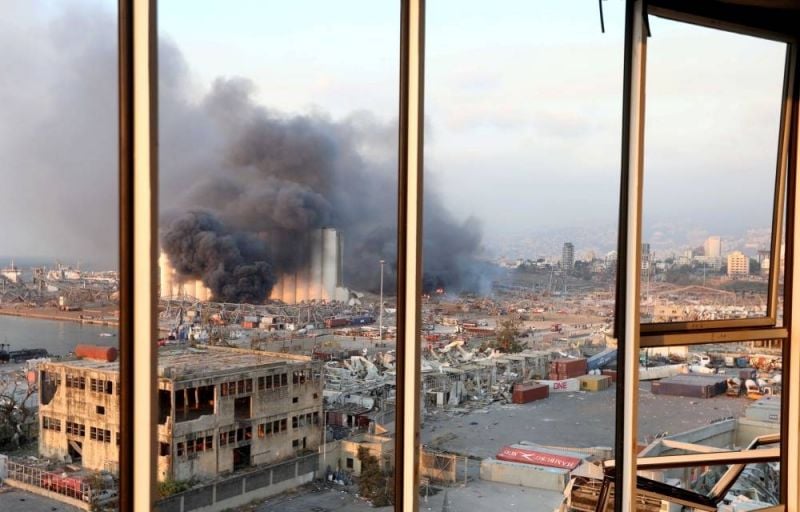 Smoke rises from the site of the Beirut port explosion on Aug. 4, 2020. (Credit: Mohamed Azakir/Reuters)

BEIRUT — Lebanese authorities have on multiple levels been criminally negligent under domestic law in the handling and management of the shipment of thousands of tons of explosive ammonium nitrate that detonated in the Aug. 4, 2020 Beirut port explosion, a new Human Rights Watch report evidences.

The comprehensive, approximately 700-page report has gathered official correspondence and documents demonstrating that several officials were aware of the presence of the chemical, which had arrived in Beirut's port aboard the Rhosus, a Moldovan-flagged ship, in November 2013, and had been offloaded into Warehouse 12 in the port on Oct. 23 and 24, 2014.

The evidence gathered suggests that not only were some government officials informed of the chemical’s presence, but were even aware of the risks the ammonium nitrate posed and implicitly accepted the possibility of casualties. HRW says this could amount to "the crime of homicide with probable intent under domestic law."

The Aug. 4 Beirut port explosion destroyed swathes of the capital, killing at least 200 people and wounding thousands. In what is considered one of the largest non-nuclear blasts ever recorded, a large stock of highly explosive ammonium nitrate that had been haphazardly stored by authorities for six years in a port warehouse detonated, mere meters away from densely populated residential districts.

To varying degrees, the HRW report places the responsibility for the negligence on the Public Works and Transport Ministry, the Finance Ministry, the Interior Ministry, the Lebanese Army, State Security and the Higher Defense Council.

Correspondence documented by HRW shows that officials of the Public Works and Transport Ministry, which oversees the port, were warned about the risks but did not properly communicate or investigate the explosive chemical that arrived on the Rhosus. The ministry then knowingly stored the ammonium nitrate in the port’s Warehouse 12 without any precautions for nearly six years. Moreover, it stored the chemical alongside other explosive materials just meters away from residential areas, violating international guidance on the safe storage of ammonium nitrate.

Ghazi Zeaiter was the Public Works and Transport Minister from February 2014 until December 2016, and his successor, Youssef Fenianos, held the office until January 2020.

The report highlights that in June 2014, while the ammonium nitrate was still aboard the Rhosus, the ruling of an urgent matters judge authorized the Public Works and Transport Ministry to store the ammonium nitrate in an “appropriate place under its custody, after taking the necessary measures given the hazardous material onboard the ship.”

Just over six years later, on the day of the explosion, the ministry also failed to sufficiently oversee repair work being done on Warehouse 12 where the chemical was stored, which may have sparked the flame that led to the blast. The report lays out evidence that port authorities sent a team to Warehouse 12 to close up a hole in the southern wall that was leaving the ammonium nitrate exposed. Three workers were hired to do the repair work and were welding doors shut on Aug. 4, 2020. The report references L’Orient Le Jour’s reporting, which indicated that workers did not know that the large sacks in the warehouse they were working on contained the highly explosive material.

The Finance Ministry oversees the Customs Administration, which controls the entry of goods into the country including through the port. The ministry is also implicated in the report as bearing responsibility for the disaster that unfolded on Aug. 4, as the Customs Administration had warned it on several occasions of the dangers of the ammonium nitrate cargo but it failed to respond with proper measures to secure the substance.

Customs officials, under the Finance Ministry, said they sent at least six letters between December 2014 and December 2017 asking the urgent matters judge to re-export or sell the ammonium nitrate. However, the report notes that “procedurally, customs did not log their requests in the registrar of the court as provided for in the Code of Civil Procedure, but sent the communications by mail.”

Ali Hassan Khalil was finance minister between 2014 and 2020. HRW’s report states that he signed a letter in 2016 from then-Customs director-general Shafik Merhi warning his ministry of “the extreme risk of the presence of this merchandise in the hangar, in unfavorable climatic conditions” and requesting urgent action “to ensure the safety of the port and the persons working there.”

Meanwhile, the Lebanese Army Command disregarded the knowledge of the ammonium nitrate in Warehouse 12 prior to the explosion, saying it had no need for the material. However, the Army is responsible for giving prior authorization for importing military equipment and ammunition, including ammonium nitrate, which has a nitrogen grade of above 33.5 percent. Under Lebanese law, this classifies the chemical as a material used to manufacture explosives. Despite this fact, military intelligence took no steps to secure the chemicals or inspect the stock, HRW’s report states.

State Security, the executive agency of the Higher Defense Council, was also reportedly informed of the existence and dangers of the ammonium nitrate at the end of 2019, and had completed an investigation into the existence of the substance. However, there was an “unconscionable delay in reporting the threat to senior government officials, and the information they provided about the threats posed by the material was incomplete,” the HRW report said.

General Security chief Abbas Ibrahim said he sent then President Michel Sleiman and Prime Minister Tammam Salam, as well as Public Works and Transport Minister Ghazi Zeaiter and Interior Minister Nohad Machnouk, a letter in May 2014 highlighting the existence of “several tons of an extremely hazardous substance,” ammonium nitrate, aboard the Rhosus, which at the time was impounded and not permitted to leave the port “until further notice.”

The judge leading the investigation into the explosion, Tarek Bitar, is currently attempting to prosecute all the officials listed above for criminal negligence, with the exception of Aoun.

Aoun, also the chair of the Higher Defense Council, admitted to having known about the existence of the ammonium nitrate since July 2020, but denied responsibility for its presence in Lebanon. “The material had been there for seven years, since 2013. It has been there, and they said it is dangerous and I am not responsible,” Aoun said.

Diab, the council's vice-chair, was informed about the substance for the first time on June 3, 2020 through an advisor of State Security’s Saliba after taking office in January, the caretaker prime minister told HRW in a recent interview. Six weeks later, on July 20, 2020, State Security sent a report alerting the president and the prime minister of the ammonium nitrate’s presence.

Diab referred the report to the Public Works and Justice ministries but took no action beyond this.

So far, the domestic investigation into the explosion has been widely criticized by activists, victims and lawyers for its due process violations, lack of transparency and delays as a result of political inference.

In the last month, Bitar has requested that Parliament remove parliamentary immunity from Khalil, Zeitar and Machnouk, so he can prosecute the sitting MPs for criminal negligence. Several MPs have signed a petition in a bid to block the request. No decision has been made on the MPs’ immunities since the request was made nearly one month ago.

BEIRUT — Lebanese authorities have on multiple levels been criminally negligent under domestic law in the handling and management of the shipment of thousands of tons of explosive ammonium nitrate that detonated in the Aug. 4, 2020 Beirut port explosion, a new Human Rights Watch report evidences.The comprehensive, approximately 700-page report has gathered official correspondence and documents...