In a move that appears likely to further delay accountability for the Aug. 4 Beirut port explosion, Lebanon’s highest appeals court decided Thursday to remove the lead investigator probing the blast 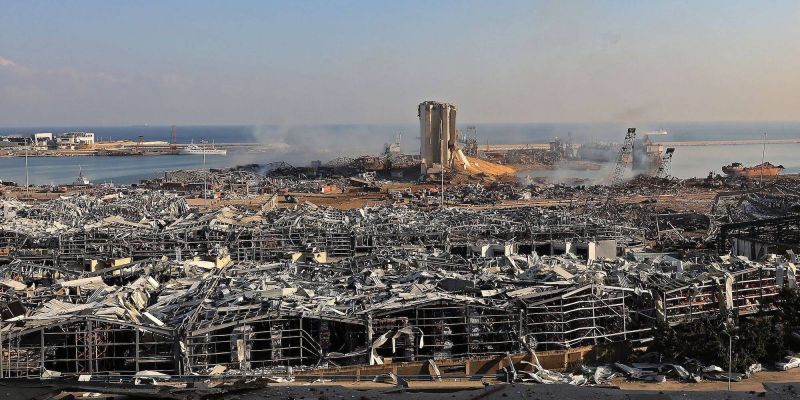 A view of the aftermath of the blast at the port of Lebanon's capital Beirut, on August 5, 2020 (Credit: AFP)

BEIRUT – In a move that appears likely to further delay accountability for the Aug. 4 Beirut port explosion, Lebanon’s highest appeals court decided Thursday to remove the lead investigator probing the blast and transfer the case to a new judge who is yet to be appointed, judicial sources told L’Orient Today.

Investigating Judge Fadi Sawwan had suspended his probe on Dec. 17, when two former ministers — Ali Hassan Khalil and Ghazi Zeaiter — who he had charged with criminal negligence over the explosion, requested that the Court of Cassation transfer the case to another judge. Khalil and Zeaiter challenged Sawwan’s summons and asked the court to replace the judge, citing “legitimate suspicion” over the legality of the decision.

Sawwan had just managed to resume investigations last week after a nearly two-month standstill. Many were hopeful when a court, headed by Judge Jamal al-Hajjar, in January decided to reject the request to pause the investigation and gave Sawwan the green light to resume questioning officials and civil servants over the Aug. 4 explosion.

Thursday’s decision now brings the case to a halt again. The Court of Cassation chamber, headed by Judge Jamal al-Hajjar, provided no details on the reasons for its decision. Representatives of the court could not be reached for comment; nor could Sawwan.

However, court documents obtained by L'Orient Today show that the decision was based on two main factors. The first was that Sawwan had been impacted by the blast when his home in Achrafieh was damaged in the explosion, which would not make him impartial enough to investigate the crime. Large swathes of the capital were either destroyed or heavily damaged in the explosion.

Another reason cited in the document is that Sawwan had previously said he would not stop at any “red lines” in his pursuit of those responsible for the explosion, and that immunities enjoyed by officials would not deter him from prosecuting them. Both Khalil and Zoietar are MPs which means they have parliamentary immunity and cannot be arrested.

Nizar Saghieh, executive director of Legal Agenda said he did not find the arguments convincing and that the decision has set a dangerous precedent that could deter future judges from holding the political elite accountable.

“This could mean that no judge will dare try to do this again and that we’ll never reach justice in this massive crime,” Saghieh said.

The removal of Sawwan six months after the catastrophic Aug. 4 explosion means the investigation, which has so far been shrouded in secrecy, will be further stalled with no information released to the public and to the thousands of victims of the blast.

Caretaker Justice Minister Marie Claude Najm will now have to propose a new investigating judge. The judge would then have to be approved by Lebanon’s Higher Judicial Council and the investigation would have to start over from the beginning, a judicial source said. The Justice Minister could not be reached for comment.

The Higher Judicial Council is comprised of 10 members, eight of whom are appointed by the executive branch. The other two are voted by the Court of Cassation.

“The political class won’t accept the nomination of an independent judge. They will do everything in their power to make sure they have full control of the investigations,” Saghieh said.

Human Rights Watch Researcher Aya Majzoub condemned the decision saying in a Twitter post that the removal of Sawwan “makes a mockery of justice and is an insult to the victims of the blast & the #Lebanon public. More than 6 months later, we are back to square one.”

The decision has come as a blow to many of the victims and their families who have been waiting on answers from the opaque and slow-moving investigations for over half a year.

“We’re in complete shock,” said Kayan Tleis, the head of the Committee of Families of Beirut Port Martyrs and the brother of Mohammad Tleis, who was killed in the explosion.

“This decision to us means that the truth will be lost,” Tleis told L’Orient Today. “On several occasions when we met with the Judge [Sawwan] he told us that the case would not leave his hands,” Tleis said. “He didn’t even have a chance to continue.”

“We’re not going to stay quiet over this. The lives that were lost were not meaningless … and we’ll be going to the street to protest.”

Sarah Copland, whose 2-year-old son Isaac died in the Aug. 4 explosion tweeted “For there to be any justice … the international community must call for an independent, impartial & transparent investigation.”

“The Lebanese investigation has been given a chance but it is clear it is never going to get anywhere,” Copland said.

The explosion — one of the biggest non-nuclear blasts ever recorded — was caused by a fire that ignited 2,750 metric tons of ammonium nitrate haphazardly stored by authorities for six years in a port warehouse, mere meters away from residential areas. The blast left swathes of the capital destroyed and killed at least 204 people while wounding over 6,000. The cause of the fire is not yet known.

BEIRUT – In a move that appears likely to further delay accountability for the Aug. 4 Beirut port explosion, Lebanon’s highest appeals court decided Thursday to remove the lead investigator probing the blast and transfer the case to a new judge who is yet to be appointed, judicial sources told L’Orient Today.Investigating Judge Fadi Sawwan had suspended his probe on Dec. 17, when two...