Who is Tarek Bitar, the judge who will take over the Beirut port investigation after Fadi Sawwan’s removal? 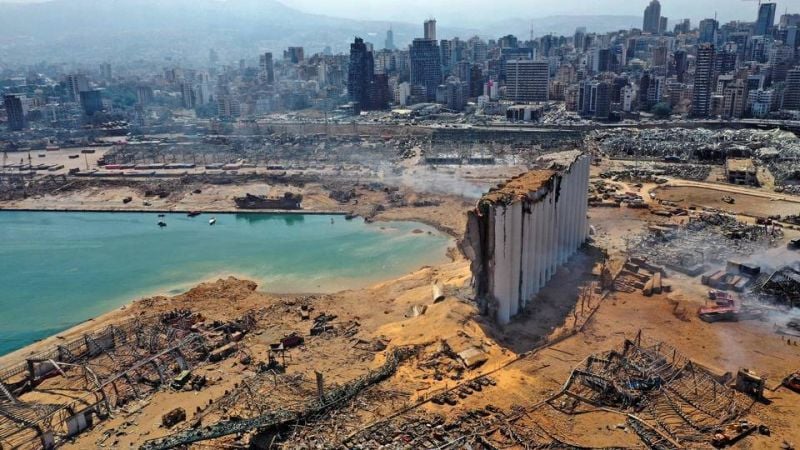 An aerial view of the Beirut port following the explosion of Aug. 4, 2020. (AFP)

BEIRUT — Less than two days after his predecessor’s abrupt removal from the Beirut port explosion case, Judge Tarek Bitar was at work in his office in Beirut’s Justice Palace Saturday, poring through the pages of the six-month-old investigation file.

Bitar, the 46-year-old head of Beirut’s criminal court, will be the second judge to investigate the explosion caused by some 2,750 tonnes of ammonium nitrate haphazardly stored in a port warehouse by authorities for over six years.

The Court of Cassation removed Judge Fadi Sawwan from the probe on Thursday after two former ministers he had charged with criminal negligence requested that the case be transferred to a new judge. The decision led to an outcry, particularly by victims’ families, who feared that Sawwan’s removal would take the case back to square one.

Many had expected a long delay before a replacement would be appointed, but Bitar was named to the powerful but politically precarious role of judicial investigator by Lebanon’s Higher Judicial Council on Friday after his name was put forward by caretaker Justice Minister Marie Claude Najm. Bitar accepted the post, despite having refused it months ago, before Sawwan was appointed.

Here’s what we know about the new lead investigator in the Beirut explosion probe.

Who is Tarek Bitar?

Bitar, who is from the village of Aydamun in Akkar, is currently the head of the Criminal Court in Beirut.

He has held the position since 2017, and his name was originally put forward ahead of Sawwan to lead the investigation in August by Najm. Bitar at the time released a statement saying he had declined the role without providing further information. Bitar could not be reached for comment for this article.

While local media speculated that his refusal in August was due to political pressure, a judicial source told L’Orient Today that Bitar had turned down the position because he was expected to continue his responsibilities as Criminal Court President while also leading the blast investigation at the same time.

“The responsibilities together are too great,” the source said.

Bitar’s reasons for accepting the appointment this time around remain unclear but the source said it is likely that another judge will take on some of Bitar’s Criminal Court responsibilities while he leads the investigation.

Bitar is held in high regard among colleagues and is described as having no political leanings or affiliations, the source said.

Before Bitar’s appointment on Friday, Najm had proposed Judge Samer Younes, but this was turned down by the Higher Judicial Council. Younes was recommended to lead the investigation by Najm back in August but was also rejected at the time.

No explanation was given for this decision, but the judicial source said it is speculated Younes was turned down due to his close relations with President Michel Aoun. Younes in August responded in a statement defending his political independence.

Justice Ministry officials could not be reached for comment Saturday.

How likely is it that Bitar will be able to move the case forward?

Despite Bitar’s quick appointment, the court’s decision to remove Sawwan has widely been seen by lawyers and rights activists as a massive setback to an already slow-moving investigation and emblematic of the entrenched corruption in Lebanon’s judiciary and political class.

Some have questioned whether a truly independent candidate would have a chance at being named to the post, given that the appointment had to be approved by the Higher Judicial Council which is made up of 10 top judges, eight of whom are selected by Lebanon’s ruling class.

Further adding to the mistrust, Bitar was selected by Najm — a minister in a resigned Cabinet headed by caretaker Prime Minister Hassan Diab who was charged by Sawwan in December for criminal negligence. Diab had refused to appear before Sawwan for questioning.

Nizar Saghieh, executive director of Legal Agenda, said that Bitar is a qualified judge but was skeptical about whether he would be able to carry out his mission successfully without political interference, given Sawwan’s removal from the case.

“Tarek Bitar is a young judge who is competent and has a good reputation,” Saghieh wrote in a tweet Friday. “The biggest question is, will he continue to summon top officials without stopping at the red lines?”

One major factor in Sawwan’s removal from the case was that he said he would not stop at any “red lines” in his pursuit of those responsible for the explosion, and immunities enjoyed by officials would not deter him from prosecuting them. Both former ministers Sawwan had indicted are sitting MPs, which means they have parliamentary immunity and cannot be arrested.

Another major reason cited for Sawwan's removal — the fact that his home had been damaged in the port explosion, which the Court of Cassation argued prevented him from being impartial — apparently was not a factor with regards to Bitar.

BEIRUT — Less than two days after his predecessor’s abrupt removal from the Beirut port explosion case, Judge Tarek Bitar was at work in his office in Beirut’s Justice Palace Saturday, poring through the pages of the six-month-old investigation file.Bitar, the 46-year-old head of Beirut’s criminal court, will be the second judge to investigate the explosion caused by some 2,750 tonnes of...