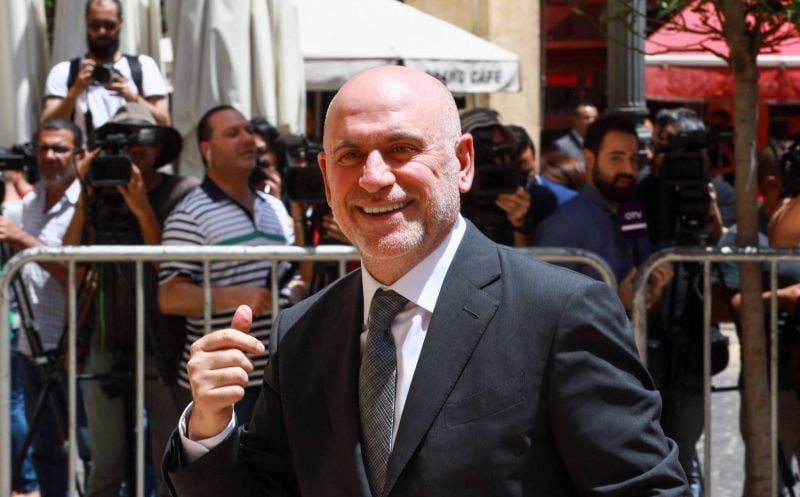 Former Public Works Minister Youssef Fenianos missed his hearing in the Beirut port blast case on Thursday, prompting the investigating judge to issue a warrant for his arrest. His whereabouts are unknown. (Credit: Anwar Amro/AFP)

Fenianos, 57, headed the ministry from 2016 to early 2020. His whereabouts are unknown, but he is thought to be in Lebanon.

The warrant came a day after more than 140 human rights groups, survivors and relatives of victims called for an international probe into the country’s worst peacetime disaster, as “Lebanese leaders continue to obstruct, delay and undermine the domestic investigation.”

It emerged later that officials had known the highly volatile substance had been left to linger unsafely at the port for years after it was unloaded in 2014.

But progress in the Lebanese investigation has been slow.

A court threw out a first judge put in charge of the investigation after he charged former Prime Minister Hassan Diab and former ministers with “negligence and causing death to hundreds” after all had refused to appear before him.

And officials have been working to hamper the probe led by his successor Bitar.

Parliament has refused to lift the immunity of three other former ministers who are also lawmakers so the judge could question them. Meanwhile, the former interior minister refused to allow the head of the General Security agency to be interrogated.

Political parties across the spectrum, including Hezbollah, have accused Bitar of “politicizing” the probe.

Bitar in August subpoenaed Diab, then Lebanon’s caretaker premier, for interrogation on Sept. 20 after he too failed to show up for questioning, but he has flown to the United States on holiday.

Diab’s government handed over to a new cabinet earlier this week after more than a year of horse-trading over who would next take the reins of the multi-confessional country.

Fenianos’ lawyer, Nazih al-Khoury, said the arrest warrant was in “blatant violation of the law.”

“We, as a defense team, are studying the options we can resort to in the coming days and that are available to us under the law,” he told AFP.

Observers fear that Bitar, like his predecessor, will be kicked off the investigation.