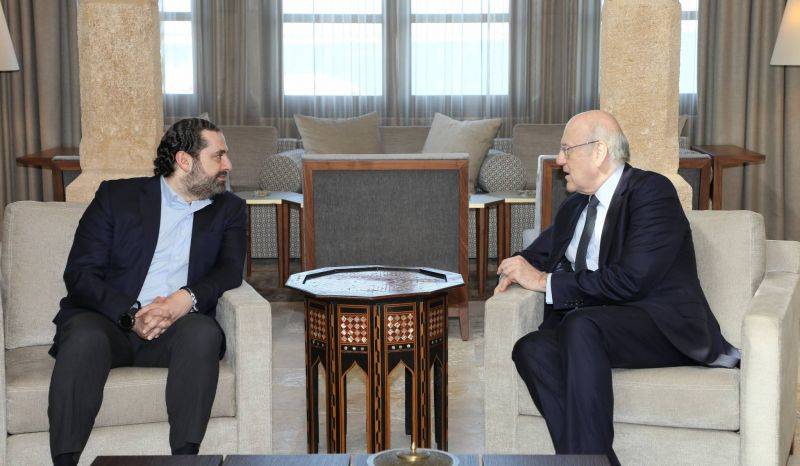 When the former prime ministers gave the green light to Mikati’s appointment as premier-designate in July, sources close to them said they were convinced that the Tripolitan billionaire was going to fail in his mission to form a cabinet, just like his predecessor, Saad Hariri.

Hariri, a three-time former premier, had stepped down because of President Michel Aoun’s obstinate position on securing effective veto power in the government.

Such a scenario would have made it possible to shift all the blame for the political paralysis on the president and prepare to face the Aounist movement in next year’s parliamentary elections.

The telecom tycoon, however, defied all odds thanks to a French-Iranian agreement that forced all the local players to reach a compromise.

Does this mean that Mikati has now become the new leader of Lebanon’s Sunni community, relegating Hariri to the background? It remains far too early to tell.

The rivalry between the current premier and his predecessor seems likely to resurface, however, especially because the two men have never much appreciated each other in the past, except in 2016, when they managed to find common ground during that year’s parliamentary elections to share power in the north.

Today, things are a far cry from 2011, when former Prime Minister Rafik Hariri’s son considered Mikati’s government a screen for Hezbollah and the Shiite party’s supporters, locally referred to as the “black shirts.”

Since then, Hariri has been forced to find a detente with Hezbollah.

But behind the scenes, the Hariri clan fears that its old rival will end up making deals with Aoun and his son-in-law Gebran Bassil — Hariri’s former partner, who has become his nightmare.

“We have to see what he will do now or whether he has already made concessions to the president’s camp,” an adviser to Hariri says, referring to Mikati. The source is betting on the new government’s failure.

In other words, if Mikati succeeds in his mission, Hariri will have to join him. Otherwise, he will disavow him and present himself as the only solution.

“Mikati will have to face multiple challenges. If he makes any concessions to Aoun, it will affect his popular base,” the source close to Hariri says.

Hariri’s circles fear that the president is seeking only to settle scores.

“The last year of my term will be one of real reforms,” Aoun declared recently. The president reportedly said in private that he had already gotten rid of Hariri, and he should now do the same with Parliament Speaker Nabih Berri.

Banque du Liban Gov. Riyad Salameh, who is close to both Hariri and Berri, is also in the head of state’s crosshairs.

An informed source says Aoun would also like to appoint a new Internal Security Forces director general to succeed Imad Osman. Should this happen and Mikati agree to the president’s chosen candidate, it would rupture the prime minister’s relations with Hariri.

Mikati, for his part, is aware that he is walking through a minefield and is keen on running his government as he previously did, from 2011 to 2014.

“Mikati wants to cooperate with Aoun regarding the economic rescue, but will not make any serious concessions to him and will confront him if he ever uses the government to settle scores,” a source close to Mikati says.

‘Inevitable’ alliance in the north

The 2022 parliamentary elections are the main concern for both Hariri and Mikati.

Hariri has been weakened by several factors, including his personal financial situation, his poor political record and strained relations with Saudi Arabia.

But within Future Movement circles, everyone seems convinced that his leadership will not be challenged.

“Hariri is not over yet. He is actually preparing for the elections,” says one of the former prime minister’s advisers, who is banking on the fact that despite a decline in his popularity, the Future Movement head retains a hold on many Sunnis relative to his opponent.

Mikati’s team, meanwhile, is confident that its leader will emerge even stronger following the government formation and will improve his political score in the parliamentary elections.

“Saad Hariri will have no choice but to ally with us in the north,” the source close to Mikati says. Mikati intends to be on top of the electoral list in Tripoli but does not wish to present candidates in other areas.

Both camps also believe that the prime minister does not intend to take up a larger role on the Sunni scene.

“He’s been here for 30 years. If he wanted to be the leader of the Sunnis, he would have done everything to achieve this a long time ago,” a source with knowledge of the matter says.

But one ought to remember that politics is like food: appetite comes with eating.

When the former prime ministers gave the green light to Mikati’s appointment as premier-designate in July, sources close to them said they were convinced that the Tripolitan billionaire was going to fail in his mission to form a cabinet, just like his predecessor, Saad Hariri.Hariri, a three-time former premier, had stepped down because of President Michel Aoun’s obstinate position on...