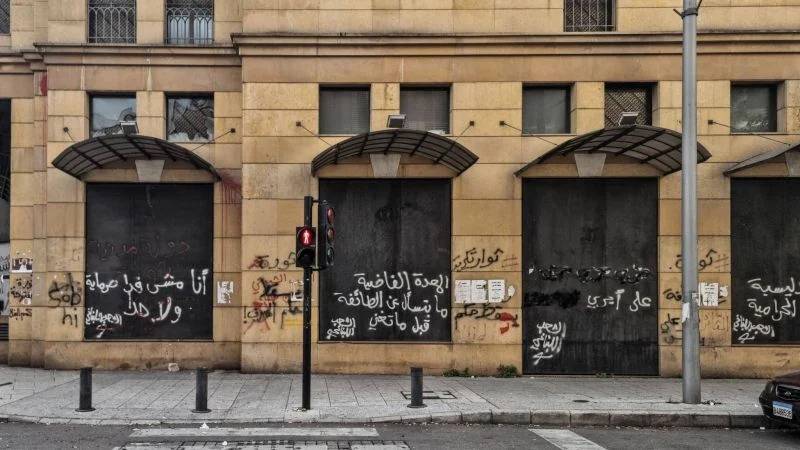 The dangerous walk across the Gouraud-Georges Haddad crossroads, a car vortex at the intersection of a street and a highway, projects me into another dimension, a non-city made of vast empty parking lots and hollow luxury buildings. At the entrance of this hazy place, the geographical center of Beirut, I find myself in front of doors sealed with metal and tagged with all kinds of insults: the headquarters of the Association of Banks in Lebanon, emblazoned with graffiti: “LOL.”

Yes! “LOL.” The timeworn acronym for “laugh out loud,” LOL is the international symbol of laughter and sarcasm, recognized in 2011 by the Oxford English Dictionary (at the same time as “OMG”). Today, LOL is closely linked to the Lebanese banking system. First used on messaging apps as a genuine, sincere laugh, it is now increasingly used as a punctuation mark of sarcasm at the end of a sentence: “They stole all my money, LOL.”

In the early 1960s, the Association of Banks in Lebanon was headquartered at the Tabet building on Riad al-Solh Square and overlooked Banks Street, which housed a number of financial institutions. The street was spared by all the feuding militias during the Civil War while the rest of the city center was completely ravaged. It was found undamaged in 1990. But before that, in 1982, ABL moved to the outskirts of the city, taking up residence in the Macarri Center in Bourj Hammoud. In 2001, it moved back to the center of Beirut to its current headquarters in Saifi, on the intersection of the narrow and long Gouraud Street and the disproportionately wide and short Georges Haddad Street. In more than 60 years of existence, the ABL has thus traveled both ways along the Armenia-Gouraud-Emir Bashir thoroughfare, as we have done since the beginning of our own psychogeographical journey.

Today, Lebanon’s love affair with its banks is over. They are an essential element of the corrupt system, and their shareholders are often close to the ruling oligarchy, if not in total collusion with it. Against the backdrop of the liquidity crisis, they have established unofficial capital controls that restrict depositors in an opaque manner. After the disappearance of most of their foreign currency savings, the Lebanese are all the less armed to face the succession of calamities that will follow: the monster devaluation of their currency, the cataclysmic explosion of their capital city’s port and the series of dramatic shortages of medicines, oil, wheat and other basic goods. One wonders if the hospitals could be able to continue to function, the ambulances to circulate, the water to be pumped into the tanks, the supermarkets to be supplied. Some people have even evoked, in the mountains, the specter of the great famine of 1915.

ABL, as well as its 60 member banks and Banque du Liban, the central bank that oversees the system — in fact, the entire Lebanese banking sector is entrenched behind fences and barbed wires. To protect what? Empty coffers, LOL. Cut off from the people it is supposed to serve and whom has stripped bare, it no longer overlooks any street. It symbolizes the great LOL that the financialized capitalism of the first quarter of this 21st century has become.

By forcing depositors to withdraw their dollars at a rate different from the market rate, the Lebanese banking oligopoly has essentially created a new monetary value. Indeed, when depositors wish to withdraw their dollars (USD) in cash, they can only withdraw them in pounds (LBP) at the fixed rate of 8,000 LBP/USD. At the same time, the market rate at a money exchanger in town is around 40,000 LBP/USD. So, one dollar withdrawn from an account in a Lebanese bank equals just 20 cents on the market.

This means that a dollar deposited before 2019 in a Lebanese bank has been forcibly converted into a new de facto currency and is now worth only 20 percent of its original value. Depositors have therefore suffered a haircut of 80 percent on their foreign currency accounts. This situation was described by the economist and former columnist Dan Azzi, who brilliantly named this Lebanese dollar: the “lollar,” with the monetary symbol LOL. Giving a name to a social or economic fact makes it exist in the eyes of the world. Moreover, the lollar now has its own definition in the famous Urban Dictionary, whose motto is to “Define Your World” and which repeats word-for-word the definition given by the ex-Lebanese banker: “Lollar: A lollar is an American dollar blocked in the Lebanese banking system. It is in fact a simple computer entry with no corresponding currency ... The symbol for a lollar is LOL.”

The LOL is the cleverest and most unscrupulous hold-up in the history of banking. Dollars are attracted to the Lebanese banking system by interest rates that are much higher than those charged on international markets. In principle, high remuneration is linked to high risk. But Lebanese banks have benefited from a capital of trust acquired over the years: they survived the 1975-1990 Lebanese Civil War and they were shielded from the ravages of the 2008 subprime crisis — indeed, they might even have benefited from it. Year after year, the dollars continued to flow in while they were used (and not invested) to finance (the ultimate aberration) of imports (hydrocarbons, medicines, cereals, and others) of a country whose trade balance is structurally in deficit. Another portion of these dollars was paid in interest to depositors and in dividends to shareholders.

Thus, of each dollar deposited in a Lebanese bank, one portion was spent to finance the unsustainable lifestyle of the Lebanese people (consumerism), while the other part was redistributed to the depositors and the actors of the system to anesthetize them and convince them to inject more dollars in the system (rent).

This consumerism and this rent are the two udders that fed the Lebanese corruptocracy and led the country to ruin. They feed a sleepwalking world that lives beyond its means, consumes more resources than the planet can produce and financializes rents that have no counterpart in the real economy, LOL.

As the COP27 conference ended in Egypt this month with disappointing conclusions, does the collapse of Lebanon prefigure the great apocalypse of system-earth that scientists announce and describe in their successive IPCC reports?

Camille Ammoun is a writer, public policy consultant and member of Beyt el-Kottab. His latest book is Octobre Liban (in French; Éditions Inculte, 2020). His column appears monthly in L’Orient-Le Jour and L’Orient Today.

The dangerous walk across the Gouraud-Georges Haddad crossroads, a car vortex at the intersection of a street and a highway, projects me into another dimension, a non-city made of vast empty parking lots and hollow luxury buildings. At the entrance of this hazy place, the geographical center of Beirut, I find myself in front of doors sealed with metal and tagged with all kinds of insults: the...