The Netflix series, the first from the Middle East to gain an international audience, follows the daily lives of a group of rich people in Dubai, against a backdrop of money, drama, and ostentatious display. While one might argue that “Dubai Bling” has the merit of paying lip service to subjects considered taboo in the region until now, the series ends up giving a two-dimensional depiction of the main city in the United Arab Emirates. Here’s a closer look at what is unfolding in the series. 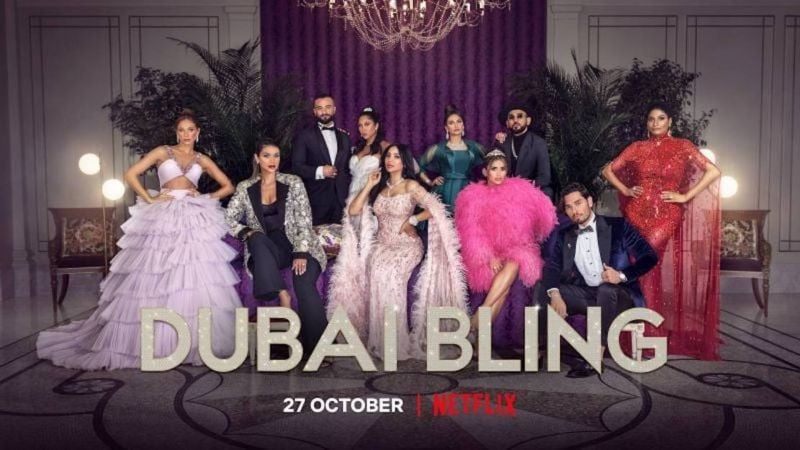 ‘Dubai Bling’ has been a hit on Netflix since its release. (Credit: DR)

For several years now, we have seen a number of reality TV series flourish whose main pitch is nothing more than to follow the daily lives of a microcosm made up of rich people.

“The Real Housewives,” aired in 2010 on Bravo and, as its title indicates, it detailed the trials and tribulations of a group of housewives, wild and loaded with money, in Beverly Hills and New York.

Then came “Bling Empire,” which has been on Netflix since 2021. The series focuses on the blinged-out lives of Asians and Asian Americans in Los Angeles.

It was expected that the Middle East, the land of old petrodollars and new entertainment money, would not be left out of this global trend for too long.

In 2022, “The Real Housewives” was adapted to Dubai, with a product that did not make a splash with a large audience.

Later that year, Netflix Middle East launched “Dubai Bling” in a bid to capture a share of the audience usually dominated by the Shahid streaming service (part of the MBC group).

In a very short time, the series was not only the first Middle Eastern series to gain an international audience share (third most-watched show in the week of its launch), but also became the most controversial show of the moment, attracting both a wide audience and outcries from a plethora of critics.

Preached at by the rich

It is in the main city of the United Arab Emirates that the Dubai Bling is being “played.”

We use the term “play,” not taking place or filmed, because each of the protagonists’ gestures, interventions, arguments, tears, or expressions of euphoria seems to be scripted to the millimeter, wrapped in the syrupy drama of the 1980s US soaps like “Dallas” or “Dynasty.”

On paper, the pitch promises viewers immersion in a “high-flying circle of Dubai, where private jets, lavish parties, breathtaking skylines, and stunning outfits are commonplace.”

This is indeed what the series has offered so far over the eight episodes that make up the first season.

This high-flying circle includes is Zeina Khoury, a Lebanese woman at the head of a real estate company who says, “I am the company” and who, from the beginning, set the tone of the series with this line that has become almost legendary: “I am a millionaire after arriving in Dubai with $300 in my pocket.”

Asked by L’Orient-Le Jour about the insistence on focusing on material possessions, the monetary value of things, as we systematically see throughout the series how people are vying for the most extravagant weddings, the price of Cartier necklaces mentioned nonchalantly, and a multi-million dollar apartment deemed inexpensive, Khoury said: “I am also a very open person in real life, and I am comfortable discussing my ups and downs, and that’s how I stayed for the show.”

“To say I’m a millionaire is just stating a fact, but how I became a millionaire is the essence of my story on the show. I hoped to inspire young women and men to pursue their dreams,” she added.

While it might be true that this narrative is widely repeated throughout the show’s episodes, emphasizing that Dubai is the land of opportunity, the viewers are stuck with this high-flying group of people lecturing everyone else, while implicitly suggesting that money grows on trees in this city and that it is up to people to find it.

“What I would like the viewers to remember from my participation in the show is that they are masters of their own destiny,” Khoury said, adding, “They don’t have to accept the reality they were born into. With hard work, you will go places in life. So don’t hesitate to take calculated risks and make necessary efforts. If others can do it, why can’t you?”

The show also aims to serve as a melting pot of different characters with diverse cultures and dialects.

Lojain Omran is a Saudi TV hostess with an endless wardrobe that she searches through with slight boredom.

Loujain Adada, a Lebanese socialite who admits to having made her fortune after marrying a billionaire, solemnly declares without the slightest hint of irony: “I’m not playing hard to get. I am difficult.”

Also in the cast, there is Farhana Bodi as an influencer of Indian origin, the Emirati DJ Bliss, and his wife Danya Mohammed (aka Diva Dee); the Kuwaiti businessman Ebraheem al-Samadi, head of a floral company; Iraqi-British influencer and pseudo-fashion designer Safa Siddiqui; Lebanese-Australian radio host Kris Fade and his wife Brianna Fade, who co-run his Fade Fit empire (a health food company).

Imagine for a moment these characters in a kind of luxury bubble, punctuated by the roar of jets and expensive cars, the glitter of diamonds and Hermes leather, and the fireworks of parties and weddings worth tens of millions of dollars. Add to that a heavy dose of drama, arguments, controversies, and catfights, and you have a taste of “Dubai Bling.”

However, when this veneer cracks from time to time, certain taboo subjects are brought up, such as that of surrogate mothers or visiting a therapist (what a scandal!), but only half-heartedly, only to be brushed aside quickly.

Khoury underlines this aspect of the series.

“I made it a point to speak out and be open about private issues that are considered taboo in the MENA region,” she stressed. “It is time for us to show the public our success but also our struggles as human beings who go through difficult times and experiences.”

Khoury added, “I also want viewers to remember how important it is for women to be financially independent, as it gives them unlimited power, confidence, and freedom.”

In reality, however, the show does not truly touch much on off-limits subjects in the region’s culture or shed light on the protagonists’ personal trials.

Instead, the viewers find themselves watching an exceedingly exaggerated display of money, extreme lavishness, and extravagance, to a nauseating point.

It is also a show where women are automatically reduced to their physical appearance and their dressing room — a show that is perhaps best described as “bling,” which makes the viewers, who know little about the city, wonder if Dubai and Bling are actually synonymous.

Beyond all the superficial, materialistic aspects of the series, the most regrettable thing is that the show ends up depicting a two-dimensional Dubai, disregarding the real wealth of this city, that of a mass of people, outside of this high-flying circle, working to nourish and develop.

This story was originally published in French in L’Orient-Le Jour, translated by Sahar Ghoussoub.

For several years now, we have seen a number of reality TV series flourish whose main pitch is nothing more than to follow the daily lives of a microcosm made up of rich people.“The Real Housewives,” aired in 2010 on Bravo and, as its title indicates, it detailed the trials and tribulations of a group of housewives, wild and loaded with money, in Beverly Hills and New York.Then came “Bling...

The surprising allure of going up in flames