Inside the Corm Building, a newly revived Beirut architectural icon

After undergoing renovations for the past five years, the historic building will open to the public in early 2023 as a multipurpose cultural space. 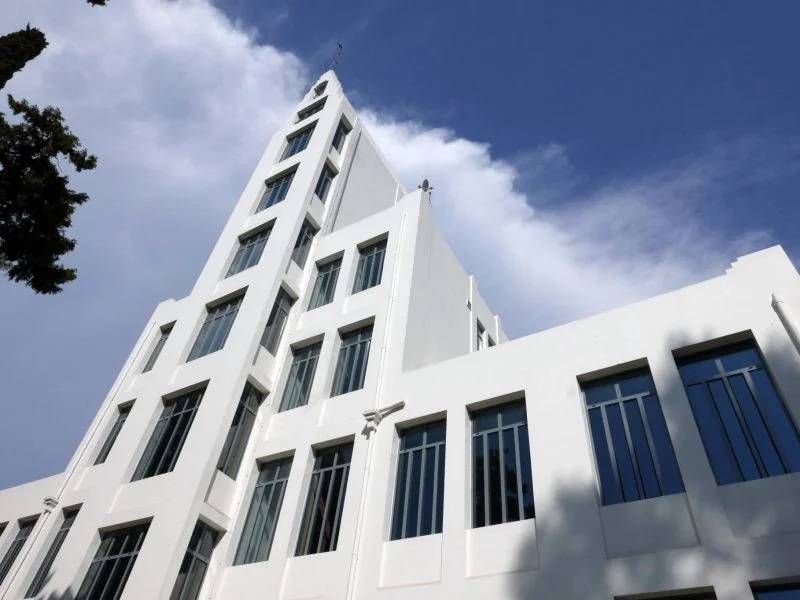 A view of the Corm Building, once the tallest building in Beirut. (Credit: Carla Henoud/L'Orient-Le Jour)

It is a white house like no other; a unique piece of architecture in Beirut with its eclectic avant-garde combined with elements of the past.

This modernist-style Corm Building, inspired by New York skyscrapers, has long dominated the Lebanese capital with its singular presence. This is because, until 1958, it was the tallest tower in the city, with a height of 35 meters.

Planned and built by the poet Charles Corm in 1928 on a vast plot of land in Achrafieh, the building initially housed a Ford car showroom and assembly workshop.

A visionary entrepreneur, a barely 18-year-old Charles Corm had traveled to the United States in 1912, where he succeeded in convincing automobile magnate Henry Ford to name him the car company’s first Middle East representative — reportedly after he showed Ford where Lebanon was located on a world map.

But the First World War broke out and Corm’s project was put on hold until 1920. In the meantime, as a famine devastated much of Lebanon, Corm imported modern equipment that mechanized local agriculture.

Corm became the exclusive Middle East agent for the Ford Motor Company and several other car and agricultural machinery companies, making a fortune within a few years.

“But, rich or poor, he promised himself he would return to his passion for writing,” his son Hiram Corm recently told L’Orient-Le Jour. In 1934, at the age of 40, Charles Corm retired from business to devote himself entirely to literature. 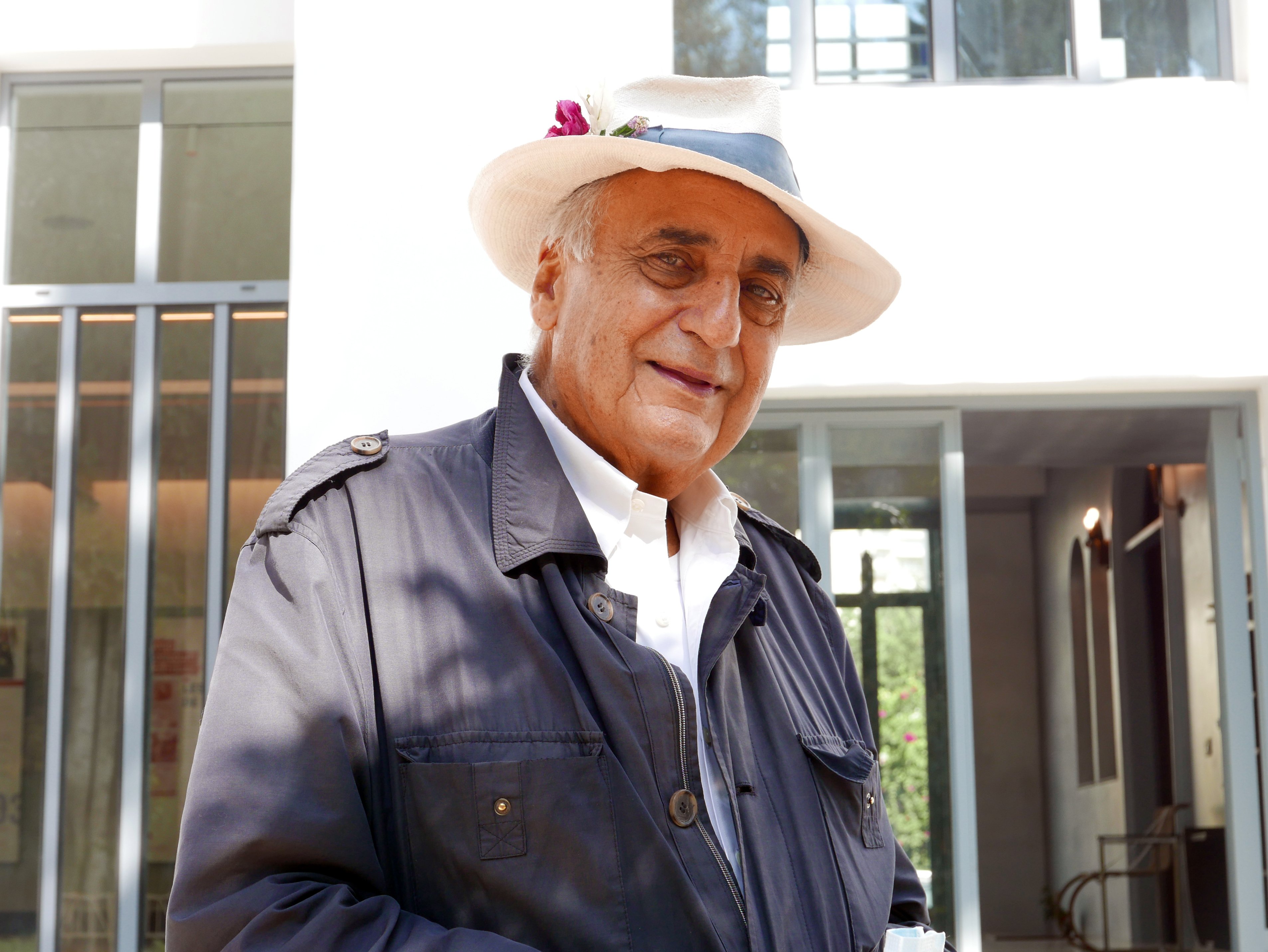 “His various agencies and branches were distributed throughout Lebanon, Syria, Jordan, Transjordan, Palestine, Iraq and Turkey to his most qualified employees”, said Hiram.

After this early retirement, in 1939, Charles Corm converted the disused showroom on Damascus Street into a private residence where he lived with his wife and children.

It was there that he also set up the headquarters of La Revue phénicienne, a French-language publication that Corm had launched in 1919.

The building became a gathering place for intellectuals and thinkers of Corm’s time, such as Hector Khlat, Said Akl and Michel Chiha, members of the Cercle des amitiés libanaises, which he had also founded in 1935.

After his death in Sept. 1963, Corm’s family kept living in the building until Sept. 1975, when a fire caused by wartime rocket fire forced them to leave.

Squatted and plundered by militias during the Civil War, the building stayed abandoned for years. Finally, the poet’s sons, David and Hiram, moved back in at the end of the 1990s, when they took the helm of La Revue phénicienne.

In spite of its disrepair, the building maintained a sense of cultural and historical importance.

Several years ago, those who had inherited the building began plans to restore it and transform it into a center for meetings, exchange and intellectual and artistic activity.

Finally, after half a century of abandonment, the Corm house has come back to life. Restoration work that began five years ago is almost complete.

Today the home hosts a small exhibition dedicated to the French brothers and writers Edmond and Jules de Goncourt as part of the Beirut Books festival. The exhibition is only a preview, however, as the building will officially open its doors to the public in early 2023.

“We want this house to become once again a place of life and cultural dialogue that hosts events and inspires artists, creators, thinkers, researchers and students,” David Corm told L’Orient-Le Jour. 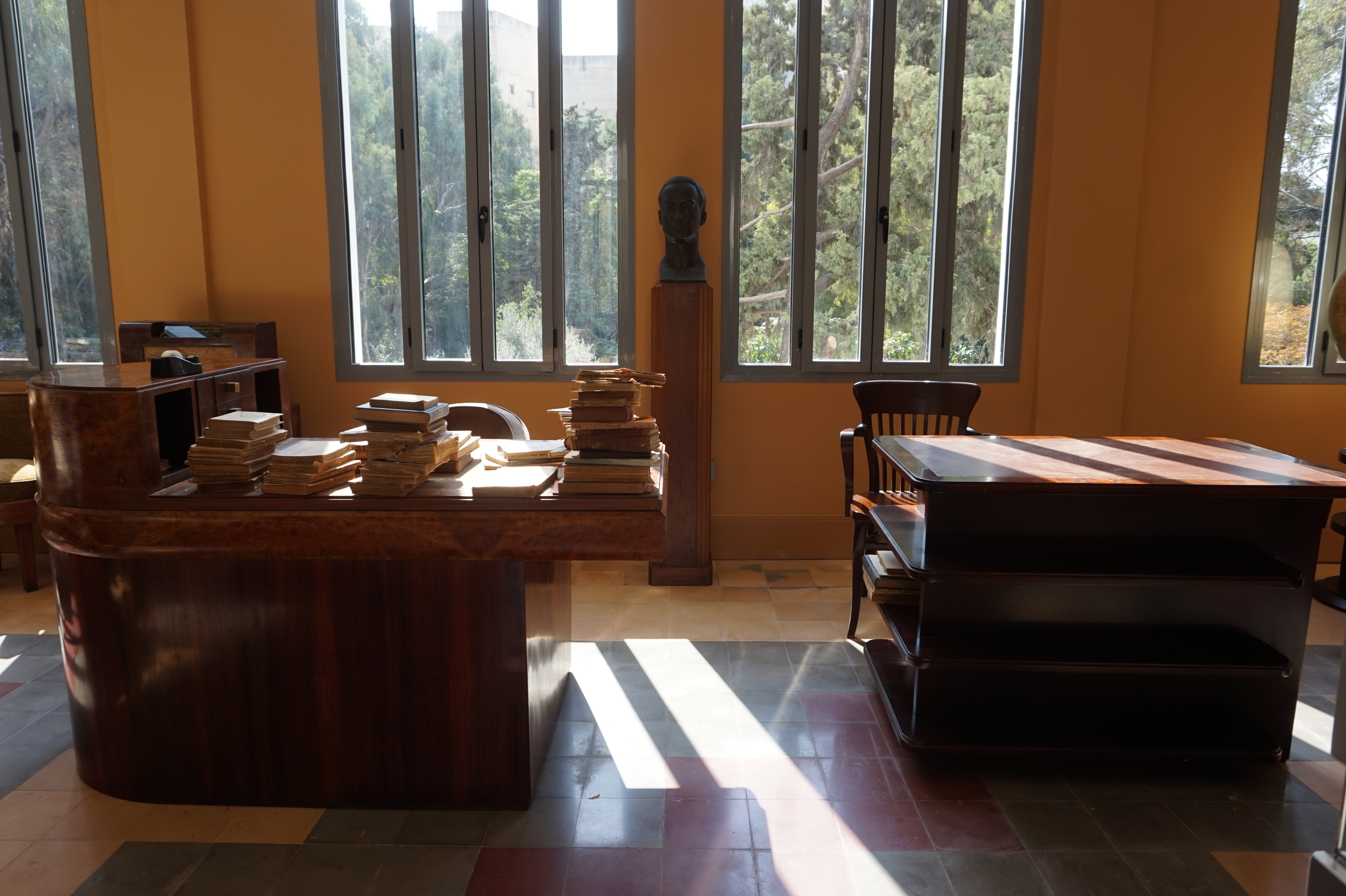 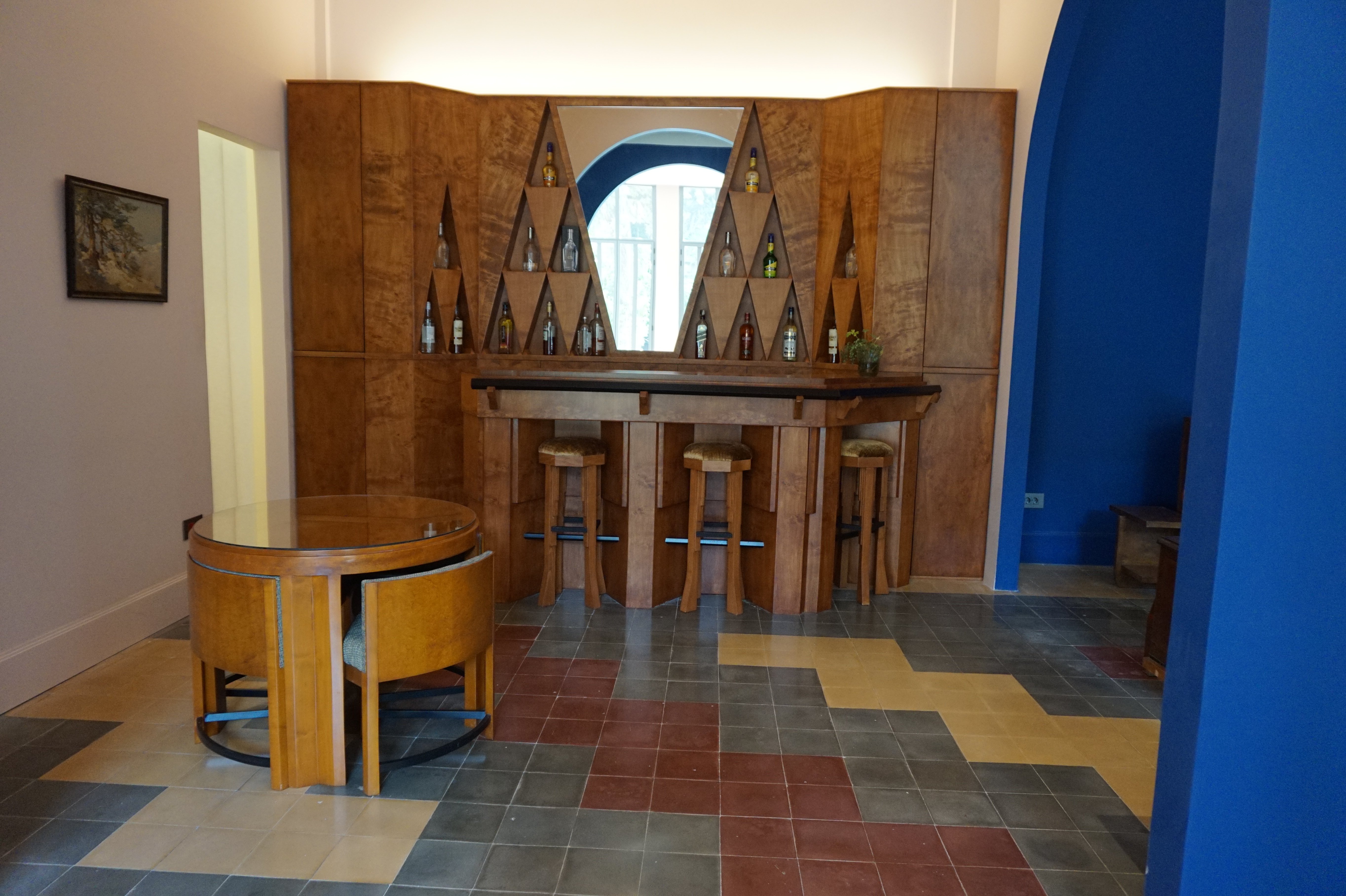 A visit to the Corm building is a walk through Lebanon’s cultural and artistic past, its rooms having been reconstructed to look as they did during the poet’s lifetime.

Much of this reconstruction was done with original furniture and objects that survived the fire and subsequent looting. On the first floor, a lounge-bar retains its art deco furniture: snakeskin armchairs, wall sconces and lighting fixtures by the French designer Pierre Charreau.

Designer furniture pieces purchased at the 1925 Paris Decorative Arts Exhibition reveal the avant-garde spirit of the master of the house, who, unlike his Beirut contemporaries, preferred modern styles to the more traditional Louis XV-style furniture of his contemporaries.

On the second floor, scattered among the offices, the reading room and the vast library, sit several iconic Bauhaus furniture pieces. These include Marcel Breuer's famous Wassily chair, created in 1925, with its leather straps, and Ludwig Mies van der Rohe's tubular steel and rattan chair from 1926. 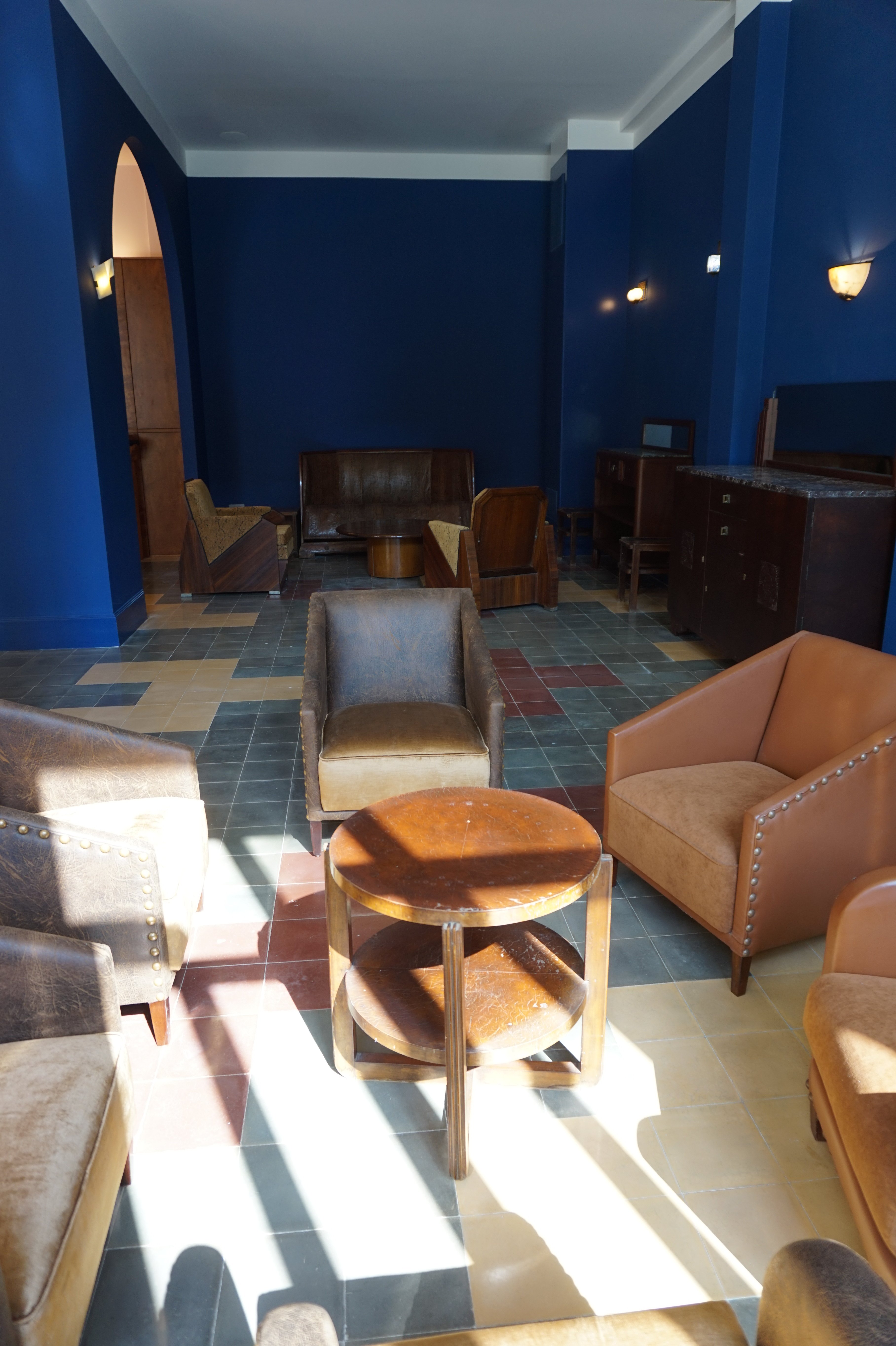 A corner of the building's lounge area, with art deco furniture dating to the 1920s. (Credit: Carla Henoud/L'Orient-Le Jour)

But it is a gleaming black body of a 1923 Ford Model T Touring car, placed right in the center of the room, that makes the boldest statement.

Scattered throughout the rest of the building are office furniture pieces from the 1920s, with a “very Al Capone style,” as the poet’s son likes to call it, a typewriter from the same period and his collection of drawings and sculptures by Youssef Howayek (1883-1962), an artist he had supported. The works of Daoud Corm (1852-1930), the “patriarch of Lebanese painting” and poet’s father also adorn the walls.

The upper floors of the building were originally reserved as bedrooms for the family as well as a private cinema. Now these floors will house an archive dedicated to "the traces of the Phoenicians collected throughout the Mediterranean and elsewhere, wherever they would have had a rope [or a] a warehouse,” according to David and Hiram Corm. 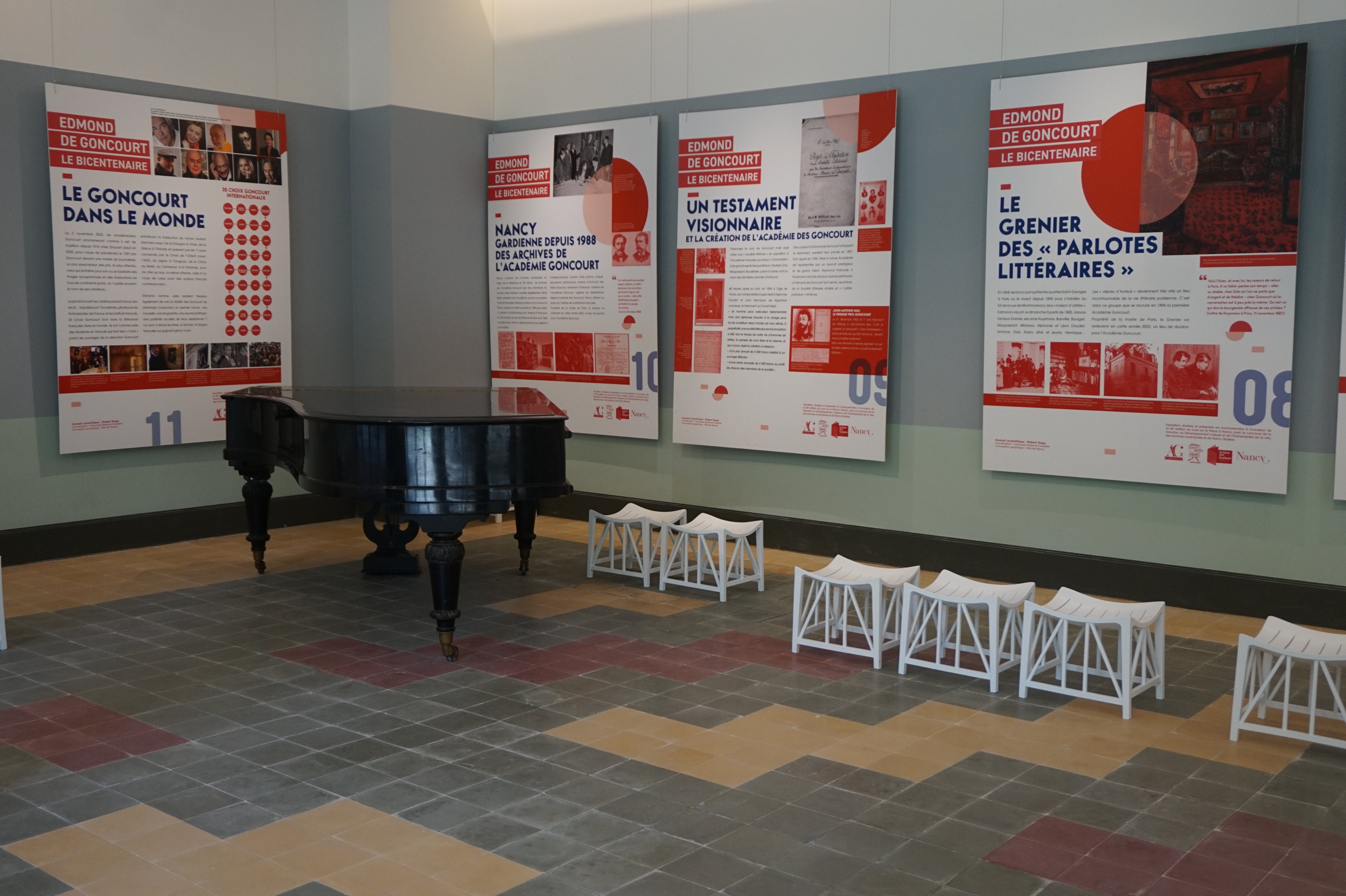 A view of the Goncourt exhibition in the former Ford car showroom. (Credit: Carla Henoud/L'Orient-Le Jour) 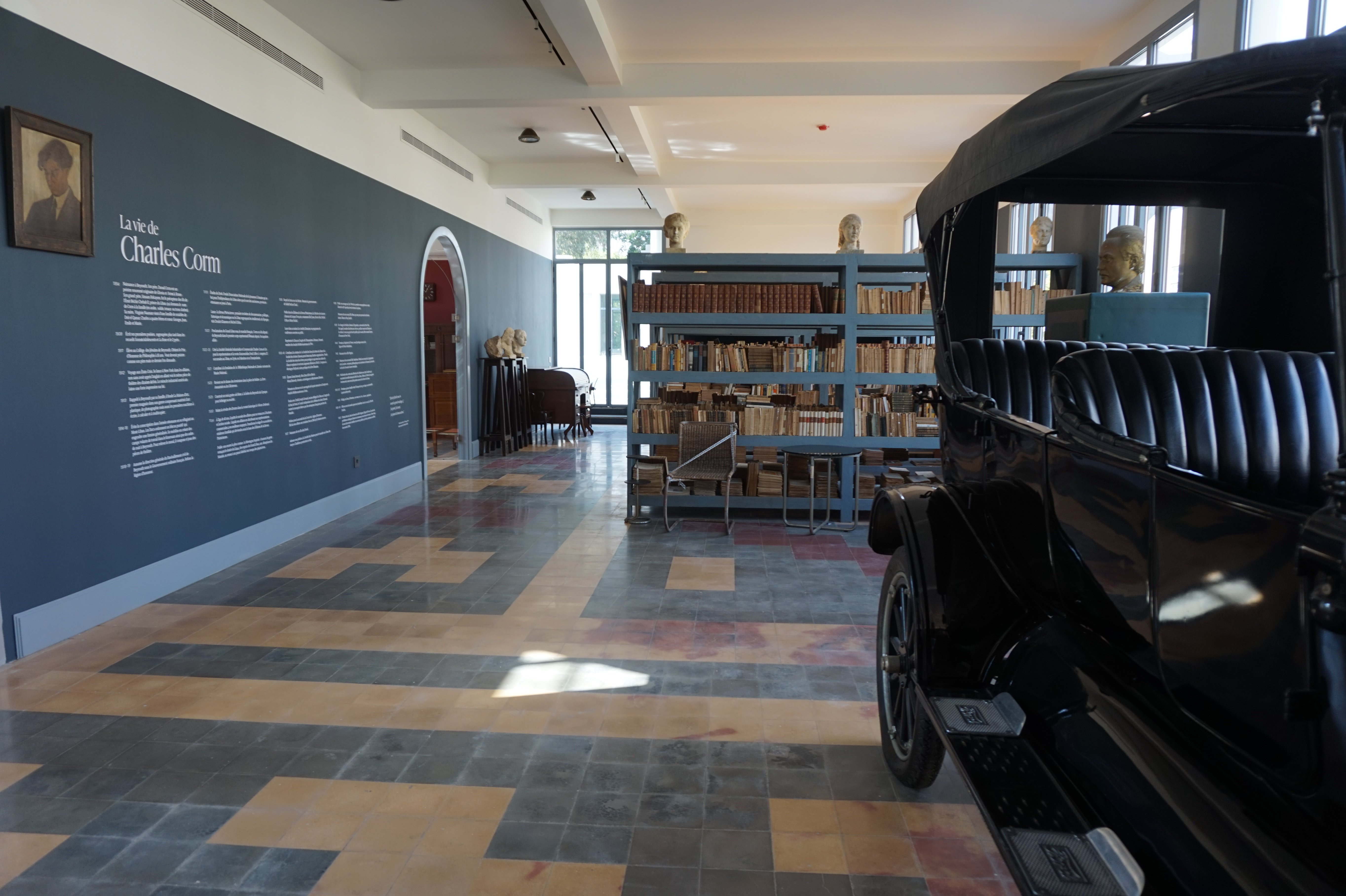 Other rooms will also be used for conferences, discussions and debates. The old car showroom will remain as is, though for art exhibitions rather than automobiles. “The aim is to highlight contemporary creation," says Hiram Corm, who also plans to open a cafe “for visitors and students.”

Outside, the garden, which was devastated during the war, has been restored to its original splendor.

Jasmine, rosemary, ferns, bamboo and small palms now live again in the shade of the property’s large cypresses, not far from the busts of Khalil Gibran and Charles Corm, which had been buried during the war to protect them from looting. Nearby are also the Roman milestones that the poet reportedly collected and brought back from his travels.

In short, the building has at long last been restored to its former beauty.

“The Goncourts” is on display at the Corm Building until Dec. 10. Visits by appointment. Tel. 03- 35 14 71 or by mail at the following address: [email protected]

It is a white house like no other; a unique piece of architecture in Beirut with its eclectic avant-garde combined with elements of the past.This modernist-style Corm Building, inspired by New York skyscrapers, has long dominated the Lebanese capital with its singular presence. This is because, until 1958, it was the tallest tower in the city, with a height of 35 meters. Planned and built by...