Each year, after the first heavy rains of autumn, people across the mountainous regions of Lebanon go into the woods to hunt for wild snails. 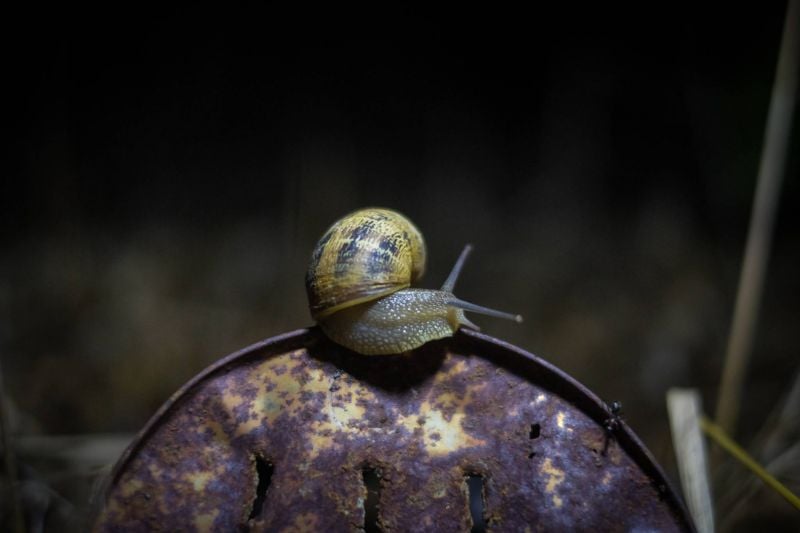 BAYSOUR, Mount Lebanon — The sun sets over a terraced patch of farmland in the mountains just outside Beirut, and three young men turn on their battery-powered lights to scan the brush.

About 10 minutes in, they find what they’re looking for: a snail, albeit a small one.

The three men, all cousins in their 20s, are hoping to gather wild snails for their families to cook in butter, cilantro and tarator sauce. In one part of the orchard, a plastic crate wrapped in cloth mesh already contains about 150 live snails, foraged after Wednesday morning’s rain shower. It’ll be enough to serve as a side dish during a big meal with family and friends to celebrate the fall season.

Each year, after the first heavy rains of autumn mark the end of summer, the three cousins – and countless people across mountainous regions of Lebanon – go out into their gardens, the woods or anywhere the ground has been newly saturated with rainwater to hunt for wild snails. Nighttime is best.

After having burrowed underground for months to wait out the dry summer heat, the snails emerge with the cooler weather.

The autumn rains arrived somewhat late this year, not properly inviting the snails aboveground until Sunday evening when a massive thunderstorm hit much of the country, flooding roads and— crucially — soaking the parched topsoil. On Wednesday morning, it rained yet again.

That’s when Naja Malaeb and his cousins knew it was time to go looking for snails. 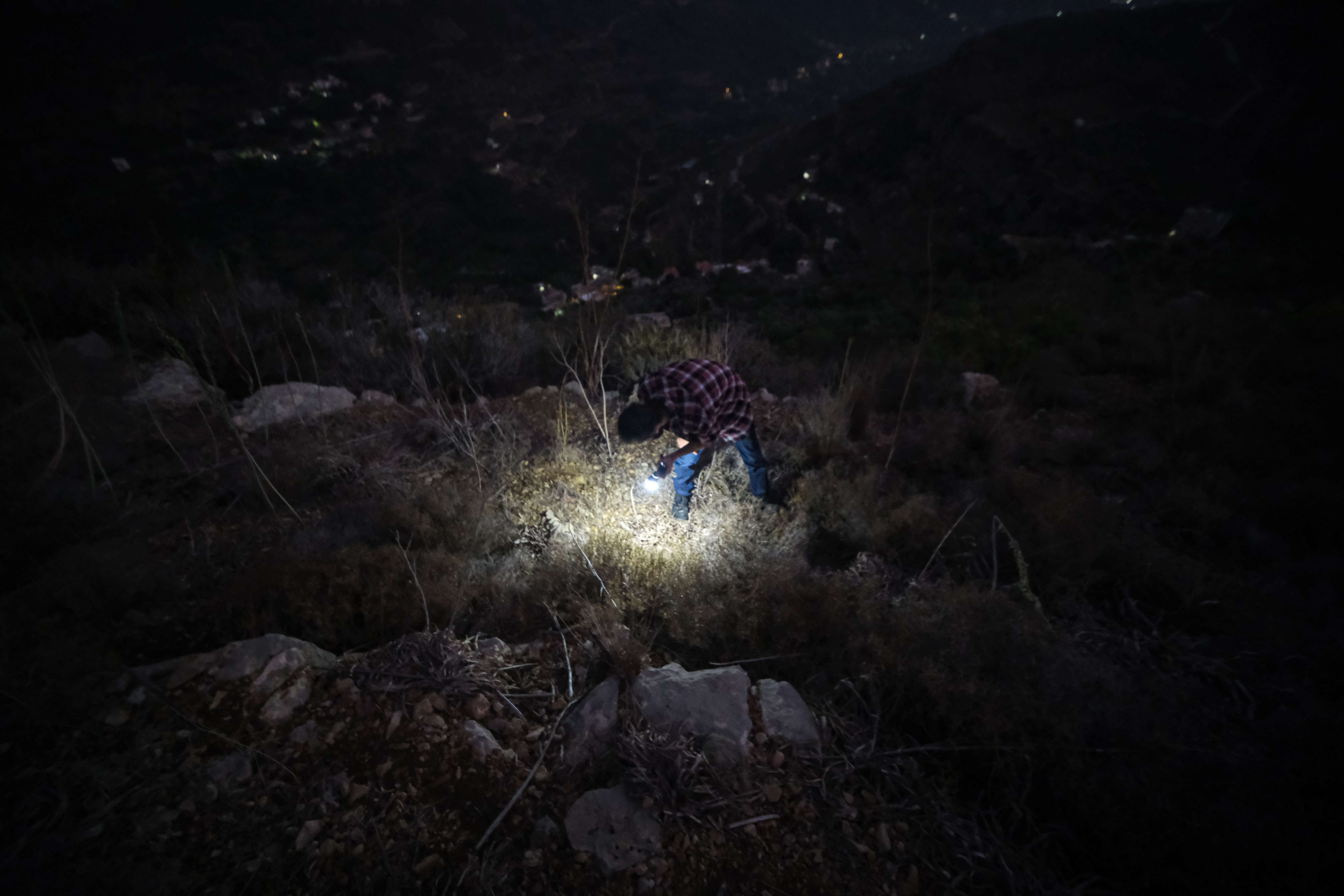 Naja is from the mountain town of Baysour, a roughly 25-kilometer drive southeast of Beirut. He says he’s been foraging for snails each autumn since he was 10 or 11 years old when his older family members started letting him tag along.

Now 28 and living between Lebanon and Qatar, he spends as much time as he can at home. When those trips home coincide with autumn, he forages for snails once again.

The snails are “a traditional food for the family, for everyone to gather with friends,” he told L’Orient Today in the days leading up to the first big rainstorm.

But not everyone is a fan. Naja and his cousins, Daniel and Bilal, say some of their friends tolerate eating them, while others can’t stand the “chewy” texture.

On a 2018 episode of one popular Lebanese cooking show, host Chef Antoine introduced snails as a delicacy that “some people don’t eat at all, and that some people wait for each year.” Daniel, himself a former chef and an organic vegetable farmer, admits he doesn’t like the taste of snails but enjoys the tradition anyway.

“It’s for fun more than for eating,” he says.

“You can usually find them on rocks,” Naja points out. One snail, about the size of a golf ball with brown markings on its shell, crawls across an open patch of dirt. The dark shell means it’s a “black snail,” Naja explains. People usually prefer the white-shelled ones, though the cousins don’t exactly agree on why.

The white ones “are fattier,” Bilal says. “My dad once said the white ones taste better, so that got passed down to me,” Naja adds.

Nearby, a pair of men walk down a dark road carrying plastic shopping bags full of newly-foraged snails. Another group of flashlights twinkles in an olive orchard not far away. 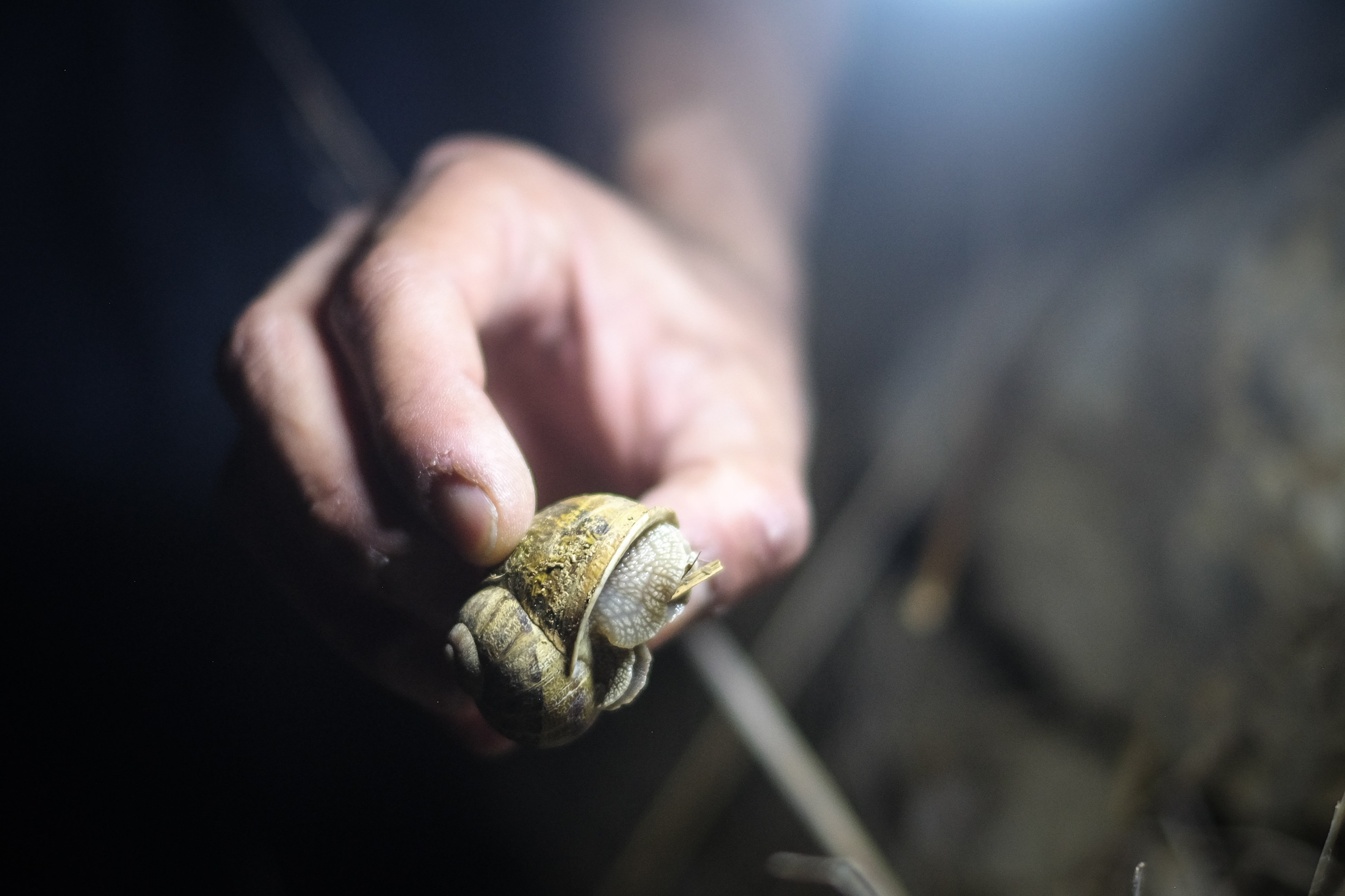 A tradition impacted by crisis?

Purpose-built heliciculture, or snail breeding, farms have been on the rise in Lebanon in recent years, according to a 2017 report by Lebanese University agriculture expert Hussein Hammoud. Lebanese grocery website Chterelebnené offers 100 pre-cooked snails from the Zahle snail farm Snailand for LL400,000 — about $11 according to the latest parallel market exchange rate.

A single serving of escargot made with locally-raised Lebanese snails costs LL400,000 at Beirut restaurant Le Petit Gris, according to an employee. Meanwhile, in Baysour, Naja estimates a bag of 100 raw, locally foraged snails can sell in town for about LL200,000.

Still, home foraging remains the traditional way for rural households to find snails they can feast on each autumn. But can the current generation keep up the annual tradition?

For the past three years, Lebanon has suffered an unprecedented financial crisis that decimated the local currency, essentially erased millions of people’s life savings and drove large portions of the country’s youth abroad.

“Everyone is outside Lebanon now,” says Wael Malaeb, Naja’s uncle. Also raised in Baysour, he used to take Naja snail foraging each fall, teaching him how to look in the right spots.

Wael’s last autumn snail foraging was in 2020 before he left Lebanon’s deteriorating economic situation. He’s been in Melbourne for about a year now, he tells L’Orient Today by phone.

Before he left Lebanon, Wael says, he was somewhat of a snail-foraging aficionado.

Now, things have changed. “Everyone is unhappy with the economy, and nobody cares,” Wael says. 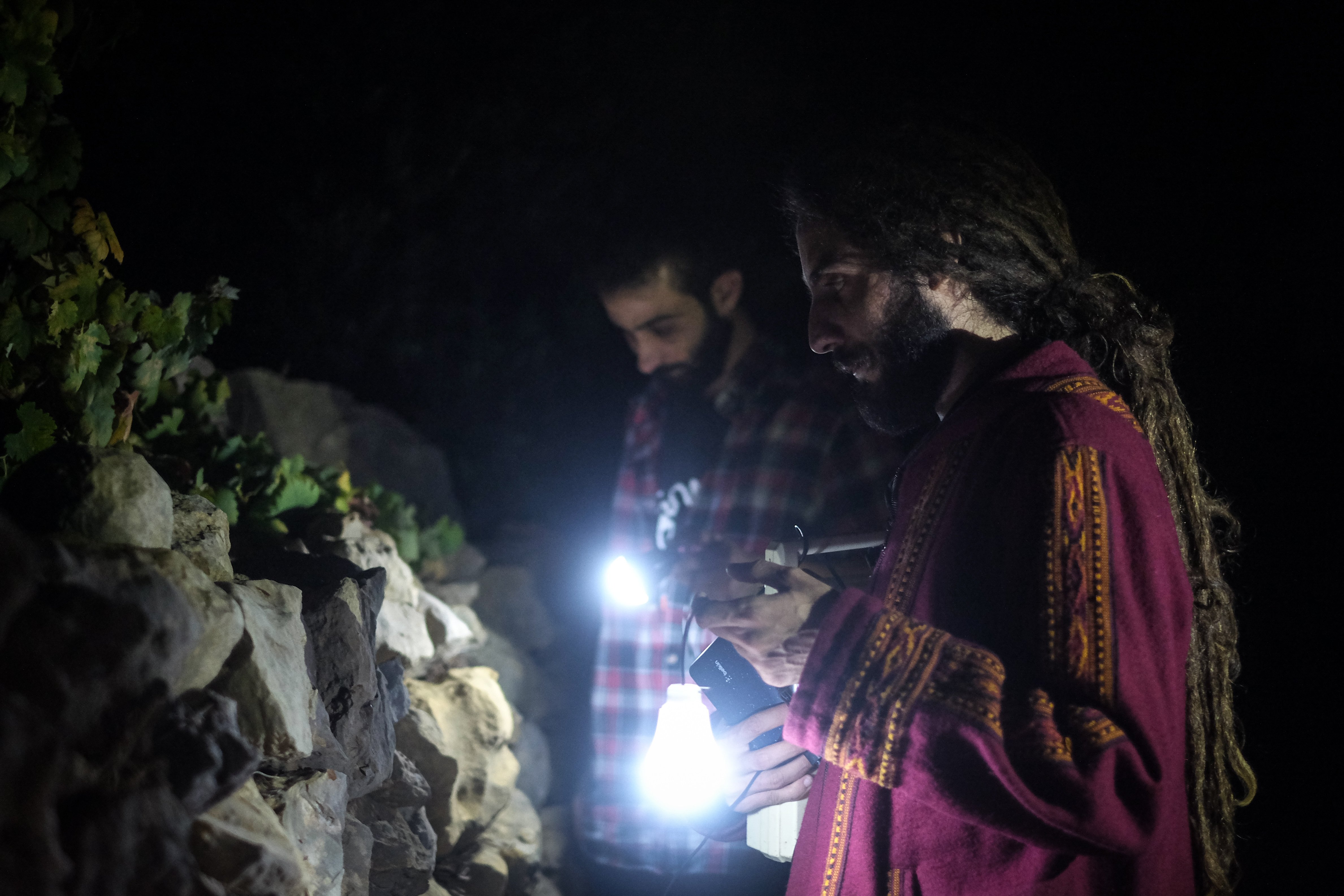 Passing down a childhood tradition

Naja remembers the first time he went snail foraging. An uncle walked ahead of him, placing the snails he himself had already foraged back into the dirt so Naja could “find” them.

“I thought I had gotten more [snails] than him and my father,” Naja recalls. “It was the best time.”

Daniel remembers the post-midnight darkness, heavy rainfall, and his uncle carrying along a shotgun in case of wild dogs and boars.

Rima, who lives in the nearby village of Ghaboun, didn’t grow up snail foraging but started after she married her husband nine years ago. She requested a pseudonym to keep her privacy.

Now a mother of three, she takes her oldest daughter snail foraging with her. “She’s eight years old, and she loves catching snails,” Rima tells L’Orient Today by phone. She says they foraged 300 to 400 snails after Sunday’s massive rainstorm.

Rima is the one who cooks them, she explains, but that will need to wait a week or two.

First, the foragers need to starve the snails to purge them of feces. About a week or two later, they separate out inedible snails and rinse the remaining ones thoroughly. The snails are then boiled for several hours and served with different spices, herbs and sauces. 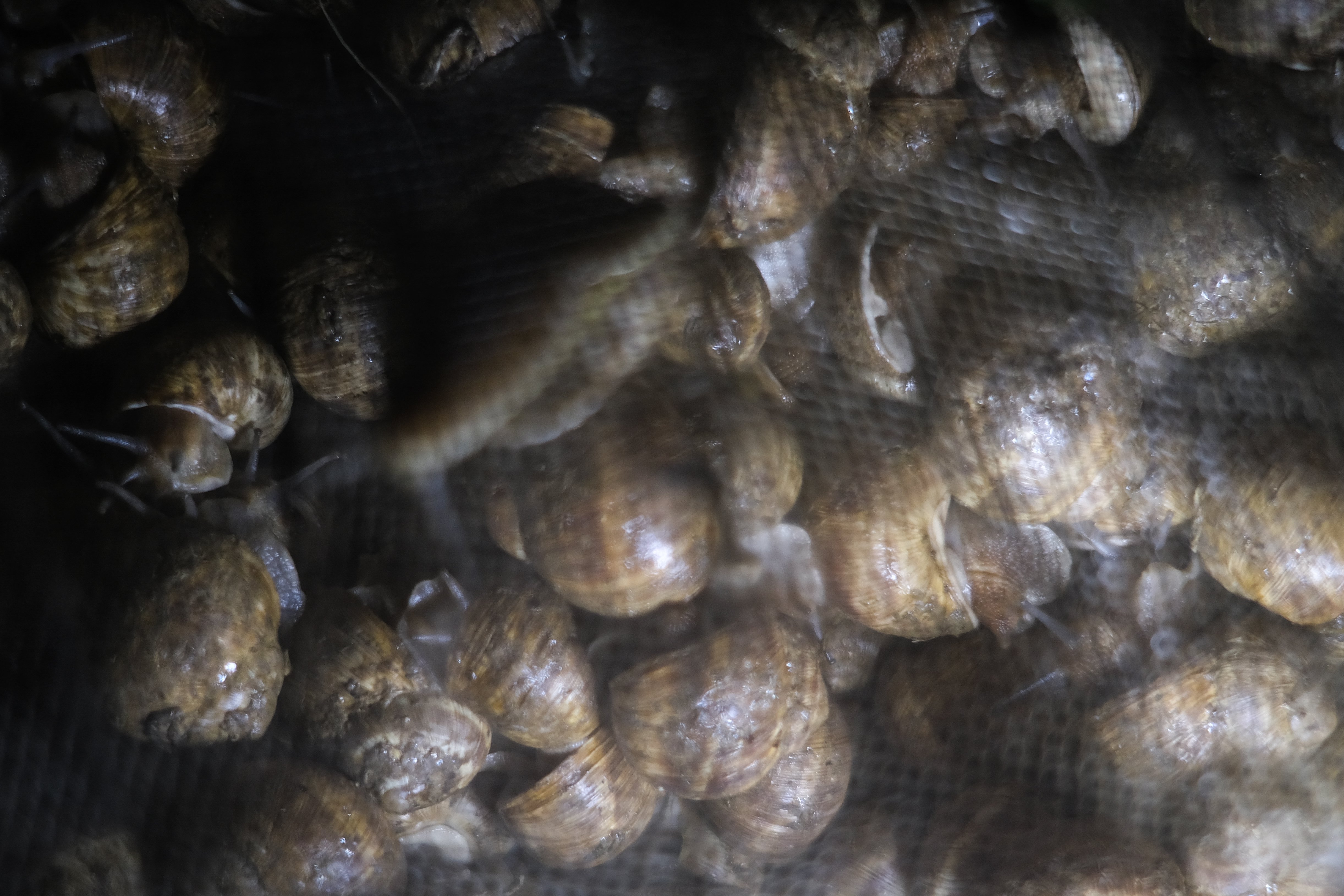 Snails foraged from the cousins’ farm plot in Baysour, Oct. 26, 2022. They plan to store the snails in the crate for a week or two before sorting and cleaning them in order to cook them for a family meal. (Credit: João Sousa/L’Orient Today)

After Wednesday night’s foraging, Naja, Daniel and Bilal sit together in Daniel’s stone farmhouse for tea and cigarettes. A black sobia oven, meant for heating the room, sits dormant as the air isn’t yet cold enough.

Asked if they think the annual snail foraging tradition will be passed down to future generations, the cousins are unsure. Unlike Rima, they don’t have children of their own. They say many parents in town seem afraid to let their kids go out to search for snails at night.

But mostly, there’s the problem of younger generations leaving the country entirely.

“Every month, someone leaves,” says Daniel.

They hope the families that stay will pass on the autumn tradition.

“I believe in staying here. I believe I can do something here,” Naja maintains. “Despite everything, I want to stay.”

BAYSOUR, Mount Lebanon — The sun sets over a terraced patch of farmland in the mountains just outside Beirut, and three young men turn on their battery-powered lights to scan the brush.They search between rocks, thorned bushes and black plastic water pipes crisscrossing their family’s farm plot.About 10 minutes in, they find what they’re looking for: a snail, albeit a small one.The three...