Bassil ready for 'dialogue with everyone' on presidential election

"We will not allow the jurisdiction of the President and his position in the government formation process to be transgressed," Bassil said during a speech in front of his followers in Forum de Beirut 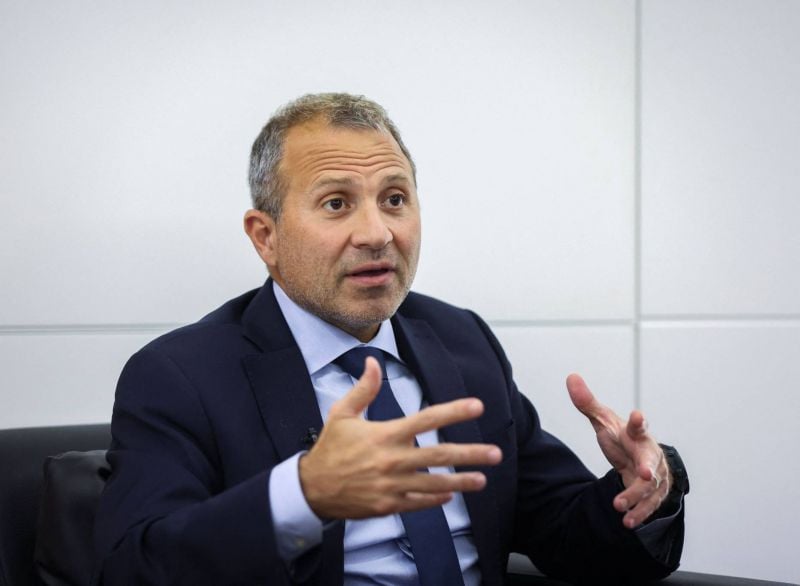 Head of the Free Patriotic Movement, MP Gebran Bassil, gestures as he speaks during an interview with Reuters in Sin al-Fil, Lebanon Oct. 13, 2022. (Credit:Mohamed Azakir/Reuters))

BEIRUT — The Free Patriotic Movement is ready for "dialogue with everyone" on the Lebanese presidential election, said party leader Gebran Bassil during a speech Saturday night in front of his supporters at Forum de Beirut.

Bassil remains an unofficial candidate, though several analysts say his chances of being elected are slim to none.

With only 16 days remaining before the end of President Michel Aoun’s term on Oct. 31 — and after Parliament already failed twice to elect a new head of state — Bassil said his party "will not accept a president who does not have a popular and representative position, or who is not supported by a popular and Christian parliamentary bloc, in particular."

"We refuse to have a president appointed from 'outside,'" he added.

'We can change our minds'

In Saturday's speech, Bassil said: "did not yet nominate myself for the presidency so that I don't crowd anyone and so that we don't complicate the matter. But I can change my mind."

The FPM leader claimed his party is "trying to make things easier, but not so that people would underestimate us or disrespect us."

Wanting the presidential dialogue to be conducted under the leadership of Bkirki or Baabda, Bassil lead a delegation of his Strong Lebanon parliamentary bloc, held Wednesday with Maronite Patriarch Bechara al-Rai and President Michel Aoun. It was an opportunity for the party to hand its political roadmap to the country’s two highest Maronite authorities, in view of the presidential election.

No option other than pragmatism for Gebran Bassil

On Thursday, Parliament failed to reach the two-thirds quorum required to hold a second presidential election session. Only 71 of Parliament’s 128 MPs attended the session. MPs from the Strong Lebanon bloc (17 Free Patriotic Movement MPs and three Armenian MPs from the Tashnag party) boycotted the session, claiming the date — Oct. 13 — coincided with the 22-year memorial of Syrian troops ousting FPM founder and then-army-Chief-cum-Prime-Minister Michel Aoun from Baabda Palace. These MPs claimed the commemoration was "more important than anything else," according to Bassil.

In his Saturday night speech, Bassil invited his fellow MPs to reach a consensus around a new president "before the vacuum," expressing his party's wishes to elect a "reformist" president who "is not a prisoner of the system and subject to it, neither by its history nor by its path."

The FPM leader indicated that Aoun "will return to Rabieh to complete the challenge of state-building and liberate Lebanon from the financial turmoil."

"Yes, Aoun will return after Oct. 31, liberated from the presidency's restrictions. And with him, we continue, we continue stronger," Bassil said.

Commenting on government formation, Bassil said "reforms need a government and a president. The priority is, of course, for the new president, but the government must be formed to be an 'insurance policy' in the event of a vacuum."

Lebanon's government has been in a caretaker capacity since May 15, following the country's 2022 parliamentary election. Disagreements between caretaker Prime Minister Najib Mikati and President Aoun are the reported cause of delays, with the two bumping heads over the prerogatives of a caretaker cabinet in the event of a presidential vacancy.

He continued: "A caretaker government lacks powers; it cannot meet or take decisions; it cannot assume the powers of the President — it lacks the authority and confidence from the Parliament. How does it want to take powers that it does not have?"

Bassil also commented on the maritime border agreement reached between Lebanon and Israel.

"The victory of the maritime borders does not replace the victory over corruption, nor does it absolve us of doing reforms," Bassil said. "It is true that our team made a great achievement for Lebanon, not only with the maritime borders, but also with the oil wealth, and most importantly by dedicating and guaranteeing our right to extract it."

Bassil, who is facing sanctions from the US for "corruption," told Reuters on Thursday that he played a behind-the-scenes role in the US-brokered talks to delineate Lebanon’s maritime boundary with Israel by liaising with Hezbollah, the powerful armed Iran-backed militia that is a sworn enemy of the Jewish state.

Bassil, sanctioned by the US, says he played behind-the-scenes role in border talks

Bassil told Reuters in an exclusive interview that, despite the sanctions, his involvement in the negotiations was not an effort to remove his name from the US blacklist.

The American ambassador to Lebanon, Dorothy Shea, earlier told Reuters that Bassil had not requested sanctions be lifted in exchange for political overtures, including helping secure a maritime border agreement.

“It’s not how sanctions work. We’re not that cheap,” Shea said.

"We took all of the Qana field, even though it is not completely within our area," Bassil said, complementing the added efforts of Hezbollah's head Hassan Nasrallah "with the strength of the resistance, its missiles, and its trajectories."

France, the other mediator in the maritime deal

Hezbollah previously sent three unarmed drones in the direction of the formerly-disputed Karish gas field and exchanged war threats with Israel over the maritime demarcation.

Under the recent agreement, the Karish offshore field will fall under Israeli control while the Qana reserves, located further northeast, will be granted to Lebanon. However, since the Qana field is intersected by the future demarcation line, Israel will receive a share of future revenues from Qana gas production.

According to Lebanese Deputy Parliament Speaker Elias Bou Saab, an agreement has been reached between the French giant TotalEnergies, which is expected to explore the Qana field, and the Israelis under which the latter would "receive compensation" from the energy giant and not Lebanon.

"We said that this was for the benefit of Lebanon, that you should not be afraid of war. That this is how the agreement will come quickly and in our favor," Bassil added.

Bassil said that "the required economy is the productive economy, and oil is a part of it, but not the whole. Oil is not to settle our debt."

The maritime agreement between Lebanon and Israel should remove obstacles to the exploitation of gas fields in the eastern Mediterranean.

Lebanese authorities are counting on the presence of hydrocarbons to help mitigate the economic collapse but, according to experts, the country needs five to six years before benefiting from possible gas and oil windfall.

BEIRUT — The Free Patriotic Movement is ready for "dialogue with everyone" on the Lebanese presidential election, said party leader Gebran Bassil during a speech Saturday night in front of his supporters at Forum de Beirut. Bassil remains an unofficial candidate, though several analysts say his chances of being elected are slim to none.With only 16 days remaining before the end of...