No end to Ogero strike, Hochstein in Beirut, Parliament to discuss overdue budget: Everything you need to know to start your Friday

Here’s everything that happened yesterday and what to expect today, Friday, Sept. 9: 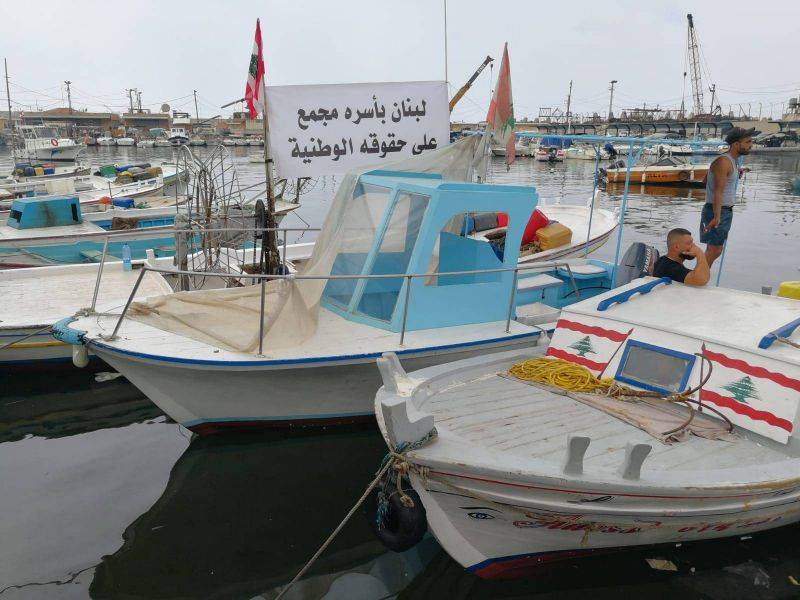 Photo shows boats ready to launch in Saida, with a slogan affirming Lebanon's right to its offshore gas wealth. (Photo sent by our correspondent Mountasser Abdallah)

The families of the victims of Beirut’s Aug. 4 explosion held a sit-in outside the home of the head of the Higher Judicial Council, Souheil Abboud, one of several protests after the council’s approval of the Tuesday decision to appoint an alternate judge in the investigation into the Beirut port blast. The families were met with security forces, who blocked the entrance to the building, as protesters versed messages towards Abboud's home on a megaphone. The investigation into the explosion, led by Judge Tarek Bitar, remains suspended. On Wednesday, Aug. 4 victims’ families gathered outside the Justice Palace and Justice Minister Henri Khoury’s home. The families were seen gathering on the fourth floor of the building where Khoury reportedly lives. "You are assassinating the law, they are assassinating our case," one protester said. A blast victim’s father present at Wednesday’s sit-in in front of the Justice Palace told L’Orient Today that the decision was an attempt to “obstruct” the investigation and free the detainees.

US envoy Amos Hochstein is set to return to Lebanon for a visit today to make, according to Deputy Parliament Speaker Elias Bou Saab, “another positive step” towards a solution to the maritime border dispute with Israel. His visit to Lebanon is reportedly only two hours long. Hochstein has been mediating the indirect negotiations between Lebanon and Israel in an attempt to resolve a dispute over exploration rights to the Karish field, the site of a floating production and storage vessel deployed by Israel in June, prompting outrage by Lebanese authorities. Energean, the London-based oil drilling and gas wells company working on the Karish field, said Thursday it was “on track to deliver first gas from the Karish development project within weeks.” Hezbollah head Hassan Nasrallah previously expressed readiness to militantly resist Israeli oil and gas extraction efforts that occur “before Lebanon gets its rights.”

State telecom provider Ogero employees will remain on strike after rejecting proposed social assistance payments in lieu of a salary raise, caretaker Telecom Minister Johnny Corm said in an interview with the “Voice of Lebanon” radio station. Corm estimated that the strike, which began on Aug. 30, will “cost the country a great deal” as telecom outages proliferated while attempts to mollify the striking workers through various cash grants failed. “The state does not have [enough funds in] reserve, so it is not possible to treat all the public sectors fairly,” Corm added as demands for improved compensation echoed across different sectors. Also on Thursday, Lebanese University full-time professors, who have been on an open strike since July, renewed their calls for delayed payments and salary modification, without which “there will be no [new] university year and no ending of this year,” referring to the suspension of final examinations. Amid a slew of outcries from public sector employees, Maurice Slim, caretaker minister of defense, increased soldiers’ transportation allowances.

Parliament will convene next week to discuss the long overdue 2022 draft budget, which the parliamentary Budget and Finance Committee had completed examining on Aug. 25 despite criticisms from some of its members. Cabinet approved the draft budget in February and was reviewed by the parliamentary Finance and Budget Committee, albeit without consensus on the exchange rate to be taken into account to calculate expenditures and revenues. “We’re between a rock and a hard place,” committee head MP Ibrahim Kanaan said in August, in reference to whether or not the budget, which another committee member claimed had a “lack of clarity,” would be adopted after being forwarded to the general assembly. Pending the adoption of a budget for the current year, Lebanese authorities have been operating under the provisions set by Article 86 of the constitution, which allots one-twelfth of the budget provided for in the previous year’s finance law. The article had been invoked between 2005 and 2017, during which the state operated without an official budget. The International Monetary Fund mandated in its April preliminary agreement with Lebanon the adoption of a credible state budget as a mandatory reform to unlock a multi-billion-dollar aid package.

Lower grade fuel and a technical failure were to blame for the thick black smoke that emanated from the Zouk Mosbeh power plant this week, state-owned electricity provider Electricité du Liban said. The black smoke was seen rising from the power plant on Tuesday, prompting concern over environmental damage and health risks to the area’s residents. EDL opted for the “exceptional” use of Grade B fuel oil instead of grade A to keep crucial facilities, such as the airport, operational. The Energy Ministry said Wednesday that the latest shipment of Iraqi oil, on which the state relies to fuel power plants, was delayed due to “security incidents,” in reference to recent violence in Baghdad. Fuel shortages have forced EDL to alternate operations between its power plants to maintain reserves and extend coverage. Responding to the country’s “intermittent and unreliable” electricity supply, the United Nations Interim Force in Lebanon on Thursday donated a solar power system to the Lebanese Army.

In case you missed it, here’s our must-read story from yesterday: “Maritime border: What can we expect from Hochstein’s Beirut visit tomorrow?”

Want to get the Morning Brief by email? Click here to sign up.The families of the victims of Beirut’s Aug. 4 explosion held a sit-in outside the home of the head of the Higher Judicial Council, Souheil Abboud, one of several protests after the council’s approval of the Tuesday decision to appoint an alternate judge in the investigation into the Beirut port blast. The families were met with...