In part six of L’Orient-Le Jour’s series on women who had an impact on the region, we meet Lalla Fatma N'Soumer, a freedom fighter and mythical figure known as “The Disobedient,” “The Rebellious” and “Djurdjura’s Joan of Arc" for her struggle against the French conquest of Algeria. 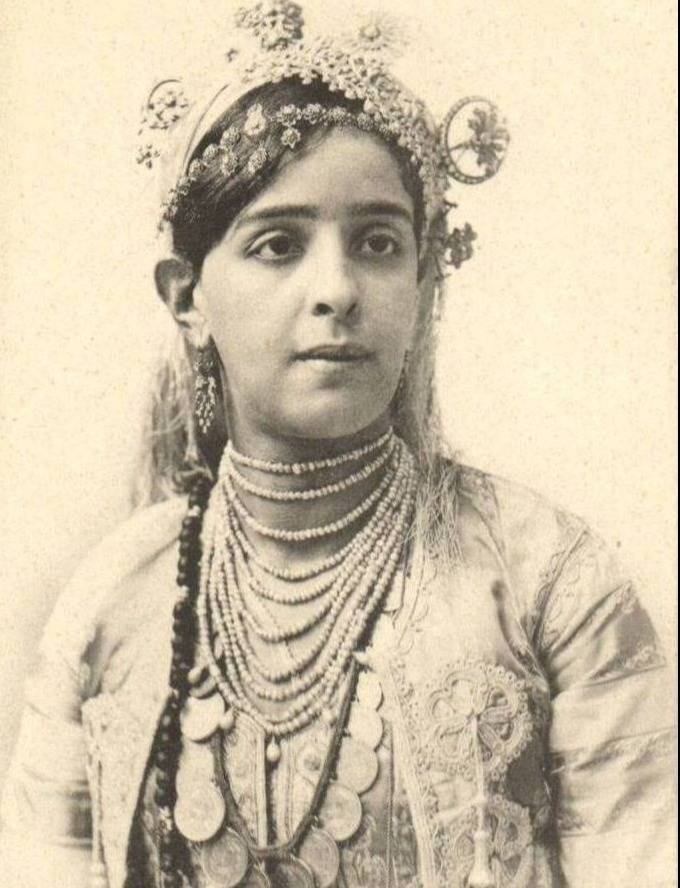 A postcard dated around 1904, inspired by Lalla Fatma N’Soumer and entitled “Belle Fatma,” kept at the National Museum of the Algerian Revolution. Wikimedia Commons

The story of Lalla Fatma N'Soumer was romanticized and even mythologized by those who saw in her the continuation of Kahina, the Berber warrior-queen who led the fight against the Arab invasion of the Maghreb in the seventh century.

Fatma N'Soumer was a prominent Kabyle female figure who defied the French colonial army in Algeria, leading entire villages into battle and breaking the socio-political codes of her time.

The young woman devoted her life to the cause — that of the Kabyle resistance to the occupation of her village, and more widely to France’s colonization of Algeria. According to an account of her life told by Radio France, she died in 1863 at the age of 33 while imprisoned in the Zawiya al-Isawiyya (a Sufi institution) in Tablat, Kabylia. She had been captured on the battlefield in July 1857 by renowned Gen. Yusuf, the head of France’s Algiers division.

Rumors at the time said she died of grief after the assassination of her brother and right-hand man, Sidi Tahar. But the poor conditions in which she was held for six years are the more likely cause of her death.

Fatma N'Soumer, born Fatma Sid Ahmed Ou Meziane, grew up in the mountains of Kabylia, a historical region populated by warrior tribes in northern Algeria, in the heart of the Djurdjura mountain range. She was from the village of Ouerdja.

Whether by some divine coincidence, a curse or a twist of fate, upon the orders of King Charles X, France began its vast conquest of Algeria in the exact year that the woman who would later challenge their occupation was born: 1830.

Algeria remained a French colony until it declared its independence in July 1962, ending eight years of civil war.

The few pieces available of her story agree: Fatma N'Soumer, war leader and spiritual guide, left her mark on the minds of all those who crossed her path, enemies and supporters alike.

Though apparently short and stocky, her beauty and elegance comprised the lyrics of popular Berber poems. Her sharp black eyes, around which she wore kohl, were said to be the same color as her long braided hair.

French politician Émile Carrey wrote in his 1857 book Récits de Kabylie that she was draped in colorful scarves, adorned with jewels and covered with henna when she led the imseblen, those who had volunteered to die as martyrs, into battle.

And she refused the consummation of a marriage imposed on her at age 20 by one of her brothers after the death of their father, breaking a sacred patriarchal link in a society with an extremely conservative social framework, according to political scientist Feriel Lalami Fates.

The young woman never became a mother and was not kept away from public life. Instead, she burst into it not only as a fighter herself, but also as a military leader and strategist, and became part of spheres of thought that were strictly reserved for men. Her nickname, Fatma N'Ouerdja in the Kabyle language — “one who refuses to comply with customs” – hints at her temperament. Those who share this rebellious spirit are still given that same nickname.

Her first victory was perhaps that of having succeeded in being educated in her father’s Zawiya, at a time when girls were not allowed such opportunities. This Quranic school of the Rahmaniyya Sufi brotherhood allowed Fatma to refine her gifted eloquence, to sharpen her sense of analysis and nourish her spirit in the religion.

Said to have spent entire days and nights in prayer and meditation, Fatma N'Soumer was considered by those around her as a sort of prophetess. It was this aura that allowed her later to galvanize the resistance against colonization.

Fatma N'Soumer drew her legitimacy as a leader from her sacred character, which, in the mind of the pious Kabyle tribespeople who had mystical aspirations, resonated powerfully.

Oftentimes her premonitions and predictions proved to be right. In the eyes of the tribes that followed her, these forecasts became divine premonitions.

While her strong character and spirit allowed her to emancipate herself from the domestic role that was predestined to her, she also likely benefited from the social legitimacy that her lineage gave her: the Aït-Sidi Ahmed.

Descendant of these powerful literate marabouts, or Muslim holy men, Fatma N'Soumer was given the honorary title of “Lalla” as a mark of respect.

After escaping from her marriage, oral accounts say that Fatma N'Soumer joined her brother Sidi Tahar in the village of Soumer, which became her adopted village and patronymic for the resistance she led there. Taken in by the local political authority, she joined the 1850 uprising of Cherif Boubaghla, who was close to Emir Abdelkader and an initiator of a vast movement of popular Kabyle revolt when the French penetrated the Djurdjura region.

Algeria became constitutionally French in 1848, but the country resisted the occupation. Only the plains of Algiers, Constantine and Oran were in the hands of the enemy.

Kabylia, mountainous and difficult to access, was not a priority target. This offered a precious window of time, which the Kabyle resistance took advantage of to fortify itself and pose a danger to the occupied colonies.

For the French troops, the Kabyles’ submission then became essential. It was at the beginning of this French campaign in Kabylia, and following the death of Boubaghla in 1854, that Fatma N'Soumer took the lead in the resistance.

Though they were armed more heavily, the French army was undermined by Fatma’s clever strategy and fierce fighting. Among her victories, one stands out in particular: the battle of the Haut Sebaou in Tazrouk in June 1854, in which the withdrawal of a segment of the French forces requisitioned for the Crimean War the same year probably played in her favor.

Over the course of two months, Fatma N'Soumer, at the head of 5,000 Mujahideen fighters equipped with simple sabers and daggers, took advantage of the mountainous terrain to violently defeat the 8,000 French bayonets of Commander Charles Wolff. The humiliation was immense. The veterans were forced to retreat in the face of Berber tribes led by a woman.

But her prophecies and reputation did not exempt her from reality: the Kabyle were outnumbered. Determined to kill a resistance that had already inflicted too much damage, Gov. Randon in 1857 ordered reinforcements comprising 35,000 French soldiers to fight against the Kabyle.

Fatma N'Soumer was captured and imprisoned that same year, dealing a deadly blow to the resistance. Though her tomb in northern Algeria became a regional place of pilgrimage, her story escaped the collective Kabyle memory relatively quickly.

It was only more than a century later, in 1995, when her remains were transferred to the cemetery of El Alia in Algiers, in the Square of the Algerian martyrs and heroes, that the extraordinary fight of the “Joan of Arc of Djurdjura” resurfaced.

This article was originally published in French at L’Orient-Le Jour. Translated by Joelle El Khoury.

The story of Lalla Fatma N'Soumer was romanticized and even mythologized by those who saw in her the continuation of Kahina, the Berber warrior-queen who led the fight against the Arab invasion of the Maghreb in the seventh century. Fatma N'Soumer was a prominent Kabyle female figure who defied the French colonial army in Algeria, leading entire villages into battle and breaking the...