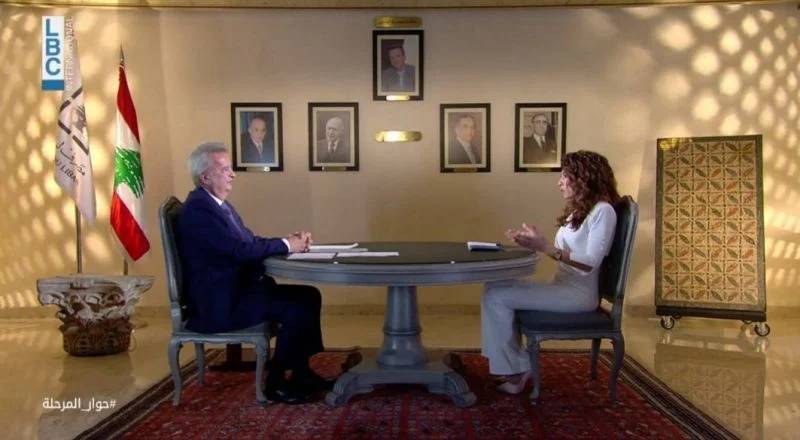 Lebanon’s central bank governor Riad Salameh said Tuesday night in a lengthy interview on local LBCI channel that banking secrecy in Lebanon should not be changed.

According to several local media outlets, at the time the interview was broadcast, a State Security patrol was searching his house in Rabieh, north of Beirut, at the request of Mount Lebanon’s Attorney General Ghada Aoun, who had issued a subpoena for him to show up for questioning.

During his interview with journalist Roula Haddad, Salameh said that in his opinion, banking secrecy in Lebanon, which has been enforced since the 1950s, should be kept as is, because “it does not apply to illicit transfers, originating from money laundering, tax evasion or terrorism.”

In these cases, the Special Investigation Commission (SIC) [is entitled] to lift bank secrecy anyway, he recalled. It should be noted, however, that Salameh himself is the chairman of the SIC.

Amending the bank secrecy law to bring it in line with international standards is part of the reforms demanded by the International Monetary Fund to provide Lebanon with a $3 billion loan over four years in aid to the country, which has been in crisis since at least 2019.

A draft law on bank secrecy was examined during the last session of Najib Mikati’s cabinet and submitted to Parliament.

The central bank governor also recalled that the Financial Action Task Force (FATF), which is an intergovernmental body to combat money laundering and terrorist financing, is expected to monitor the progress Lebanon made on this issue soon.

Commenting on BDL’s losses, which the government of Najib Mikati estimated (at $62 billion out of a nearly $72 billion in losses by the state), Salameh said that these losses were not caused by BDL’s mismanagement.

According to him, it was the government, through laws, that forced BDL to finance its expenditures, as well as to take out eurobonds (bonds in foreign currency) and debt in Lebanese lira.

At the official rate, Lebanon’s total debt is close to $100 billion. He thus assured that these losses are indeed in BDL’s accounts, but they are not in any way the central bank’s losses.

International law, and in particular the Bank for International Settlements, allows central banks to carry forward their losses from year to year. It is for this reason that he said that “depositors should not bear the state’s losses, which are recorded in BDL’s accounts.”

This is one of the most divisive points in the economic recovery plan, which requires a contribution from depositors with accounts exceeding a certain amount. The amount of $100,000 has been mentioned, but caretaker Deputy Prime Minister Saade Chami said that this figure could be revised upwards or downwards depending on the audit of the 14 largest commercial banks in the country, which account for the vast majority of total assets.

Salameh also mentioned a possible change in the exchange rate under circular 158, which was issued in June 2021 and came into effect in July of the same year, without giving further details.

This circular allows depositors to withdraw $400 dollars in cash and the same amount in Lebanese lira at an exchange rate of LL12,000 to the dollar (half in cash and the other half must be spent through bank card translations) every month from their dollar accounts blocked by banking restrictions.

According to him, 150,000 depositors have so far benefited from this mechanism, of which 30,000 have already recovered all their assets.

Salameh also mentioned Circular 161, which allows commercial banks to sell dollars to their customers at the rate of BDL’s Sayrafa platform.

This mechanism “serves to guarantee the salaries of civil servants in dollars at the rate of Sayrafa, and to protect what remains of the purchasing power of these workers,” he stressed.

He also stressed the “last correction” of this circular, a few weeks ago, which lightened the conditions of exchange, adding that this was to “put an end to speculation between the dollar rate on Sayrafa and that on the parallel market.”

In fact, the BDL statement announcing these changes led to the appreciation of the local currency against the dollar on May 27. The exchange rate fell from LL38,000 to the dollar at the start of the day, a record, to LL 28,000.

While these changes stabilized a market that had become extremely volatile after the legislative elections, they cost the BDL $500 million in the first half of June, according to various financial analysts, including Mike Azar.

Salameh stressed that the daily volume of exchange announced by BDL is not fully paid by the institution from its foreign exchange reserves.

He indicated that other players — various companies, including registered currency exchanges — also sell dollars, even if the BDL is not directly involved in the process.

Salameh said that, to get out of one of its worse contemporary crises, “Lebanon needs $15 to $20 billion dollars,” adding that the $3 billion that should be paid by the International Monetary Fund under its agreement with the country is not enough.

He said, however, that the IMF loan is necessary to be able to reinstate confidence among the population, something that was lost in 2019, and encourage other countries and agencies to help Lebanon financially.

This story story was originally published in French in L'Orient-Le Jour, translated by Joelle Khoury.

Lebanon’s central bank governor Riad Salameh said Tuesday night in a lengthy interview on local LBCI channel that banking secrecy in Lebanon should not be changed.According to several local media outlets, at the time the interview was broadcast, a State Security patrol was searching his house in Rabieh, north of Beirut, at the request of Mount Lebanon’s Attorney General Ghada Aoun, who had...