A rival sits out Lebanon's election. Now Hezbollah could fill the void 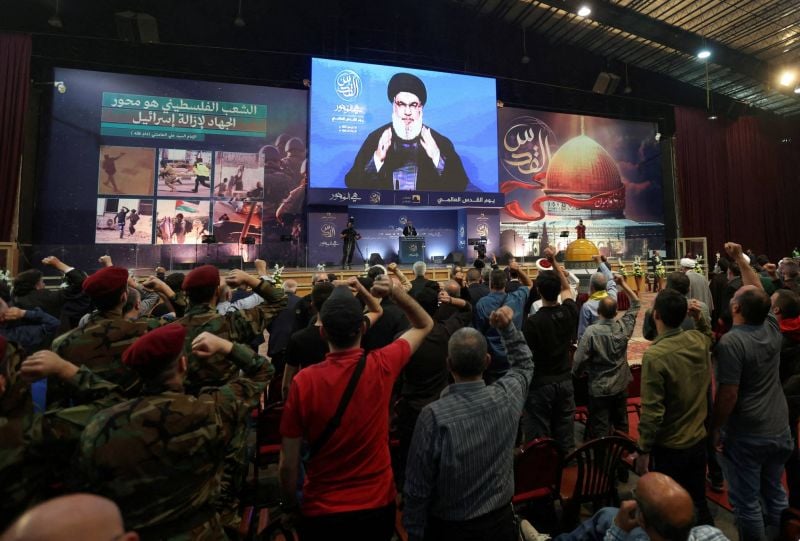 TRIPOLI — The stakes are high in Lebanon's elections. The heavily armed Hezbollah movement has seen one of its main rivals descend into disarray, handing it an opportunity to cement power over a divided country that's sinking into poverty.

Abdallah al-Rahman will not be casting a ballot, though.

"I won't vote for anyone," said the wiry-haired sculptor and activist, dismissing the candidates whose pictures are plastered on buildings and on giant billboards in Lebanon's second city of Tripoli ahead of the national parliamentary elections on May 15.

Rahman is from the Sunni Muslim community, one of the country's main sects and a traditional counterweight to Hezbollah, a powerful Iran-backed Shiite group.

Yet like many of his fellow Sunnis, he is skipping the election following the shock withdrawal of his community's longtime leader and figurehead, Saad Hariri, scion of a political dynasty.

Rami Harrouq, who lives in the Hariri stronghold of Bab al-Tabbaneh in northern Tripoli, will not be participating either. Alternative candidates have not impressed the 39-year-old factory worker, and he has been worn down by the country's economic collapse.

"We carry a lot of resentment against politicians — especially in Tripoli. These last two years have been full of misfortune for us," he said. "Of course I won't vote."

High abstentions among Sunnis — as well as a fragmentation of the Sunni vote as a result of Hariri turning his back on politics — could play into the hands of Hezbollah and its allies, who collectively won 71 of 128 seats when Lebanon last voted in 2018, according to some political experts.

"Because of what Saad Hariri did, Hezbollah now has two-thirds of the parliament within its sights," said Ibrahim al-Jawhari, a political analyst who served as an adviser to former Prime Minister Hariri, referring to the threshold that would shield the group and its allies from vetoes.

Hezbollah gains would reverberate far beyond this small country of about 7 million people. Israel, Lebanon's neighbour to the south, sees the group as a national security threat and has waged war against it in the past. Washington, London and much of Europe have classified it as a terrorist organization.

Such a political shift in the movement's favor would affirm Lebanon's position within the regional sphere of influence of Iran, which is waging a proxy battle with Sunni arch-rival Saudi Arabia across the Middle East and is at loggerheads with the United States.

Hezbollah is an organization that occupies a unique place in Lebanese society. It commands a paramilitary wing that some experts estimate has a more potent arsenal than the national army, while also running hospitals and schools — earning it the frequent description of a "state within a state."

The group itself has said it expects the make-up of the new parliament to differ little from the outgoing one and that it neither wants nor expects a two-thirds majority. Its main Christian ally, for one, is widely expected to lose seats.

Yet any expanded grip on parliament could give Hezbollah more sway over presidential elections later this year and over economic reform bills required by the International Monetary Fund, and even allow for amendments to the constitution.

It could also isolate Lebanon at a time when it desperately needs international support. Three-quarters of the population are below the poverty line amid an economic meltdown that many people blame on political paralysis and corruption.

Political loyalties in the country mostly follow sectarian lines and power is shared between Muslim and Christian groups in a complex system aimed at preserving a balance between factions that have taken up arms against each other in the past.

When Hariri announced in January he was stepping back from politics and that neither he nor the broader Future Movement would take part in upcoming elections, it was widely seen as a de facto boycott by the political heavyweight.

The move — which shocked supporters and rivals alike — capped years of political difficulties for Hariri. His waning fortunes have reflected a deterioration in relations with Riyadh, which cut ties with Hariri as Hezbollah's grip tightened.

"We shouldn't forget that since 1992 in Beirut, people had one name on their lips — Hariri. Whether Rafik or Saad, it was Hariri," said Fouad Makhzoumi, a Sunni businessman and member of Parliament who is running again.

"When it's no longer around, what do you do?" he said. "There's a sense of feeling lost."

Rafik, also a former premier, was assassinated in 2005.

While the Future Movement has not officially called for a boycott, its strongholds in Beirut are dotted with posters encouraging people to skip the vote and supporters have tweeted similar messages.

Turnout is expected to be particularly low in Lebanon's Sunni majority districts, according to independent pollster Kamal Feghali.

He told Reuters that about 30 percent of people who voted in those districts in 2018 have said they will not this year — with the highest level of disillusionment in Tripoli. That compares with a nationwide average of 20 percent.

Future Movement founding member Mustafa Alloush told Reuters he understood the disdain on the streets, but said sitting on the sidelines was not the answer.

The 64-year-old resigned from the party, delayed his retirement plans and chose to run as an independent because he feared the "vacuum" left by Hariri's withdrawal would allow Hezbollah-backed lists to sweep in.

"This is very dangerous, because it drops the electoral threshold and opens the door for those we talked about earlier, Hezbollah ... to get seats and take control of the city," he said.

Sunnis and Shiites are estimated to account for just under a third of the population each, with Christians making up an estimated 40 percent. Under electoral law, candidates cannot run as individuals but must run in lists.

In Tripoli's Sunni-majority northern district of Akkar, the FPM won five of seven seats in 2018. Four of the winning lawmakers are running again on two separate lists.

As the vote nears, leading Sunni figures have focused on trying to boost voter turnout nationwide.

Bahaa Hariri, Saad's older brother and political rival, founded a movement known as "Together for Lebanon" that has been broadcasting advertisements across radio stations encouraging people to vote, without naming preferred candidates.

In April, the religious head of Lebanon's Sunni community, Grand Mufti Abdul Latif Derian, declared in a sermon that all Lebanese should vote.

Jawhari, the analyst, estimated the fragmented and disillusioned Sunni community could hand Hezbollah and its allies at least six, but up to eight, additional seats in parliament "without having to do anything."

They would need to get to 86 seats in order to secure two-thirds of parliament, which would shield them from any vetoes emanating from a "blocking third."

A Hezbollah source said the group had not yet decided who it would back as Lebanon's next president, and said it supported talks with the IMF but was against any "conditional" aid.

The source added that Hariri's withdrawal could be a boon to Hezbollah's partners.

"It's natural and logical," the source said.

TRIPOLI — The stakes are high in Lebanon's elections. The heavily armed Hezbollah movement has seen one of its main rivals descend into disarray, handing it an opportunity to cement power over a divided country that's sinking into poverty.Abdallah al-Rahman will not be casting a ballot, though."I won't vote for anyone," said the wiry-haired sculptor and activist, dismissing the candidates...