The Murr dynasty, a legacy of clientelism

Michel Murr made his clan famous by making Metn the backbone of a clientelist system that propelled him to the top of the political arena. His grandson, who is running to succeed him on May 15, continues to live in the shadow of the patriarch of the family who passed away in 2021 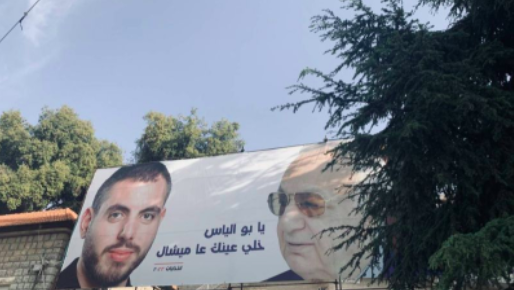 “Many people have asked why I don’t have an electoral program. I wasn’t brought up this way, throwing things up in the air, telling people we’re going to do this or that, only to be held to account in four years.”

These are the words of Michel Murr Jr., spoken with a glassy look, a stony face and an indifferent pout bordering on arrogance — remarks that would have been amusing had the situation not been so serious, just two weeks before the May 15 parliamentary elections.

The heir of the Murr clan and current director of Lebanese daily Al-Joumhouria is one of seven contenders for the two Greek Orthodox seats in the Metn constituency.

But unlike some candidates, who compete with ingenuity to relay the seriousness of their projects, the 27-year-old brushes aside these considerations deemed too prosaic, seemingly proud of this political vacuity, be it at the price of antagonizing a growing number of Lebanese, who believe he embodies nothing but a dying clientelist system.

Two-and-a-half years after the Oct. 17, 2019, popular uprising, the crisis of confidence between the ruling class and the people has never been so acute.

In the public debate, the large Lebanese families are the first to be criticized, as they stand for a dynastic dynamic that has been increasingly difficult to stomach for a population eager for change and modernity.

As representatives of this political inheritance, the Murrs may wish to be worried about this prevailing sense of dégagisme (the desire to tell politicians to clear off). But their descendants appear to be confident.

With Michel, the son of Elias and Carine (daughter of former President Emil Lahoud), the succession seems assured. In Metn, Murr Jr. is running alongside two historical partners, the Tashnag and the Syrian Socialist Nationalist Party.

According to all estimates, he will be able to snatch a seat.

“Even if he loses 50 percent of the votes collected by his grandfather in 2018, his list has a good chance of obtaining two electoral coefficients [and therefore two seats],” an electoral expert told L’Orient-Le Jour on condition of anonymity.

The path seems clear. And yet, the anger that has affected the rest of the country did not spare the people of Metn.

Bteghrine, the Murr family stronghold, looks like a ghost town. As elsewhere, the youth have cleared out. Many of them lost all hope.

“People don’t care anymore, they know that the elections won't change anything,” said Georges, who runs the village dry cleaner.

Those who remain appreciate the benevolent hand of the family, which has just reopened a pharmacy where people can still be treated for a few tens of thousand Lebanese lira.

“They take care of the city and don't leave anyone in the street,” said one resident.

But most people have become disillusioned, like one shopkeeper who ironically said: “If only there was an election every year,” adding that she sees no alternative.

The alternative is not only the presence of a credible political offer.

It’s also about the possibility of doing without the clientelist networks that provide a safety net to hospitalize a parent, send a child to school or pay off a debt. In this respect, the Murrs continue to occupy the space left vacant by the state.

“The extent of clientelism is out of all proportion to what exists elsewhere in the country,” according to a political figure close to March 14 who spoke to L’Orient-Le Jour.

The family does not hide from it. On the contrary, they fully recognize the willingness to serve the people, almost selflessly.

“The state is absent, so it is our duty as Lebanese to stand by the people,” said Michel Murr on television. He, however, did not respond to L’Orient-Le Jour’s requests for comment.

Since the death of his grandfather in January 2021, he has been trying to make a place for himself.

His father Elias, a former minister of interior and defense, who also served later as deputy prime minister, gradually withdrew from local politics after surviving an attack in 2005, and then becoming President of the Interpol Foundation in 2013.

His aunt Mirna, an unsuccessful candidate in the 2002 elections, did not try her luck again. The young Michel was therefore chosen to ensure the continuity of the lineage.

He was officially propelled into the footsteps of his predecessor last January, when his father announced his candidacy.

The tone was set: Portrayed as a simple-minded “scion”, Murr “junior,” as he is trolled and mocked online, is ridiculed for his old-fashioned style.

The Lebanese appear to laugh at this anachronistic candidate. His father, on the other hand, prides himself on offering the nation “what he holds most dear.”

Nevertheless, the electoral machine has been put in motion.

Murr’s face is everywhere to be seen on election posters, campaign clips, television appearances. He has taken the media space by storm, unlike most other candidates of his generation.

Taking advantage of his family heritage and the existing practices to which he owes his success, the political novice also relies on being present on the ground.

Last winter, when fuel prices soared, he distributed diesel to the people of Bteghrine.

“It doesn't matter if you are for or against him, he gives to everyone without exception,” said one of the young candidate’s supporters, who remembers a gift that came at the right time, when temperatures were at their lowest.

Michel Jr. remains inexperienced and was unknown only until recently, which makes some people cautious toward him.

“His generation has nothing to do with his grandfather's,” said one shopkeeper, who is nevertheless certain to give his vote to the “son of the village.”

“Michel Junior” is forced to follow in the footsteps of his grandfather.

He was the one who made the fame of his clan by making Metn the backbone of a clientelist system that propelled him to the top of the national scene, until he became Minister of Housing, Post and Telecommunications (1979-1980), Defense (1990-1992) and then Deputy Prime Minister (1992-2000).

Born in 1932, this son of an entrepreneur made his fortune in Africa before returning to Lebanon. Elected a member of parliament for the first time in 1968, the engineer and businessman built up a loyal clientele through a culture of “favors.”

In his offices of “Aamara” in Amaret Chalhoub, each of the nine floors is dedicated to a ministry. He was called upon for money problems, a dispute to be settled or to fulfill a particular request. “Everyone could go and see him,” said a close friend.

“Loyalty to the leader” is personal and emotional before being political.

He was described by many as an "easy-going", “charming” and “charismatic man who always had the right word.” This allowed him to consolidate his empire over the decades, until he became the “king of clientelism.”

When the time came, he knew how to convert sympathy into votes.

His electoral machine was also well oiled. It worked thanks to the networks of municipalities and mokhtars (local officials) who served as his go-betweens with the Metn people in exchange for favors of all kinds, construction permits, appointments to positions, and so on.

To ensure the continuity of his influence, he installed his daughter Mirna at the head of the Federation of Municipalities of Metn. Since his failure in the 1972 legislative elections — the last polls before the Lebanese Civil War (1975-1990) — electoral calculations had been central to Michel Murr, who keeps a painful memory of his exclusion from Parliament for two decades, until his re-election in 1992.

Critics of the “Murr method” frequently point to its lack of principles.

The man represented “a sort of super-mokhtar devoid of any vision,” according to a political observer who requested anonymity.

His pragmatism, castigated by some as opportunism, was evident when it came to Syrian tutelage in Lebanon, which he accepted while making himself the strong man of the Syrian regime during the 1990s, until the relationship reached a breakup point in 2005.

He had always claimed to be realistic in dealing with the existing balance of power in a bid to ensure the continuity of the Christians’ role in Lebanon, while consolidating his own position.

Thanks to the leading status he acquired at the national level, he managed to sway in, for example, part of the Kataeb rank and file and cadres who later became known as the “Kataeb al-Murr.”

From north to south, from east to west, the country is filled with these kinds of dynastic dynamics based on descent, political heritage and a quasi-feudal relationship to the land.

But very few clans have survived without at some point needing to inject a dose of modernity, for example by structuring themselves into parties.

The Murrs represent one of the few cases where grassroots networks, which slowly turned into an electoral “bloc” over the years, are self-sufficient. So much so that they were never faced with the need to evolve or even question traditional forms of allegiance.

This was the lesson of the 2018 legislative elections, which confirmed the success of the clientelist model: Michel Murr managed to be re-elected easily even though he ran alone, against his historical ally, the Tashnag.

In post-crisis Lebanon, however, the respite could be short-lived.

“The total absence of substance is bound to close the family political life. It won’t end abruptly, but will gradually erode,” said a former MP from Metn.

The year 2022 and those that follow will put this theory to the test.

“Many people have asked why I don’t have an electoral program. I wasn’t brought up this way, throwing things up in the air, telling people we’re going to do this or that, only to be held to account in four years.”These are the words of Michel Murr Jr., spoken with a glassy look, a stony face and an indifferent pout bordering on arrogance — remarks that would have been amusing had the...