Bumper to bumper, boredom to boredom 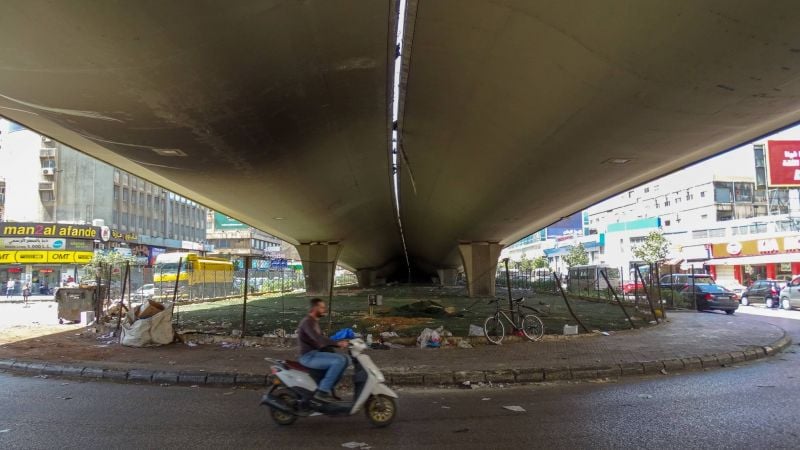 The Daoura roundabout, where I started my walk to the center of Beirut this morning, is dominated by a fast flyover lane, or supposedly fast, as it is most of the time clogged by the hundreds of thousands of vehicles, bumper to bumper, boredom to boredom, madness to madness, that flock daily to the capital from the sprawling and chaotic suburbs of Zalka, Antelias, Dbayeh, the foothills of the Northern Metn, Naqqashe, Rabieh, Bikfaya, or from even further away, from Keserouan, Jounieh, Ajaltoun, Tabarja... Before arriving at their destination, they drop off a son or daughter at his or her university, a child at his or her school or kindergarten, they bring together a husband or wife who will continue on their way to their place of work.

The sun refracts off the windscreens, it reflects off the chrome, it hits the metal interiors in which we argue, in which we evacuate the accumulated tensions. Resentment overflows like the coffee that we did not have time to drink before leaving. This time is wasted waiting in the car, this time is spent not working, not kissing, not drinking that morning coffee with those we love (or no longer love because we no longer love anyone). We complain, we yell, we get angry at each other, because we don't know that our frustration is the result of the failures of the successive governments that have not been able to, or have not known how to, or have not wanted to develop an efficient public transport system to ease traffic in the city and connect it to its northern, southern and eastern peripheries. A study published in 2018 showed a direct link between traffic congestion and domestic violence. From 2011 to 2015, the study found that extreme evening traffic on two major motorways in Los Angeles leads to an approximately 9 percent increase in the incidence of nighttime domestic violence.

Endless daily waits in immobile vehicles, feelings of powerlessness, frustration, annoyance, wasted time, wasted money, wasted fuel, in Mexico City, Cairo, Los Angeles, monster traffic jams are a global plague that contributes to the degradation of the urban environment and to climate change through greenhouse gas emissions, air pollution, noise pollution, visual pollution. They represent unseen economic and financial costs, in terms of hydrocarbons consumed and lost productivity. They have a direct and indirect impact on the health and mental health of citizens. Daily traffic jams are at the heart of the economic, social and public health problems of our contemporary societies.

As road traffic in Los Angeles and its region has returned to pre-pandemic levels, Angelenos now spend an average of more than three days a year stuck, almost at a standstill, in their vehicles during rush hour. To ease traffic, L.A. is betting on measures such as telecommuting, the end of free urban highways (already experimented within Dubai), or the widespread use – still hypothetical – of driverless electric vehicles. Other cities have chosen to build road infrastructures that are as costly as they are inefficient to reduce traffic jams, such as Mexico City and its Autopista Urbana Sur, the spectacular double-decker southern urban highway, which has barely been built and is already saturated. Egypt – pharaonic as it should be – chose to relocate its administrative capital 45 kilometers to the east of the historic megalopolis in order to relieve the congestion in Cairo. Obviously, like the double-decker highway in Mexico City, the construction of this new city will only displace the problem, if not exacerbate it.

In Beirut– a human-sized conurbation wedged between sea and mountain in the midst of an economic and social crisis– the Greater Beirut Public Transport Project was recently abandoned by the government. This project had two main infrastructure systems and a third component related to the governance of the public transport sector. The first system, a fleet of Bus Rapid Transit (BRT) vehicles, aimed to connect the capital with its northern suburbs as far as Tabarja in a first phase, and then to its southern suburbs in a second phase. The second system would have consisted of regular service buses integrated into the urban environment. The governance component aimed to strengthen the institutional and operational capacity of the public agencies involved.

The abandon of this project by the Lebanese government, in early 2022, is a direct attack on the right to mobility of the inhabitants of Greater Beirut. For urban planner Camille Reiss, "the right to mobility is the implementation by the State, the public authorities and civil society of the conditions necessary for equal access to the diversified resources of the territory through modes of transport open to all. The right to mobility is part of the broader "Right to the city", which, according to the French sociologist Henri Lefebvre, is a "right to urban life, to renewed centrality, to places of meeting and exchange, to rhythms of life and schedules that allow full use of these moments and places" (Le droit à la ville (in French), 1968). However, most Beirut residents are deprived, among many other rights, of both the right to mobility and the right to the city.

No alternative public transport project will be as efficient as the Greater Beirut Public Transport Project. Efficient in terms of cost, speed of implementation, radical improvement of the quality of life and transformation of the urban space. In addition to its indisputable efficiency, the co-benefits of such a project are countless: reduction of air pollution, improvement of public health and quality of life in general, economic gains in productivity and financial gains in reduction of the energy bill, opening up and revalorization of peripheral areas, right to mobility, access to employment, increased time allocated to leisure...

Despite the recent considerable reduction of road congestion in Lebanon as a result of the compounded crises that are affecting the country and the exponential increase in fuel prices, it would be a mistake to underestimate the fundamental importance of the Greater Beirut Public Transport Project. It should be taken out of the boxes and implemented as soon as possible.

The Daoura roundabout, where I started my walk to the center of Beirut this morning, is dominated by a fast flyover lane, or supposedly fast, as it is most of the time clogged by the hundreds of thousands of vehicles, bumper to bumper, boredom to boredom, madness to madness, that flock daily to the capital from the sprawling and chaotic suburbs of Zalka, Antelias, Dbayeh, the foothills of the...