Deserted by Hariri, Beirut II is in search of a new political identity

Several Sunni figures have entered the race to take over the leadership from the Future Movement leader. Here’s a closer look at what’s happening. 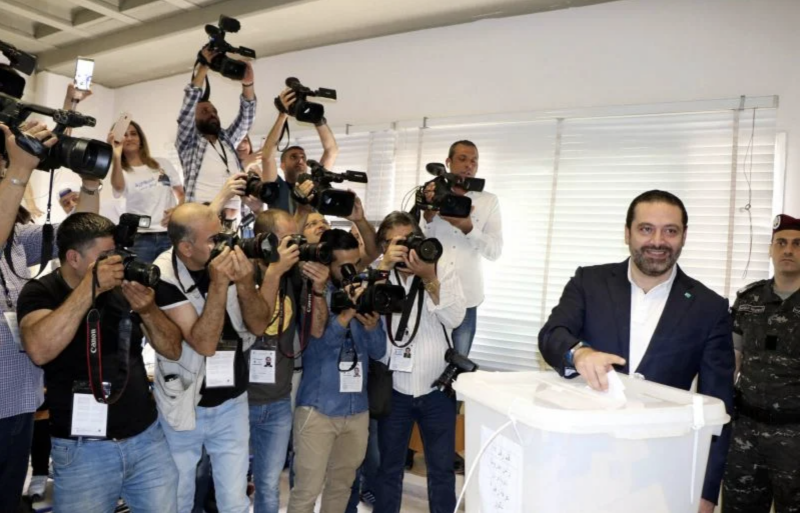 One person is out of the picture, and the whole scene is in shambles. In February, Future Movement leader Saad Hariri announced his decision to bow out of politics and boycott the May 15 legislative elections. While the repercussions of this announcement fell on all Sunni constituencies, it is especially in Beirut II that the Future Movement is leaving an abysmal vacuum.

In the rest of the Sunni areas, however, local leaderships were able to maintain themselves alongside (or against) the Hariris, who have largely dominated the political landscape in the west of the capital since the late Rafik Hariri was first elected from there to Parliament in 1992 and became prime minister that same year.

With the absence of his son from the political elections, MP for this constituency since 2005, Beirut II seems to be looking at uncertain legislative elections, especially since Hariri junior instructed his party members not to enter the fray.

The forces at work

The ten lists competing for the seats in west Beirut are further proof of the fragmentation of the electoral landscape in the capital.

On one hand, the Amal Movement and Hezbollah have joined forces with Gebran Bassil's Free Patriotic Movement, the Lebanese Democratic Party of pro-Syrian Druze leader Talal Arslan and the Syrian National Social Party (SSNP) to form a list representing the March 8 camp.

The pro-Syrian Sunnis of the Ahbash are running alone.

On the other side of the traditional political spectrum, former Prime Minister Fouad Siniora supports a list made up of people close to the Hariri movement and Walid Joumblatt's Progressive Socialist Party.

The moderate Islamists of Jamaa al-Islamiya (the Islamic Group), who failed to elect an MP in 2018, are supporting a list formed by their candidate, former MP Imad al-Hout, and other independent figures.

Former Prime Minister Tammam Salam, who is close to the Hariris and comes from a family of Beiruti notables, obtained about 10,000 votes on the same list. Salam will not toss his hat in the ring this time around.

The absence of these heavyweights may radically change the electoral spectrum in Beirut, leaving other figures and groups to take advantage of the vacuum.

The only remaining candidate of the Future-PSP list, Druze MP for Beirut II Faisal Sayegh (PSP, 1,902 votes in 2018) is running on the list supported by Siniora.

The list of Amal and Hezbollah, with the Ahbash and the FPM, arrived in second place at the end of the 2018 election, with 47,087 votes, securing four seats.

In the May 15 polls, this alliance will have to do without the Ahbash (some 13,000 votes in 2018), the latter having chosen to present its own list.

Another difference is that the list of Hezbollah and its allies includes a Druze candidate, the vice president of Lebanese Democratic Party, Nassib Jawhari, and a Greek Orthodox, Ramzi Maalouf of the Syrian Social Nationalist Party.

The big question on everyone’s mind: will the 60,000 or so Hariri voters from last elections turn away from the upcoming ones?

A massive abstention of the Sunni electorate could lead to a considerable drop in the electoral threshold, and therefore in the coefficient, which could play into the hands of Amal and Hezbollah.

The two Shiite parties appear to be well on their way to keeping the two Shiite seats in the hands of Amin Sharri (Hezbollah, 22,961 votes in 2018) and Mohammed Khawajah (Amal, 7,834 votes), and could also reappoint Edgard Traboulsi (FPM 1,919 votes) to the Protestant seat, although the FPM has no real presence in Beirut II.

A drop in the electoral coefficient could even allow the pro-Hezbollah list to elect new MPs: the Greek Orthodox seat could therefore go to SSNP’s Maalouf, unless an independent figure, such as former Beirut Bar Association president Melhem Khalaf or Zeina Majdalani (1,218 votes in 2018), can snatch it.

The Ahbash could also take advantage of the decline in the electoral coefficient, or even win the votes of Hariri voters, which would allow them to take another seat, in addition to that of Adnan Traboulsi (13,018 votes in 2018).

In a bid to block the March 8 camp's advancement, Siniora was keen on sponsoring the “Beirut Confronts” list in the constituency.

The former premier, however, is not running himself, which reduces the chances of the list, especially since it does not include any real Haririst heavyweights, but could benefit from the return of Saudi ambassador Walid Bukhari to Beirut, who has sent him several encouraging signs.

Siniora is not alone in claiming the legacy of traditional Sunni leadership.

L’Orient-Le Jour learned from corroborating sources that the list formed by these two Sunni figures enjoys the implicit support of Saad Hariri, especially since several Haririst figures were present at its official announcement.

Hariri’s objective would be to prevent Siniora from building an alternative Sunni leadership to his own. Speaking to L’Orient-Le Jour, both Hout and Badr denied any cooperation with the Future Movement leader.

The two men had already formed a list in the previous election, which obtained only 7,475 votes, which was below the electoral threshold. However, a potential drop in the threshold and the addition of some extra pro-Hariri votes to this list could allow it to secure at least one seat in Parliament.

“Undoubtedly, there is a sense of defeatism among Sunnis in Beirut. But this does not mean that we have given up and that everyone will stay at home,” Hout told L’Orient-Le Jour, adding that he is aiming to win two seats for his list.

But the battle for leadership in Sunni Beirut is not limited to these figures.

There is also Makhzoumi, the business tycoon who recently took on a radical position vis-à-vis Hezbollah.

The Beirut parliamentarian can count on powerful clientelist networks and should have no problem being re-elected to his seat (he received 11,346 preferential votes in 2018).

However, securing a seat for another candidate running on his list appears to be more challenging.

Beirut II is among the constituencies where groups claiming to represent the Oct. 17, 2019 uprising are most likely to make a breakthrough, mainly because of Hariri’s withdrawal, which left a vacuum that could play to their advantage.

However, as in most districts, these opposition forces appear more scattered than ever as they head to the electoral battlefield on May 15, which complicates their task.

“Beirut the Change” is the only comprehensive list bringing together the largest number of opposition groups, including Ibrahim Mneimneh (Beirut Touqawem, 1,676 votes in 2018), Iman Tabbara (National Bloc), Wadah Sadek (Khat Ahmar), and Khalaf, among others.

The list was supposed to include candidates from the Beirut Madinati as well, but a last-minute split in the lists prompted that group to form its own.

“They wanted a larger share, that's all,” said a source close to “Beirut the Change.”

Beirut Madinati, for its part, said in a statement that it decided to fight the battle alone in the face of “the lack of clarity on the selection of candidates.”

There is a third list, “Capable,” which is supported by MMFD, founded and led by former Minister Charbel Nahas, which fielded candidates across the country’s constituencies to compete in elections against traditional political parties.

Bahaa Hariri’s Sawa Li Lubnan movement, presenting itself as the standard-bearer of the 2019 uprising, is supporting an independent list made up of figures who are little known to the general public.

One person is out of the picture, and the whole scene is in shambles. In February, Future Movement leader Saad Hariri announced his decision to bow out of politics and boycott the May 15 legislative elections. While the repercussions of this announcement fell on all Sunni constituencies, it is especially in Beirut II that the Future Movement is leaving an abysmal vacuum.In the rest of the Sunni...