L’Orient Today turned to the data available from the local voting stations in an attempt to find out more about the voters who put 13 opposition MPs close to the Oct. 17 protest movement in office. 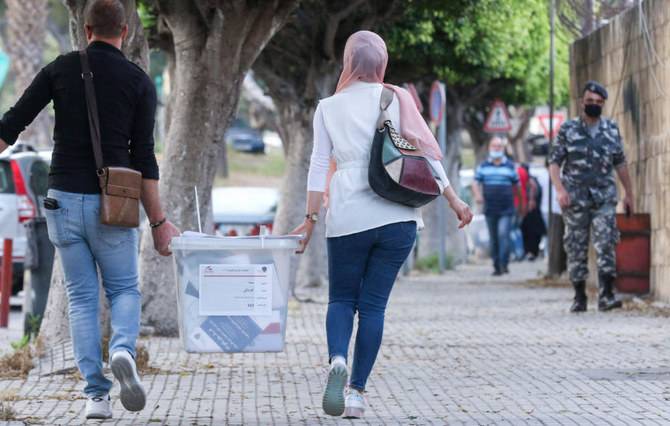 Lebanese civil servants assigned to run polling stations receive sealed ballot boxes at the governmental serail in Saida on May 14, 2022 on the eve of the parliamentary elections. (AFP)

BEIRUT — With the dust having settled from May's parliamentary elections, the newly elected opposition MPs are starting to form a bloc, although not always a cohesive one, and are staking out their positions on various issues important to their constituents.

But who, exactly, are the constituents who put them in office? L’Orient Today turned to the data available from the local voting stations in an attempt to find out.

Lebanon does not have exit polls that allow observers to chart the correlation between voting behavior and factors such as age, income, or years of education. But because most of the country’s domestic ballot boxes are divided by sect and gender, it is possible to analyze domestic voting behavior along those two axes.

Just as the country’s electoral law is sectarian, so too, are the ballot boxes themselves. Of the approximately 6,800 domestic ballot boxes in this year’s elections, roughly 4,500 of them were reserved exclusively for voters of one sect and gender.

An Interior Ministry spokesperson was not able to provide an official explanation as to why some ballot boxes are exclusive to a single sect and gender and others are mixed, but a glance at the list suggests that, in practice, larger sects in an area are given their own boxes, and minorities in the area are grouped together into shared boxes. In the diaspora, given the lower number of voters, the boxes are assigned voters are at a much higher level of generality, such as a district or even the entire country.

Because of that, the diaspora cannot easily be analyzed by demographic characteristics, but it is clear that, in general, expat voters were more favorable to opposition lists than were resident Lebanese.

L’Orient Today generated a simple random sample of 450 ballot boxes out of the 4,482 that have an exclusive sect and gender assignment and was able to locate results for 443 of those boxes. Those 443 boxes span every district and include 124,046 votes.

We then tallied the votes for those lists that were seen as carrying the mantle of the Oct. 17 protest movement, following the list categorization used by Sawti, an election initiative backed by the NGO Impact Lebanon. Sawti identified 34 lists as “alternative” — which according to their website meant they met eight criteria, including being “non-sectarian and secular,” having “no links to the current political establishment” and not running with a party that “participate[d] in the civil war.”

A comparison of votes for these new opposition lists and traditional lists across by voters of different sects and genders, gives a complex picture, illustrating the extent to which Lebanese electoral politics is local and each district has its own governing dynamics.

Across the entire nationwide sample, 13 percent of women voted for opposition lists compared to 11 percent of men.

The sectarian breakdown of votes showed much wider variation across districts.

Across the North I, II, and III districts, Greek Orthodox voters seemed more inclined to vote for the new opposition than Maronites. But in Beirut I and Mount Lebanon II, the opposite was true, suggesting the importance of local dynamics.

Take Druze voters for example. Votes for new opposition lists among Druze voters in our sample ranged from 87 percent in South III to 15 percent in Bekaa II. (The sample includes 30 boxes assigned to Druze voters, which are spread across five districts.)

In South III, the field was divided between Hezbollah and Amal’s Hope and Loyalty list and a unified list from opposition groups. Banker and former minister Marwan Kheireddine was the Hope and Loyalty candidate for the district’s one Druze seat, and is close to the Lebanese Democratic Party of Talal Arslan, but he was defeated by Firas Hamdan from the opposition camp — a well-known figure from the Oct. 17, 2019 protest movement who was shot and wounded by Parliament police during a protest following the Beirut port explosion. The powerful, predominantly-Druze Progressive Socialist Party did not put forward a candidate in the district, potentially lessening the barrier for the opposition groups.

“It was a significant mistake on the part of the Lebanese establishment to run with Marwan Kheireddine,” said Karim Bitar, director of the Political Science Institute at Saint Joseph University of Beirut (USJ) and a co-founder of Kulluna Irada, a civic organization for political reform. “It was perceived as an agreement between Jumblatt, Berri, Arslan, with, of course, Hezbollah’s agreement. And the fact that there was such a staunch opposition in characters between Kheireddine and Firas Hamdan, who was one of the victims of police brutality during the revolution, turned this campaign into a symbolically important battle.”

Lebanese University professor and political analyst Talal Atrissi said while mainstream Shia audiences may criticize the practices of Hezbollah in the state, and various policy choices it makes, they don’t tolerate insults directed at Hezbollah leader Hassan Nasrallah. Attempts by some opponents to make the election a referendum on Hezbollah’s weapons helped Hezbollah among its base, many of whom, he said, “don’t accept for the weapons of the resistance to be the price for unknown deals in Lebanon.”

“The party succeeded in transforming these two points into the title of the electoral battle. And what follows, the speeches of the Sayyed [Nasrallah] focused on these two issues. Because of this, in the elections, the party didn’t need to make a great effort to encourage people to vote, or to tell them not to vote for” rivals.

The European Union Election Observation Mission, for its part, found “documented cases of intimidation by the Hezbollah-Amal Movement with regard to their electoral opponents.” In Bekaa III (Baalbek-Hermel), the Mission found “the extent of the intimidation might have affected the integrity of the voting process.”

Incidents were not limited to areas where Hezbollah and Amal hold sway, however, with cases also appearing in Beirut II, Bekaa II, and Mount Lebanon IV, according to the Mission. Of those districts the Mission said “violations remained localized and cannot be considered as having had an impact on the election results.”

Among Shia voters, the highest rates of choosing opposition lists came in Mount Lebanon IV and III, where Shias voted for opposition lists at rates six times higher compared to Shias in Bekaa I, the district with the lowest rate.

Meanwhile, amidst a vacuum left by the decision of former prime minister and Future Movement leader Saad Hariri not to enter the elections, Sunni voters went for opposition lists in fairly high numbers across the country.

“Sunni voters voted for the opposition in large numbers. Probably because they felt sort of liberated after Saad Hariri’s decision not to run,” said Bitar. ''In the Sunni political landscape, this time it was an entirely new ball game and indeed it benefited the opposition, particularly because the lists in Beirut II and, to a lesser extent, in Tripoli appeared credible. The opposition lists appeared as being made of new, respected figures and could not be accused of being a front for Hezbollah. So this is probably the reason why they scored relatively well in Beirut and even obtained a seat in Tripoli.”

Over a quarter of Sunnis in the heavily contested Beirut II constituency, where several would-be replacements for Saad Hariri tried to test their mettle, voted for opposition lists.

You can download a copy of the complete sample at this link. Additional reporting by Kim Makhlouf.

BEIRUT — With the dust having settled from May's parliamentary elections, the newly elected opposition MPs are starting to form a bloc, although not always a cohesive one, and are staking out their positions on various issues important to their constituents. But who, exactly, are the constituents who put them in office? L’Orient Today turned to the data available from the local voting...