#5 The independents who want to clean up their image

Having run on the presidential bloc lists in 2018, some candidates are presenting themselves today as the mouthpieces of the protest movement 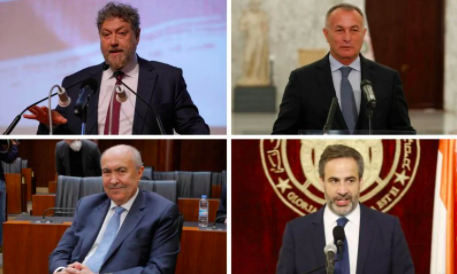 Are they opportunists, or did they have a real change of heart?

Several independent politicians, most of whom were key players in the victory of the Free Patriotic Movement in the 2018 elections, with some of them even running on Aounist lists, which were seen as the strongest politically at the time, are now positioning themselves as spokespeople for the Oct. 17, 2019, protest movement.

After the thawra (revolution), however, most of them ended up slamming the door on the FPM-backed “Strong Lebanon” parliamentary bloc.

With the elections less than two months away, these candidates have become key figures. They often hail from families of local notables with significant political influence, or have made it big in the business world. Ideally, they check both boxes.

Political parties are competing to include these “barons” on their electoral lists because of their significant popular and financial support.

The opposition lists were torn in some constituencies on how to deal with them. L'Orient-Le Jour took stock of the main independent figures on the opposition side.

Among these figures is the industrialist and former MP of Kesrouan Neemat Frem, who ran in 2018 on the FPM-backed “Strong Lebanon” list, supported in the Mount Lebanon I constituency (grouping the districts of Jbeil and Kesrouan).

With 10,717 preferential votes, he was the candidate with the most votes on his list, and in Kesrouan in general. However, his score was still slightly below the electoral threshold, set at 12.5 percent of the total votes,or 14,452 votes in 2018.

Assuming he can repeat this result in 2022 without the Aounists’ support, Frem seems well positioned for the next elections. He resigned from Parliament a few days after the 2020 Beirut port explosion.

When asked why he joined forces with the Aounist parliamentary bloc back in 2018, Frem said he hoped to be a catalyst for change.

“I joined the ‘Strong Lebanon’ group hoping that my position within an influential bloc would allow me to change things. Following our disagreements in public policy, I preferred to withdraw,” he said.

Frem broke away from FPM leader Gebran Bassil’s group in October 2019, in the aftermath of the Oct. 17 popular uprising.

Will voters forgive him for his past political stance? Frem replies that the electorate will have the final word on this, adding that “his daily interaction with the citizens of Kesrouan is positive.”

During the thawra, and before his resignation from the Aounist group, he was booed by demonstrators in Zouk. “I am one of you!” he said at the time.

“You must resign,” the demonstrators retorted.

Frem resigned and is running on the list “The Cry of a Nation” alongside Kataeb, the National Bloc and politicians claiming to have emerged from the protest movement.

In the same constituency, there is another candidate who is also a former member of the Aounist parliamentary group. He was not the last one to break away from the Aounists.

The son-in-law of President Michel Aoun, Chamel Roukoz was elected in Kesrouan with 7,300 votes on the “Strong Lebanon” list, securing almost half the electoral threshold in Mount Lebanon I (Jbeil-Kesrouan).

He left Bassil's group only one year after the elections.

This was a decision taken against the backdrop of political disagreements on issues regarding the social demands of retired soldiers — a cause that Roukoz defends ardently, but especially because of his rivalry with Bassil, the president’s other son-in-law.

Aoun is said to have always favored the FPM leader politically, especially when it comes to succession to the presidency.

Roukoz is basing his electoral campaign on the transition to a secular state, the fight against corruption and an agreement on a national defense strategy regarding Hezbollah’s weapons.

While he seemed to court the protest movements at one point, the former military officer preferred to ally himself with independent MP Farid Haykal al-Khazen within the list “The Heart of Independent Lebanon.”

Former MP for Zgharta, Michel Moawad is yet another defector from the “Strong Lebanon” parliamentary bloc.

This tally allowed him to come in second place on his list, but also in his constituency of Zgharta (behind Tony Frangieh who garnered 11,407 votes).

An alliance with Moawad was essential for the FPM, as he was the most serious opponent of Frangieh in Zgharta. He also managed to garner the most Lebanese expat votes.

For the May 15 elections, however, Moawad is running without the Aounists.

“I was convinced that the presidential agreement between the main political formations around Michel Aoun could be an opportunity for reforms from within. It was certainly a big mistake,” the son of the assassinated former president Rene Moawad told L'Orient-Le Jour.

He said his alliance with the FPM was also for “electoral” reasons, not just based on political understanding.

“Beyond the national political aspect, the alliance with the Aounists also had a dimension related to the balance of forces in North III,” Moawad said.

He ended up resigning from Parliament in the wake of the Beirut port explosion, positioning himself as an opponent of the presidential camp.

For May’s elections, Moawad launched a campaign focused on fighting “the alliance between the militia and the mafia,” meaning Hezbollah and corruption.

“Fighting the militia while turning a blind eye to the mafia, as has been the case in the March 14 camp, will lead nowhere. Fighting the mafia without worrying about the militia is at best an illusion,” he said.

“Change can only be made on the basis of an inseparable formula: sovereignty and neutrality; reforming the system; structural reforms of the economic and financial model on the basis of a free, productive and fairer economy,”the Independence Party leader added.

Unlike Frem, Moawad will not be on a list with the main parties of the Oct. 17 forces grouped around the alliance Chamalouna in North III.

“We respect Michel Moawad and have nothing against him, but we try to do politics differently, with normal people, not with notables and political heirs,” a source from Chamalouna told L’Orient-Le Jour on condition of anonymity, for professional reasons.

“If they really want change, they should step aside and make way for others,” the source added.

Carmen Geha, a political scientist and professor at the American University of Beirut, does not seem to concur with this argument.

“In general, after an event like the thawra, the best outcome for protesters is to convert members of the ruling elite to their cause. Wanting to remove all the MPs and replace them with a new parliament is not a realistic goal,” she said.

She acknowledged, however, that the lack of a real accountability mechanism has caused “people to lose confidence.”

Moawad is now allied with the Kataeb, Majd Harb, son of former minister Boutros Harb, “as well as with independent figures from movements close to the thawra,” concluded Geha. He is running on his list named “The North of Confrontation."

“I have always been an independent member of Parliament and a strong critic of the ruling political class. However, I had good relations with the MPs who later resigned from their groups such as Neemat Frem, Michel Moawad, Samy Gemayel and others,” Makhzoumi said.

The Beirut MP has been tough on Hezbollah since the thawra and claims to have been in discussion with all those who share his reformist and sovereignist vision.

But, for the political forces of the protest movements, an alliance with Makhzoumi was out of the question.

“Fouad Makhzoumi's political program is much too traditional, whether on the issue of changing the political system, the economic model or social issues,” said an anonymous source from Beirut Touqawem, a progressive and reformist group formed in Beirut, which makes the fight against Hezbollah and the reform of the political system its spearhead.

Makhzoumi, an elected official in Beirut, did not resign in the wake of the Beirut port explosion, a decision frowned upon by the protest movement groups.

“In any country in the world, all political power would have collapsed,” Geha said.

Are they opportunists, or did they have a real change of heart?Several independent politicians, most of whom were key players in the victory of the Free Patriotic Movement in the 2018 elections, with some of them even running on Aounist lists, which were seen as the strongest politically at the time, are now positioning themselves as spokespeople for the Oct. 17, 2019, protest movement.After the...