Electoral lists in, BDL denies bankruptcy comments, students protest dollarization: Everything you need to know to start your Tuesday

Here’s what happened yesterday and what to expect today, Tuesday, April 5 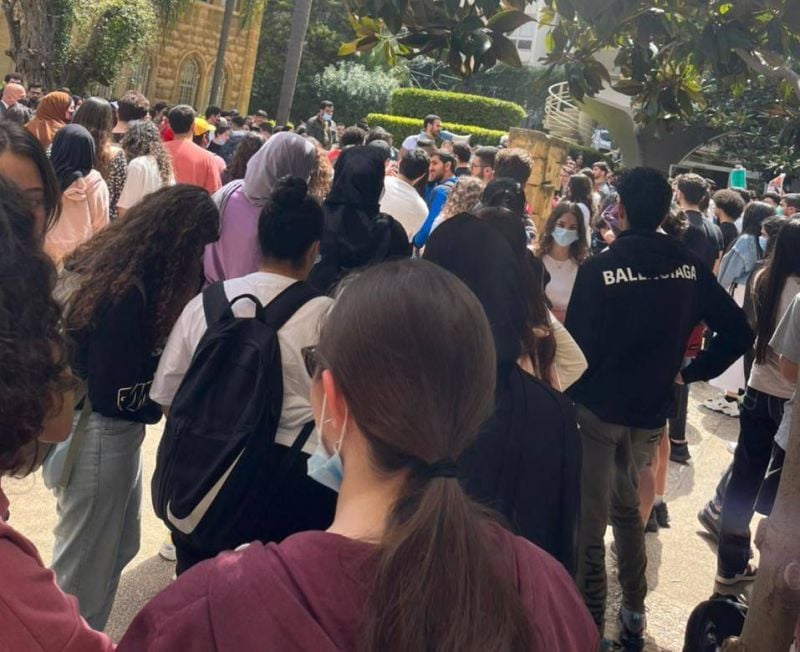 Meanwhile, two new strikes were announced, one by workers at the Saint Georges Hospital in Ajaltoun, and one by a spokesperson for waste management contractor City Blu. Employees of Saint Georges Hospital complained that their salaries have not been adjusted to reflect the current economic circumstances, and that their living conditions have been worsening due to soaring prices of fuel and consumer goods. Another qualm the employees have with the hospital is that they were promised that a new board of directors would be installed in April to improve the situation, but this has yet to happen. The hospital was not available to comment when contacted by L’Orient Today. A spokesperson for City Blu told L’Orient Today its workers have been on strike since the beginning of April, blaming an inability to pay salaries. As a result, trash has been piling up on the streets of Beirut and surrounding areas. The spokesperson said that due to a withdrawal limit placed on banks by Banque du Liban, payment of salaries would incur a 33 percent extra charge, amounting to LL1.65 billion, which the company cannot afford. In a tweet on Monday, Prime Minister Najib Mikati said he called BDL and requested increased liquidity for Ramco and City Blu, the two companies that handle waste collection in Beirut.

Lebanon’s Deputy Prime Minister Saade Chami described the country and its central bank as “bankrupt” on Sunday. Chami’s comments were made during a televised interview with local TV station Al Jadeed. BDL was quick to deny these claims in a statement Monday saying that it continues to play its role as stipulated by Article 70 of the Code of Money and Credit as they relate to safeguarding the national currency and economic stability. Chami had previously described the current economic and financial conditions in Lebanon as dire, and the access he is afforded to financial reports due to his role in negotiations with the IMF lends considerable credence to comments he makes about financial matters. In his latest address to the Economic Council, the deputy prime minister marked up the financial sector losses from $69 billion to $73 billion, while arguing that the state cannot bear the bulk of the losses for debt sustainability reasons. However, in an appearance with OTV, Chami seemed to backtrack on earlier statements saying his words were taken out of context. Lebanon defaulted on its foreign debt in March 2020.

Dozens protested near the Beirut port to mark 20 months since the Aug. 4, 2020, explosion. The demonstration was organized by the families of the victims, who marched from Beirut’s Gemmayzeh neighborhood to the port to demand justice. During the march, family members held up portraits of their loved ones who died in the blast. The tragedy was caused by the explosion of hundreds of tons of ammonium nitrate stored in a warehouse for years without proper safety or security measures. Many have blamed the corrupt political class for the presence of the combustible chemicals at the port. An investigation in the blast, led by Judge Tarek Bitar, has been stalled by numerous requests lodged by political figures and officials implicated in the probe to remove him from the case.

Hundreds of Lebanese American University students held a protest yesterday on the school’s Beirut campus. The students were protesting the dollarization of tuition fees. Students who spoke to L’Orient Today said they would boycott classes until their demands were heard. The changes in tuition collection were announced last week by the university’s president, Michel Elias Mawad, in an email to students and staff, and the change is set to go into effect in the Fall 2022 term. In his email, Mawad noted that the Lebanese economy’s move towards dollarization and the continuing devaluation of the country’s currency has forced LAU “to collect revenues in the same currency.” The email also noted that the university was working on opening campuses in Iraq and other countries “for the purpose of getting dollar revenues for the university to keep standing.” A similar effort is being made by the American University of Beirut, which is set to commence construction on its first overseas campus in Cyprus by July at the latest.

In case you missed it, here’s our must-read story from yesterday: “‘I’ll install them myself ’: NGO steps in to turn Beirut traffic lights back on”

Want to get the Morning Brief by email? Click here to sign up. Yesterday at midnight was the deadline to register electoral lists with the Interior Ministry. In total 103 lists were formed. Interior Minister Bassam Mawlawi said six lists were formed in Beirut I (East Beirut), 10 in Beirut II (West Beirut), eight in Bekaa I (Zahle), six in Bekaa II (West Bekaa-Rachaya), six in Bekaa III...