Aoun to keep national dialogue invite open, ‘darkness’ warning, antigen tests at Beirut airport: Everything you need to know to start your Friday

Here’s what happened yesterday and what to expect today, Friday, Jan. 14, and this weekend 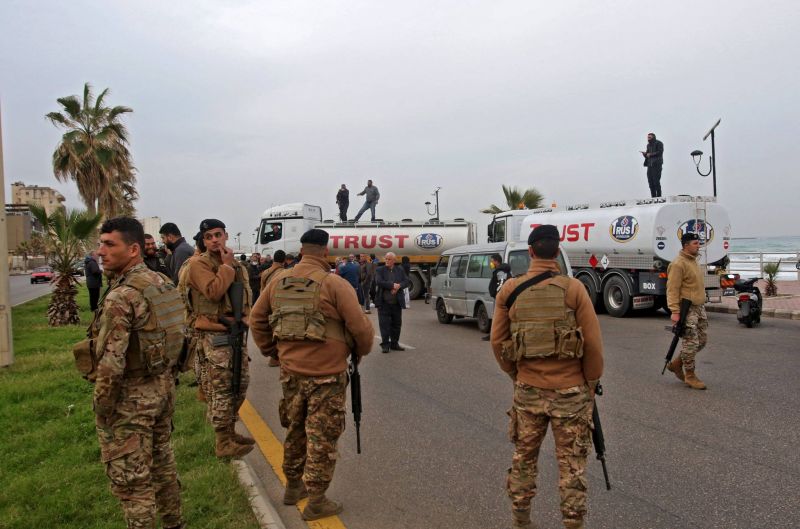 Lebanese security forces stand guard as protesters block the main seaside road in the southern Lebanese city of Saida during a general strike by public transport and workers unions over the country's economic crisis, on Jan. 13, 2022. (Credit: AFP/Mahmoud Zayyat)

President Michel Aoun said yesterday that his appeal for a national discussion with political leaders will remain open, and criticized those who refuse to participate in it. Following Aoun's discussions with various political factions, only Hezbollah and a few Shiite-aligned parties came out in support of the dialogue. “The positions of some ranged between refusing to consult and rejecting dialogue,” the statement issued by the president’s office read yesterday. Those who reject participation, should “bear responsibility for the consequences of the continued total obstruction of authorities,” the president’s statement added. Aoun’s appeal for dialogue, issued on Dec. 27, was an attempt to resolve a number of concerns, including the national defense strategy, the economic recovery plan and administrative and financial decentralization. The president's request was rejected by Future Movement leader Saad Hariri, Progressive Socialist Party leader Walid Joumblatt, Marada Movement leader Sleiman Frangieh and Lebanese Forces chief Samir Geagea.

The Energy Ministry announced new fuel prices yesterday for the second time this week, pushing private generator owners to warn that the country is heading towards “darkness within a day or two.” The new prices move the cost for 20 liters of 95-octane and 98-octane gasoline to LL377,800 and LL390,600, respectively. The price of diesel rose to LL410,000, and the cost of a tank of household cooking gas hit LL359,500. Shortly after the new price list was announced, private generator owners said they would be unable to afford the continually growing cost of diesel to keep the electricity running during the long hours of state power outage. Since last summer, generator owners have rationed energy for hours each day in order to save on fuel, rest their machines and lower rates for their subscribers.

Roads in some districts of Lebanon were closed yesterday as part of a countrywide strike called by the land transportation unions and the General Confederation of Lebanese Workers to protest poor living conditions. According to Bassam Tleis, the chairman of the land transport unions, 98 percent of the unions' drivers participated in yesterday’s “day of rage” strike. During a news conference, he stated that a meeting will be conducted Monday to “reveal the union’s decisions,” without further clarifying what these pertain to. The strike, according to Tleis, was against the government for failing to keep its pledges to promote the road transport industry. According to L'Orient Today’s reporters across Lebanon, the number of individuals who took part in the strike yesterday was relatively modest; however, in the early morning numerous highways were obstructed.

According to Lebanon’s foreign minister, the US will exempt Lebanon from sanctions on a contract to import natural gas from Egypt via Syria. Abdallah Bou Habib announced yesterday that the US has informed the Egyptians that it is going to grant Lebanon an exemption from sanctions in order to facilitate the deal, the Lebanese Presidency's Twitter account reported. After a visit to Egypt by Prime Minister Najib Mikati, a representative for Mikati informed L'Orient Today earlier this week that Egyptian officials had verbally agreed to sign the contract that would transfer gas from Egypt to Lebanon. To date, the US has not released any statement commenting on the matter. The long-awaited Egyptian gas contract aims to improve Lebanon's electrical supply and is part of a US-led strategy unveiled by US Ambassador to Lebanon Dorothy Shea last summer.

The health ministry announced yesterday that vaccinated travelers can now submit an antigen test, instead of a PCR, upon arrival in Beirut to show they are not infected with the COVID-19 virus. Health Minister Firass Abiad said yesterday that tourists arriving at the Beirut International Airport who have received a COVID-19 vaccine can now display negative results from an antigen test performed 24 hours before departure. Unvaccinated travelers must still have a negative PCR test 48 hours before their flight. However, the minister did not define how many doses of the COVID-19 vaccination passengers must have received before they are excluded from the PCR test requirement.

In case you missed it, yesterday’s must-read from L’Orient Today: “Hezbollah goes on the offensive: ‘We will no longer accept being called terrorists’”

Want to get the Morning Brief by email? Click here to sign up.President Michel Aoun said yesterday that his appeal for a national discussion with political leaders will remain open, and criticized those who refuse to participate in it. Following Aoun's discussions with various political factions, only Hezbollah and a few Shiite-aligned parties came out in support of the dialogue. “The...