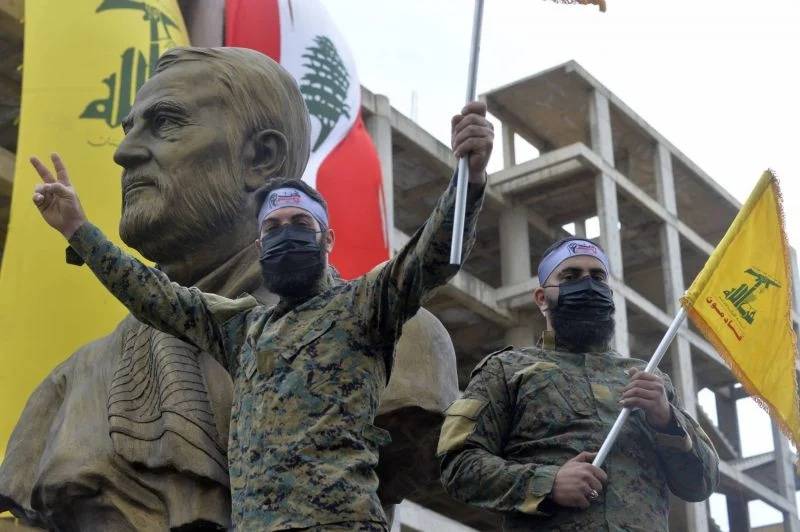 Hezbollah supporters during the ceremony held on Jan. 4 in the southern suburbs on the occasion of the second commemoration of the assassination in Iraq of Iranian Gen. Kassem Soleimani. (Credit: Houssam Chbaro)

Hezbollah has done it again. A few weeks ago, the Shiite party organized a conference for Bahrain’s main opposition group, al-Wifaq.

But things did not stop there.

Yesterday, in the heart of Beirut’s southern suburb, the party sponsored a conference in support of opposition to Saudi Arabia, which was held on the day marking the execution of Imam Nimr al-Nimr, a prominent opposition Saudi Shiite cleric.

During the highly symbolic event, Hezbollah sent yet another strong message to Riyadh, accusing it of orchestrating a defamation campaign targeting the party, as well as to the Lebanese state that has been unsuccessfully working to re-establish diplomatic relations with Saudi Arabia.

Bringing together some 50 Saudi opponents — including Sunnis, Shiites and Ismailis — according to a party source, the conference seems to be the starting point of a real movement in the face of the Saudi kingdom, under the slogan of “uniting the fight against the enemies,” as noted by the ceremony’s presenter.

This is a particularly sensitive point for Riyadh, which has always sought to silence all forms of opposition.

What’s more, the conference’s theme was by no means an innocuous choice: “The Gathering of the Opposition in the Arabian Peninsula” uses the historical term deployed when referring to the geographic area prior to the founding of the Kingdom of Saudi Arabia in 1932.

The pro-Iranian party, which has been criticizing Saudi Arabia for several months, is now, more than ever, wearing its animosity toward the kingdom on its sleeve.

“This event is undoubtedly a reaction to the Saudi regime that has exhausted all kinds of accusations against Hezbollah,” Nabulsi said.

Since Saudi King Salman bin Abdulaziz referred in December to Hezbollah as a “terrorist” group, the Shiite party has moved to the defensive.

The party’s secretary-general, Hassan Nasrallah, was swift to snap at the Saudi kingdom, which he accused of “holding the Lebanese residing in the Gulf hostage.”

According to party circles, the Saudi opponent conference had been decided for years but postponed on several occasions at Nasrallah’s request.

The timing now, however, could not have been more “perfect” amid the tension that has recently flared between the two rival sides.

Hachem Safieddine, the party’s executive council chairman and one of the keynote speakers at the event, was the one who set the tone.

“Saudi Arabia’s policy of intimidation in the Arab and Islamic world must come to an end […] We are perfectly capable of building a noble nation worthy of this name and […] without any foreign subordination. This will be the big headline of the coming period,” he said.

Seen as the most likely candidate to succeed Nasrallah, Safieddine also called on Riyadh to “stop harming Lebanon,” accusing it of wanting to “pit the Lebanese against each other.”

“Saudi Arabia is called on not to intervene by imposing its views on Lebanon,” he said, accusing the kingdom of “obstructing, punishing and threatening.”

“This is flagrant interference in the country,” Safieddine added, in a jab at the recent remarks made by Saudi Ambassador to Lebanon Walid Bukhari, who said [on Jan. 6] that Hezbollah represents a “threat to the regional security,” calling on the Lebanese authorities to end the party’s “hegemony over all aspects of the state.”

“If you do not stop, we will take another position,” Safieddine threatened, insisting that his party will no longer accept being called “terrorist and venturer.”

It did not take Bukhari long to respond, accusing Hezbollah in a tweet on Jan. 12 of “ignoring the pains and hopes of the brotherly Lebanese people, and to do so is to ignore the plain truth.” He also denounced the party, which he said considers itself “above the Lebanese state.”

Bukhari added in another tweet that the “sedition and division” discourse cannot have any “legitimacy.”

The conference served as another symbolic move as it was held on the day marking Nimr execution [in 2016], which prompted widespread denunciation by many governments and human rights movements.

During the conference, the speakers, Lebanese figures and Saudi opponents, touched several times on the “heinous crime” and denounced the kingdom’s “despotism” and “repressive practices.”

Notably, Hezbollah went on to hold the event, despite warnings by Interior Minister Bassam Mawlawi the day before, saying that the conference and the speeches must be “in accordance with the Lebanese constitution, which prohibits any attack on relations with brotherly countries.”

“We will apply the law,” the interior minister said firmly, adding that any attack on the kingdom is a red line not to be crossed by the speakers.

In December 2021, Mawlawi ordered the expulsion of the Bahraini opposition group conference’s organizers from Lebanon.

The speakers at the conference completely ignored the warnings of the minister , who was also not spared their scathing criticism.

“This attitude, Mr. minister, will not allow you to run for the premiership in the future,” sheikh Ghazi Honeini, a Shiite dignitary, said, in a jab at Mawlawi.

“The existence of the resistance is decisive when it comes to the appointment of prime ministers in Lebanon and the formation of government,” he added bluntly.

Prime Minister Najib Mikati also received his share of rebuke. The premier has been the target of Hezbollah criticism since he defended Saudi Arabia against Nasrallah’s remarks.

The latter accused Riyadh, among other things, of having contributed to the emergence of the Islamic State (ISIS) in the Middle East.

“What Hassan Nasrallah said about Saudi Arabia does not reflect the position of the Lebanese government or that of the majority of the Lebanese people. It is not in Lebanon’s interest to undermine other Arab countries, notably those in the Gulf,” Mikati said in response to Nasrallah’s statements.

Although the prime minister has been trying to maintain a minimum of good relations with Hezbollah, making sure not to convene his cabinet against its will and that of its ally, the Amal Movement, the pro-Iranian party remains angry with the premier for dissociating himself from a component of his government.

“He did not react when we were called terrorists. His silence encouraged Saudi Arabia to continue its campaign. He was supposed to defend us,” Nabulsi said.

“From now on, we are in an open conflict. Hezbollah is leading an offensive fight against opposition at home and abroad,” Kassem Kassir, an analyst close to the Shiite party, said.

Hezbollah has done it again. A few weeks ago, the Shiite party organized a conference for Bahrain’s main opposition group, al-Wifaq. But things did not stop there.Yesterday, in the heart of Beirut’s southern suburb, the party sponsored a conference in support of opposition to Saudi Arabia, which was held on the day marking the execution of Imam Nimr al-Nimr, a prominent opposition Saudi...