Travel ban for Salameh, fuel price hike, bread shortages: Everything you need to know to start your Wednesday

Here’s what happened yesterday and what to expect today, Wednesday, Jan. 12 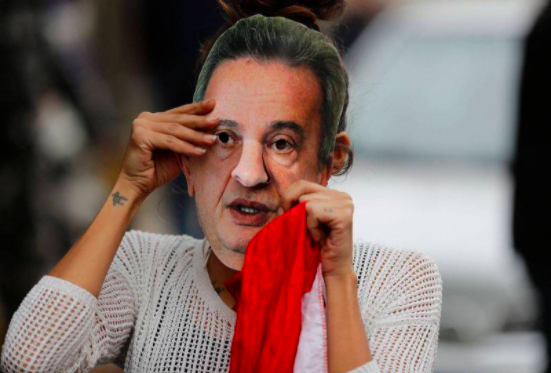 A protester holds a mask bearing the effigy of BDL Gov. Riad Salameh during a sit-in in front of the headquarters of the central bank in Beirut in November 2019. (Credit: Joseph Eid/AFP)

Lebanon’s central bank governor was slapped with a travel ban. Mount Lebanon Public Prosecutor Judge Ghada Aoun yesterday issued a travel ban against Banque du Liban chief Riad Salameh, a judicial source confirmed to L'Orient Today. Aoun’s ban comes in response to a complaint submitted by the “People Want to Reform the System” group, represented by lawyers Haitham Ezzo and Pierre Gemayel, and prohibits Salameh from leaving the country via sea, land or air. Lebanon's longtime central bank governor is under growing criticism for his involvement in the country’s protracted financial crisis. In November, Lichtenstein became the latest jurisdiction to launch an inquiry into Salameh's suspicious financial practices, joining France, Luxembourg and Switzerland. Salameh, nonetheless remains in his post in Lebanon, yesterday announcing an expansion to Circular 161 under which BDL is desperately trying to stem the Lebanese lira’s loss of value by pumping dollars into the currency market. To date, its efforts have had scant tangible impact with the lira trading on the parallel market at more than a 95 percent value loss from its officially pegged rate to the US dollar.

The country's financial woes continued to worsen yesterday, with the Energy Ministry again hiking fuel prices as the national currency plumbed yet new lows. The prices of 20 liters of 95-octane and 98-octane were increased by LL23,400 and LL24,200, respectively, to LL374,800 and LL387,600, while that of diesel increased by LL33,000, reaching LL393,400. A tank of cooking gas now costs LL345,500, an increase of LL26,200. According to George Brax, a representative for gas station owners, the price rise is due to the international increase in gasoline costs as well as the depreciation of the lira, which has now lost more than 15 percent of its value since the start of the year. The national currency fell below LL33,000 to the US dollar on the parallel market yesterday afternoon before returning to LL31,700 as the evening progressed. Cars waited in line at gas stations to fill up fearing further price increases, while protesters took to the streets around the country, burning tires and expressing outrage over the country's dismal economic state amid an ongoing political stalemate. Today marks three months since Najib Mikati’s cabinet last convened as a disagreement between ministers over the future of the Beirut port blast investigation persists. Political paralysis wrought by this issue has now characterized the government for more than three-quarters of its time in office.

Many bakeries and supermarkets across Lebanon yesterday afternoon reported running out of Arabic bread stock and blamed the shortage on poor production and panic buying. However, Economy Minister Amin Salam said there was no bread or flour crisis, and explained that the ministry will issue new, “fair” bread bundle prices today. The reported panic buying had ensued yesterday morning after the head of the Bakery Owners Union in Mount Lebanon said that owing to wheat and flour shortages in the country, bread may no longer be available in adequate quantities. “We are facing a shortage of wheat reserves in some flour mills because of late payments for imports, especially at the level of the opening of credit lines by the central bank,” Seif said during an interview. Some elements of bread production, including flour, continue to be subsidized by the state, while the cost of others fluctuates in line with the lira’s parallel market rate.

The Internal Security Forces said yesterday they had detained the “mastermind” behind a smuggling operation in September 2020 that resulted in the deaths of seven people. According to the ISF, three people were detained on Jan. 5 after they were discovered in possession of $7,500 worth of gold bracelets. The defendants then admitted that the bracelets were a profit from smuggling activities to Cyprus in which they were involved. On Sept. 18, 2021, the United Nations High Commissioner for Refugees issued a statement saying it was “deeply concerned by the spike in self-organized boat movements to Cyprus. The UNHCR also stated that between July and September of last year, there were at least 21 boat journey attempts from Lebanon to Cyprus by Syrians, Lebanese, and migrant workers, owing to the worsening economic situation in Lebanon.

The Cassation Attorney General’s office defended itself yesterday after it had been targeted with a series of attacks for not taking any action against Marwan Habib. Habib has previously been accused of sexual harassment by multiple women in Lebanon. In a statement the court of cassation blamed some media outlets for "attacking" the Lebanese judiciary system and "doubting" its work after reporting that Habib had not been arrested in Lebanon, the prosecution recalled that ''in Lebanon, the accused was detained for 48 hours during the preliminary investigations carried out in 2019" and that he had been targeted by prosecutions launched by the criminal judge of Mount Lebanon. The statement issued by the court does not discuss the consequences of these procedures.

In case you missed it, yesterday’s must-read from L’Orient Today: “Dreaming of Europe … 82 Lebanese went through hell in the Mediterranean”