A group of migrants aboard a makeshift boat found themselves off the Greek coast, before being incarcerated for several weeks in a Turkish prison. 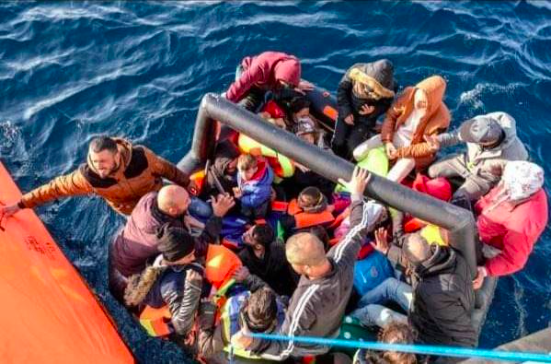 More than twenty people clung to a life raft as they were rescued by a Turkish vessel. (Credit: Photo provided by survivors)

They were ready to take all the risks involved to be able to flee Lebanon and the misery in their home country. They saw death closely, were pushed back, imprisoned and ultimately sent back to square one.

In a nutshell, that is the story of 82 Tripolitans who embarked on Oct. 5 on a crazy journey to enter Europe across Italy. It was an illegal journey that came to a sudden end off the coast of Greece, before leading them to Turkish jails, according to testimonies some of them gave to L’Orient-Le Jour after they wound up back in Tripoli's Mina neighborhood.

This group of 82 Lebanese includes people of all age groups, some members of the same family, others attempting the route alone. They all revealed having returned to the life they sought to escape, in a country hit by a crisis. They returned to the poorest city on the Mediterranean Sea, traumatized and deprived of their paltry savings and illusions.

“The idea of emigrating by hook or by crook had tormented me since early 2020, similar to many friends and neighbors I have here in Mina,” Osman, a 24-year-old illegal migrant, says. “We all live in extreme poverty.”

A group of the Mina residents agreed that it is necessary to escape this misery. The plan was hatched gradually. “We all contributed to the purchase of a small boat that would take us away from the hell we live in in this country and from this life that increasingly resembles death,” he adds.

Abdel Rahman, 29, the father of a little girl and a newborn, is also a member of this group. He did not hesitate to be part of this plan, along with his wife and children. “It was so hard for the families to collect the cost of the boat, which amounted to $20,000, with each person paying around $270,” he says. “Then, we decided to sail off Qalamoun rather than Mina, which is a more famous port and we would have attracted more attention from the Lebanese Coast Guard had we sailed from there,” [he explains].

Abdel Rahman adds that many families used their meager savings, selling the little old furniture they still had to afford to pay for the boat, navigational and lighting equipment, and more than 4,000 liters of gasoline, which theoretically would enable them to reach Italy.

The journey was quick to turn into a misadventure, as the boat barely left Lebanese waters. The overloaded boat moved slower than many of its passengers had anticipated. They were soon chased by the Lebanese Navy. However, they managed at the last moment to reach international waters and escape the Lebanese Army who had to return. Was this a stroke of luck? Not really, the passengers’ ordeal had just started.

Arrested by the Greek authorities

“The first few days went by without major problems,” Um Mohamad, who had gotten on board with her two children, says.

“We passed Cyprus and then Turkey. Once off the coast of Greece, we were surprised by a very bad storm that damaged our boat. The boat was quick to take on water. That’s when we feared drowning. One of the passengers contacted the Greek security forces to ask them to have the boat berth at a port in order to be repaired and give us food,” [she adds].

According to her, the Greek security forces allowed the boat to reach an island, before arresting its passengers and forcing them onto a navy vessel.

Whether adults or children, all of the illegal migrants spoke about the physical abuse they faced in this episode. They said they were left without water, food or blankets in the cold at night, before being literally thrown into four dinghies.

L’Orient-Le Jour reached out to the Greek Embassy to comment on the claims, but had not received an answer at the time of writing.

Left to the mercy of the waves in the dinghies, the illegal migrants were in desperation.

Hamza, one of the young passengers, recalls, “We owe our interim rescue to a young man who retrieved a phone hidden in a shoe, with a battery only 7 percent charged. He called the Turkish 112 emergency number and explained our situation to the security officers in English.”

The Turkish vessels came to the rescue of the 82 Lebanese adrift at sea. The military transferred them to Izmir where the city’s governor and journalists welcomed them in a small camp. They promised them a speedy return to Lebanon. Yet, that was just a prelude to another misadventure.

There was nothing wrong with the way the Turkish authorities treated them in the first few days, Hamza recalls. However, three days later, all the passengers were moved to Aydin town and taken into custody.

Women and children were put on one side of the facility; the men were on the other.

“We were in a prison, not in a camp,” Hamza underscores. “We rubbed shoulders with drug traffickers, ISIS terrorists and murderers.”

Contacted by L’Orient-Le Jour, the Turkish Embassy in Lebanon refused to comment on the illegal migrants’ narrative.

In prison, the treatment of illegal migrants was much more aggressive than in front of the journalists’ cameras. Hamza recounts about the 39 days during which he and his companions were bullied and prevented from contacting their relatives in Lebanon.

He affirmed that they were served bad food and were rarely allowed to drink. It was literally a “traumatizing” stay, he told us. “One day, a prisoner of Iranian origin died of a cerebral embolism,” Hamza says.

“Dozens of women who shared the same cell panicked, got dizzy and passed out. Hearing their screams, we decided to go on strike and shout out to the jail warden. All we got was the punches, and the bruises are still visible on our bodies,” [Hamza adds].

Um Mohamad thought that she would never make it out of this prison alive. The most distressing part, according to her, was the pressure placed by ISIS inmates who tried to rally the prisoners behind their cause and to impose their ideology. “The complaints we made to the jail warden didn’t help,” she says.

This mother is the one who finally initiated an action to set the illegal migrants free.

“Once I was allowed to contact my sister in Lebanon from prison, I asked her to speak in favor of our case before the media and officials,” she says. “This is probably what prompted the governor of Izmir to visit the prison and give his orders to stop the mistreatment we were subject to.”

In Lebanon, Sheikh Mohammad el-Ech, imam of the Maryam bint Omran mosque in Mina, took up the cause and formed a committee for the release of the detainees.

He explains to L’Orient-Le Jour that he contacted various political forces, in addition to General Security chief Abbas Ibrahim, who promised him that he would follow up on the case.

He laments the timorous attitude of some politicians, who were more anxious not to impair relations with Greece and Turkey than to assist the Lebanese.

Going back to life as it was

Hamza recounts, “On the last day, we were asked to go to a room where we got tested for COVID-19. Then, we were told that we would be repatriated to Lebanon.”

The 82 Lebanese were transported by bus to Adana where they were handed over to the Lebanese law enforcement officers who had traveled to escort them back to Lebanon. The illegal migrants say that they could not recover the small sums of money that had been confiscated from them at the time they were detained, as the Turkish authorities said they spent the money seized on travel costs.

“This journey ended up resembling a temporary death,” Hamza says. He accuses the Lebanese authorities of infuriating people to despair and to extremes which leads to tragedies. “The majority of this group of miserable people are unemployed. This country does not allow us to lead a decent life,” he says.

Many are those who took the risk in the hope for a better life. While this group sailed off on its own, others are victims of illusion sellers and illegal traffickers that Lebanese law enforcement has been actively chasing, a security source says.

According to the source, this traffic has been flourishing since the summer of 2020: the boats sail off the coast in broad daylight, claiming that they are on a tourist trip to one of the Lebanese islands, before changing their path and exiting Lebanese waters.

They were ready to take all the risks involved to be able to flee Lebanon and the misery in their home country. They saw death closely, were pushed back, imprisoned and ultimately sent back to square one.In a nutshell, that is the story of 82 Tripolitans who embarked on Oct. 5 on a crazy journey to enter Europe across Italy. It was an illegal journey that came to a sudden end off the coast of...