European Union development subsidies of more than 6 million euros, designed to improve the Democratic Republic of Congo’s infrastructure, were awarded to a company affiliated with Glory Group, the successor entity of a conglomerate led by the Lebanese businessman Ahmed Tajeddine. The conglomerate has been sanctioned by the United States since 2010 for allegedly financing Hezbollah.

This was reported by L’Orient-Le Jour as revealed by the Congo Hold-Up investigation based on 3.5 million confidential documents from BGFIBank obtained by Mediapart and The Platform to Protect Whistleblowers in Africa (PPLAAF) and coordinated with the media network European Investigative Collaborations (EIC). The leaked information also shows that, during the same period, the company receiving the funds made transfers to accounts in the United Arab Emirates used by Kassem Tajeddine, who is also on the US’s radar, in order to launder money and circumvent sanctions. 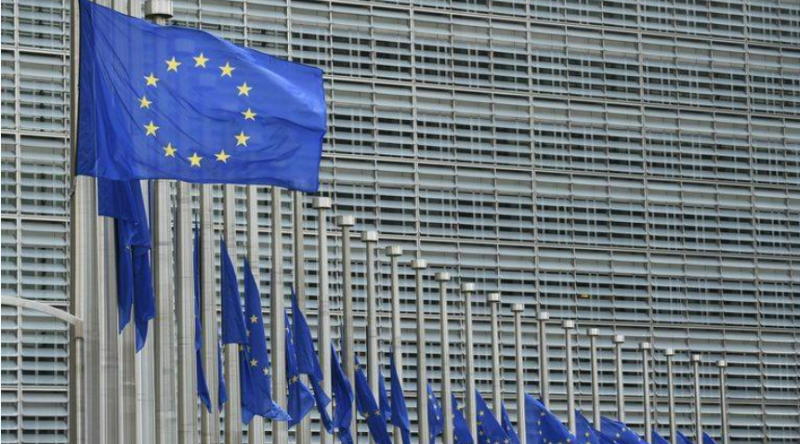 A company linked to a conglomerate under US sanctions received millions of euros from the European Development Fund (EDF) between 2015 and 2017. (Credit: AFP Archives)

Placement on the Specially Designated Nationals (SDN) list of the US Treasury’s Office of Foreign Assets Control (OFAC), a financial weapon in the United States’s counter-terrorism fight, prohibits any national entity or resident from doing business with sanctioned individuals.

Given the primacy of the dollar in interbank trade, inclusion on the SDN aims to exclude sanctioned entities or people from the international financial system. However, this did not prevent a subsidiary of an industrial conglomerate under US sanctions since 2010 from receiving millions of euros in subsidies from the European Development Fund from 2015 to 2017, according to the Congo Hold-Up investigation.

The subsidiary in question, the Congolese Company of Modern Construction — known by its French acronym SCCM — received the EDF funds as part of a government contract to improve the DRC’s judicial, police and naval infrastructure. Of the 6.6 million euros that the EDF transferred to the company, at least 3.8 million euros were transferred to the SCCM’s accounts at BGFIBank-RDC, while the rest was transferred to other accounts. According to the SCCM, which was contacted by Congo Hold-Up, the EU-financed contracts “would amount to approximately 9 million euros.”

“There were no irregularities,” it added.

However, SCCM is affiliated with Glory Group, the successor entity of Congo Futur. This conglomerate, led by the Lebanese businessman Ahmed Tajeddine, who was convicted in Belgium in 2008 of forgery and money laundering, has been under US sanctions since 2010 for allegedly financing Hezbollah 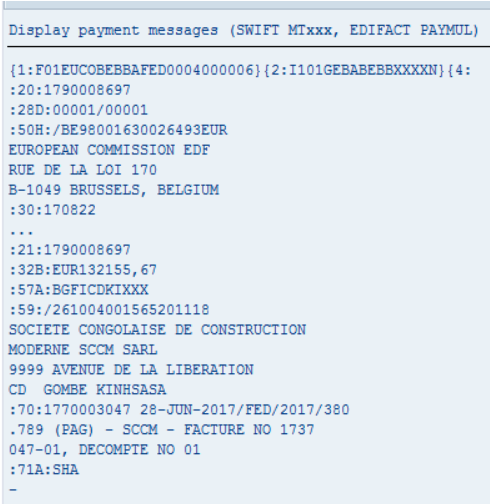 Payment extract between the EU and the SCCM. (Credit: PPLAAF / Médiapart document)

From a purely legal perspective, under the US justice system, there is no risk of OFAC sanctions.

“There are no particular legal risks as long as these payments were made in euros and they have nothing to do with US citizens. In addition, the EDF is attributed sovereign immunity, particularly since it provides support for development and does not carry out commercial activities,” said Robert Clifton Burns, a legal counsel in Crowell & Moring's Washington D.C. office and an expert on sanctions.

If there is a problem, then, it is of a reputational nature.

The European Commission, contacted by Congo Hold-Up about potential links between the SCCM and Congo Futur, asserted via a spokesperson that “the Commission did not have any information on these alleged links” and that “they are contracts for works and supplies, awarded following a competitive process, in accordance with our contracting procedures. The Commission is able to confirm that its procurement rules have been fully respected at all stages of the procedure.”

On paper, Congo Futur and SCCM are two different companies, both at the managerial and the shareholder levels. The SCCM is managed by a Lebanese citizen named Abdel Karim Berri, according to the Congolese company register. Luzerne Commerce Company SAL Offshore, a Lebanese offshore company, owns a 90 percent stake in it, and its manager owns the remaining 10 percent.

However, several consistent indicators establish the link between the SCCM and the Tajeddine conglomerate. First, The SCCM is described in the BGFIBank correspondence as a subsidiary of Glory Group. Second, the real estate company is based in the Future Tower, the former headquarters of Congo Futur, in the heart of the business district of the capital, Kinshasa. Third, many shareholders and key employees of Congo Futur are directly or indirectly involved in SCCM. 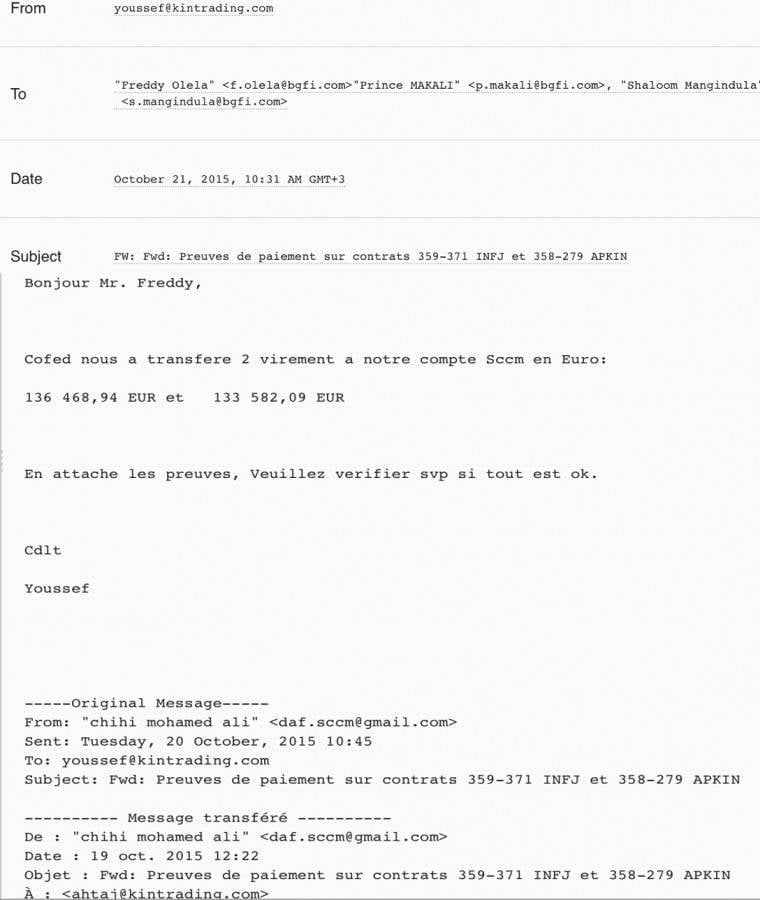 Also, a number of people engaged in SCCM’s activities communicate with BGFIBank to carry out money transfers, currency exchanges, responses to requests for information and other actions on behalf of SCCM using a work email other than that of the company: @kintrading.com.

However, Kin Trading SPRL has been described by Commerzbank since 2011 as “an operational entity of Congo Futur.” The German bank used this argument to notify BGFIBank RDC that it would not transfer funds requested by Kin Trading, in order to comply with OFAC’s counter-terrorism sanctions.

SCCM firmly denies this association, and refers only to a commercial relation “by the book” with Kin Trading, limited to “the purchase of concrete, construction of warehouses.”

From SCCM to Kassem Tajeddine

While SCCM received European funding, it transferred millions of dollars from its accounts at BGFIBank to several companies located in the UAE. One of these companies stands out: Epsilon Trading FZE. The company belongs to Ahmed Tajeddine’s brother, Kassem Tajeddine, who is on the SDN list.

According to the leak, Epsilon Trading FZE received more than $6 million in direct transfers from SCCM accounts at BGFIBank.

Epsilon Trading FZE is particularly significant because Kassem Tajeddine acknowledged having used the company to launder money and circumvent US sanctions.

He was found guilty in US courts in 2017 of having deliberately concealed his ties to Epsilon Trading FZE to carry out more than $27 million in transactions with US companies, thus evading the sanctions.

He was sentenced to 60 months in prison and fined $50 million, before being freed in 2020 on “compassionate grounds” because of the health risks posed by COVID-19.

Regarding these transfers to Epsilon, SCCM admits that they were “possibly” made “for the purchase of materials or machinery,” while insisting that it did not know that Epsilon belonged to Kassem Tajeddine who it “doesn’t even know.”

Nevertheless, the corresponding banks raised the alarm on the risk of money laundering associated with the SCCM. In September 2016, Maltese FIMBank submitted a request for additional information to the Congolese subsidiary of BGFIBank concerning SCCM and Luzerne.

In several email exchanges, the BGFIBank reassured the bank about the nature of the transfers and, in an email addressed to FIMbank on Oct. 27, even stressed the fact that “at times, it [the SCCM] received funding from the EDF.”

FIMbank declined to answer Congo Hold-Up’s questions on its “former banking relationship” with BGFI-RDC citing “confidentiality rules.” However, it asserted that it maintains “the highest ethical and compliance standards in its dealings with its counterparties.”

BGFIBank ended up closing the accounts of the companies tied to Congo Futur, including those of SCCM, while insisting “that there is no link between these companies” and “CONGOFUTUR group” [sic] and “that the auditing of their transactions does not reveal any violation of the anti-money laundering and terrorism financing regulatory instructions,” as written in an email from the Congolese subsidiary to BGFIBank Paris on Nov. 6, 2017.

Correction: This article was modified on 12/7/2021 to correct calculation errors on the total amounts transferred respectively to SCCM and Epsilon.

Placement on the Specially Designated Nationals (SDN) list of the US Treasury’s Office of Foreign Assets Control (OFAC), a financial weapon in the United States’s counter-terrorism fight, prohibits any national entity or resident from doing business with sanctioned individuals.
Given the primacy of the dollar in interbank trade, inclusion on the SDN aims to exclude sanctioned entities or...