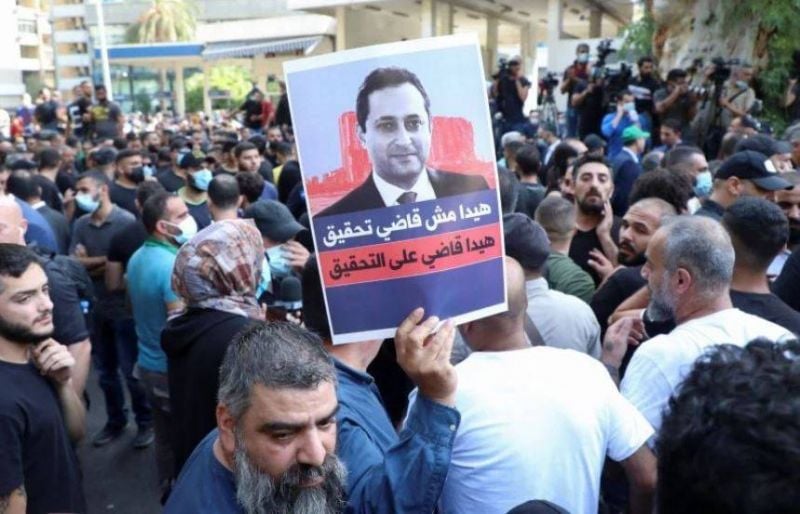 Hezbollah, Amal and Marada Movement supporters rally on Oct. 14 outside the Justice Palace for a protest against Judge Tarek Bitar. (Credit: Mohammad Azakir/Reuters)

“We won’t get to the truth...this fixation on the Beirut Blast is a distraction,” a Hezbollah official told my colleague and me after his organization invited us for a “cup of coffee” following the publication of our investigation into the devastating explosion at Beirut’s port on August 4, 2020. The “distraction” he was referring to was Judge Tarek Bitar’s investigation into the explosion, which Hezbollah and the rest of Lebanon’s corrupt, avaricious political establishment have relentlessly attacked, undermined, and obstructed.

The parties blamed Bitar for the violence, accusing him of “igniting tensions” in the country, and party supporters popularized hashtags on Twitter such as “this blood is on your hands, Bitar” and “Bitar is playing with fire.” Pro-Hezbollah media outlets wrote that the “leaders of the resistance” were awaiting “closing the file of madness led by Tarek Bitar.”

All of the Shia ministers threatened to resign from the government, leading Prime Minister Najib Mikati to say he would not convene a cabinet meeting until a “solution” to Bitar’s investigation was found. The first judge leading the investigation was removed from his position in February after two former ministers he charged filed a complaint against him. The events and the aftermath underscore the false narrative Lebanon’s warlords-turned-politicians have forced upon the Lebanese since the end of the civil war: the cost of justice is civil strife.

While Hezbollah and Amal have recently been leading the attacks against Bitar, most of the political establishment has united in their opposition to him. Two weeks ago, three former prime ministers - Saad Hariri, Tammam Salam and Fuad Siniora – pledged their support for an independent judiciary and called for the removal of all immunities after the deadly clashes, but they (as well as Najib Mikati, who had not assumed his post yet) had previously accused Bitar of “political suspicions” when he summoned former Prime Minister Hassan Diab for interrogation. The head of the Druze Progressive Socialist Party, Walid Jumblatt, and the leader of the Christian Marada Party, Sleiman Frangieh, have also accused Bitar of being politicized. Such unfounded accusations only serve to undermine the investigation and increase public disillusionment with the process.

All the former ministers Bitar has identified as suspects during his investigation — Youssef Fenianos (Public Works and Transportation, Marada); Ali Hassan Khalil (Finance, Amal) ; Nouhad Machnouk (Interior, Independent) and Ghazi Zeaiter (Public Works and Transportation, Amal) — have refused to show up to their interrogation sessions. The former ministers have filed multiple legal cases to remove Bitar, some of which appeared aimed solely at obstructing the investigation, and the security forces have not executed Bitar’s arrest warrants against Fenianos and Khalil.

What reasons did Hezbollah officials offer to justify their belief that Bitar is instrumentalizing the Beirut blast to “achieve political ends, including getting the president and Hezbollah?”

First, they accuse Bitar of singling out some politicians for prosecution, particularly Hezbollah’s allies. But when the political parties that the accused politicians belong to circulated a petition in Parliament to establish a special court to prosecute the ministers — a move widely seen as an attempt to curtail Bitar’s investigation — they did not identify any other ministers who should also be investigated.

Further, Bitar’s charges largely track our August investigation into the Beirut blast, and we have published all the documentation from our investigation for the public to examine.

The Hezbollah officials’ second reason for doubting Bitar’s credibility is that he is violating the principle of legal immunity for ministers, whom they inaccurately claim can only be tried by a special court convened by Parliament. Ministers can be prosecuted in this special court if Parliament accuses them of high treason or breaches of duty. But given that the crimes the ministers are accused of go beyond regular breaches of duty and include homicide, and given that Parliament has not accused these ministers, those ministers are subject to trial by the regular judiciary.

The insistence by Hezbollah, other political parties, and even religious figures — such as Grand Mufti Abdel-Latif Derian, and, now, Maronite Patriarch Bechara al-Rai — on prosecuting the ministers in a special court is a transparent attempt to evade accountability. Such a special court, which requires a two-third vote in Parliament to be activated, has never been established. Many countries grant their politicians some form of immunity from prosecution while in office, but those are supposed to safeguard the separation of powers and protect politicians from prosecution on politically motivated charges, not to allow politicians to escape prosecution for grave crimes.

Third, Hezbollah officials questioned why Bitar has not yet released the results of his technical investigation into the causes of the blast so that insurance companies can pay out claims to affected residents and businesses. Former Economy Minister Raoul Nehme made a similar request to Judge Bitar in April, asking him to rule out acts of terrorism and war as possible causes of the blast to speed up the settlement of insurance claims. But Bitar is prohibited by law (Article 53 of the Code of Criminal Procedure) from disclosing any part of his investigation before he issues indictments.

We have found no evidence to suggest that Bitar is politicizing the Beirut blast probe. Yet, Hezbollah and the rest of the political establishment have upped the ante by demanding nothing less than Bitar’s removal from the case in a bid to undermine the investigation. The question is why. Yes, the investigation has implicated some Hezbollah members and their allies, as well as individuals from many of the major political parties in the country. But the course of this investigation also has implications for the future of justice in the country – which is why it must continue. Public, fair trials of those responsible for the Beirut blast could shatter the reigning culture of impunity in Lebanon. Fundamentally, the success or failure of the investigation will make clear if Lebanon is a country with rule of law, including against senior political and security officials who belong to powerful and previously untouchable political parties.

Rule of law requires that criminal investigations, prosecutions and trials are able to proceed without fear or favor, without political or other outside interference, resulting in fair trials where justice is served and seen to be done. Especially for the most serious violations of the right to life.

Accountability for the Beirut blast, could help restore the public’s faith in an independent judiciary and open the door to more prosecutions of high-level officials implicated in corruption, financial mismanagement, torture, and other grave crimes.

But Bitar needs all the help he can get, which is why we, many other rights groups, and the families of the victims have been advocating for an independent, United Nations-appointed fact-finding mission into the blast. The mission could cooperate with Lebanon’s judiciary and bring much-needed resources and technical expertise to the investigation. It could also raise the costs of political interference and the intimidation of people fighting for justice. Hezbollah officials dismissed calls for an international investigation, claiming that the results will be “fabrications.” What is the alternative, we ask? Replying that we may never know the truth is simply not an acceptable answer.

Aya Majzoub is the Lebanon researcher at Human Rights Watch.

“We won’t get to the truth...this fixation on the Beirut Blast is a distraction,” a Hezbollah official told my colleague and me after his organization invited us for a “cup of coffee” following the publication of our investigation into the devastating explosion at Beirut’s port on August 4, 2020. The “distraction” he was referring to was Judge Tarek Bitar’s investigation into...