The Free Patriotic Movement appears to be stuck between a rock and a hard place: how to keep the port explosion probe unhindered without letting go of its Shiite ally in the run-up to the parliamentary elections 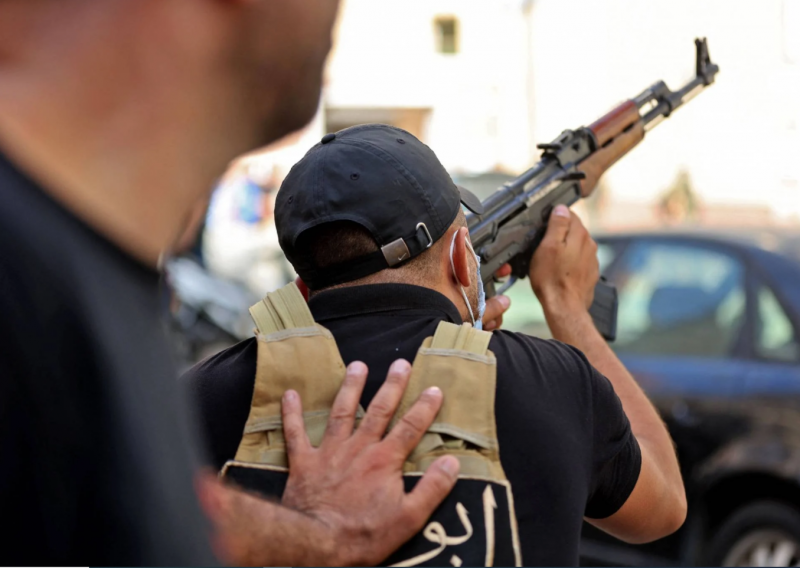 A militiaman in Tayyouneh on Thursday, Oct. 14. (Credit: Anwar Amro/AFP)

Are we witnessing the worst crisis between Hezbollah and the Free Patriotic Movement since the beginning of their alliance, forged on Feb. 6, 2006, at the Mar Mikhael Church in Chiyah?

For the first time, tensions are running high between the two political parties.

Hezbollah has been seeking to get rid of Tarek Bitar, the Beirut port explosion probe’s lead investigator, after the judge called several figures close to the Shiite party in for investigation.

The FPM finds itself in an untenable position. How will it continue to uphold its rhetoric of defending the rights of Christians, whose neighborhoods were devastated by the blast, when its main ally seeks at all costs to brush aside the judge in charge of the case?

How will the FPM position itself after the clashes that erupted on Thursday between the supporters of Hezbollah and the Amal Movement, and armed men allegedly belonging to the Lebanese Forces? (The LF has denied this.)

The Aounist camp is not willing to allow its archenemy, the LF, to present itself as the Christians’ only defender. Yet the FPM cannot sever ties with its precious Shiite ally, especially with the parliamentary elections slated for March 2022 fast approaching.

While FPM leader Gebran Bassil has always managed to balance out conflicting positions, this time around he appears to be stuck in limbo.

Until a few days ago, Hezbollah and the FPM were jointly preparing for the upcoming parliamentary elections, which they intend to form an electoral alliance for.

On Oct. 12, however, Hezbollah Secretary-General Hassan Nasrallah delivered a fiery speech in which he accused Bitar of “politicizing the investigation,” reprimanding him for not having questioned Aoun — an insinuation that the Christians were being protected and the Shiites were the only side targeted by the probe.

This changed the equation between the two allies.

The president has repeatedly voiced his support for Bitar. Aoun could not turn a blind eye to the investigation given its paramount significance for Lebanese Christians, especially those who were greatly affected by the 2020 explosion.

While Aoun was among the top-ranking officials who were aware that the ammonium nitrate that later blew up was stored at the port, he has not been called in for questioning because he is shielded by legal immunity as president.

Moreover, the fact that Tony Saliba, the State Security director general, who is known to be close to the president, was also not questioned as per a decision by the Higher Defense Council and the Public Prosecution drew Hezbollah and Amal’s ire, with both parties condemning what they said was the investigation’s double standards.

The source added that in his speech, Nasrallah also mentioned Michel Sleiman, a former president, in a bid “to cushion the blow, but it is clear that he was attacking Aoun.”

During the last government session, tension between the president and Amal’s and Hezbollah’s ministers were laid bare.

Culture Minister Mohammad Mortada, an Amal minister, asked for Bitar to be dismissed from his duties as lead investigator — a request Aoun turned down.

The president adjourned the session, stressing the principle of separation of powers. This suggests that Aoun rejects any government decision to oust Bitar.

Meanwhile, according to Amal sources, Aoun is using the investigation to settle scores with Berri, with whom his relations have been strained.

“Berri considers this to be a personal matter,” the source close to the Parliament speakers says.

Bitar implicated two former Amal ministers, Ali Hassan Khalil and Ghazi Zeaiter, both of whom are close to Berri.

A source told L’Orient-Le Jour that Berri personally ordered the deployment of 200 party members around Hassan Khalil’s house when Bitar issued an arrest warrant for him.

Hezbollah appears to be less confrontational. The party of God believes that Aoun has no other choice but to support the investigation given the international pressure he’s facing, and the Christians’ hopes and expectations vis-a-vis the probe.

“The party is still asking Aoun to prevent Bitar from carrying out his investigation,” a source close to Hezbollah circles says.

According to a Hezbollah source, both parties have been trying to find a compromise for several days.

The president was supposed to propose a solution to allow the judge to continue interrogating civilians and directors general without questioning ministers, MPs and other senior officials, whose case would fall directly under the Higher Judicial Council.

“But things are now complicated because Bitar is not backing off,” a second Hezbollah source says.

Despite all the tension, efforts are being made on both sides to avoid a breakup.

“The differences between the two parties are tactical, not strategic,” a Hezbollah official explains.

Asked about the remarks attributed to Salim Jreissati, the president’s adviser, who reportedly said, “We’ve had enough of Hezbollah,” the source argued that it was a strictly populist statement.

The clashes that rocked the capital on Thursday, however, complicate any compromise between the two parties.

“We will not allow anyone to take the country hostage to their own interests,” Aoun said in the gunfire’s aftermath — a jab at Amal and Hezbollah.

The FPM also released a statement saying, “No one can reserve for themselves the right to restrict the freedom of expression by any means, in particular by violence, or to impose by force their opinion on others.”

The Aounist camp may end up the real loser after these developments, especially because its supporters have become increasingly critical of the party’s alliance with Hezbollah.

Meanwhile, the LF probably managed to score a few points with the Christians.

Hezbollah, meanwhile, has mobilized its popular base against LF leader Samir Geagea, and will likely not show any signs of slowing down its political escalation until Bitar is out of the equation.

As for Amal, the tensions between its Shiite ally and the FPM are doing their job.

Berri’s party is likely to take advantage of the situation to undercut the alliance between the two a few months before the elections and to consolidate the Shiite ranks, unless Hezbollah and the FPM overcome their differences and run as a united list.

Are we witnessing the worst crisis between Hezbollah and the Free Patriotic Movement since the beginning of their alliance, forged on Feb. 6, 2006, at the Mar Mikhael Church in Chiyah?For the first time, tensions are running high between the two political parties.
Hezbollah has been seeking to get rid of Tarek Bitar, the Beirut port explosion probe’s lead investigator, after the judge called...