The last obsessions of Michel Aoun

The president is fighting his final battles before the end of his term next year to defeat what he calls the ruling troika of Hariri, Berri and Joumblatt 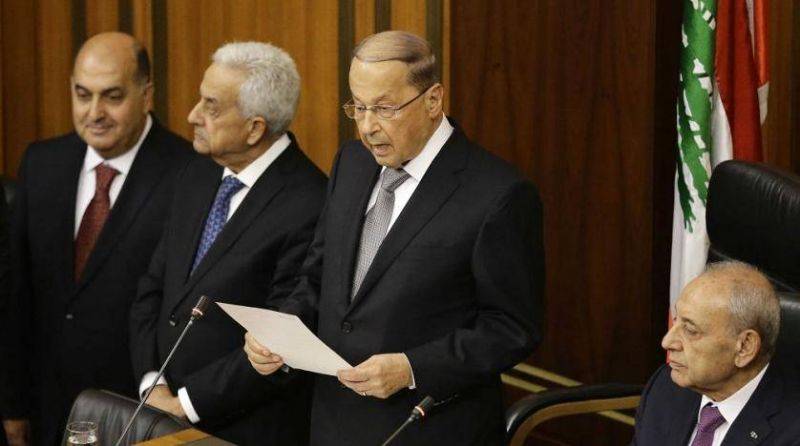 Michel Aoun takes the oath of office upon being elected president on Oct. 31, 2016. (Credit: AFP)

In the Baabda palace lounge, where the president receives his guests in small groups, he is often heard saying, “I will put them all in jail” — a claim the president’s office denies.

In his crosshairs, Aoun has all his political opponents, all of those he accuses of having prevented him from accomplishing the great plans he had for the country, ranging from Saad Hariri and Nabih Berri to Walid Joumblatt and Riad Salameh.

Just like Don Quixote and the windmills, the president is convinced, and seeks to convince his entourage, that he is leading an unending fight, alone, against the rest of the world.

For almost four decades, Aoun has been in constant search of an enemy. This is what he lives for. Conflicts feed both his ambitions and his obsessions.

“With Aoun, peace can only be temporary,” says one of the president’s old political opponents, who wishes to remain anonymous.

During the War of Elimination between the Lebanese Forces and Aoun in 1990, LF leader Samir Geagea described his archenemy saying, “Gen. Aoun is a cyclist who needs to keep pedaling in order not to fall down.”

The reconciliation that was sealed in 2016 between the two historic adversaries lasted just a few months. It wasn’t long before old habits took over again.

“Aoun always wants more. As soon as he gets something, he asks for something else, which is what makes relations with him impossible,” says a veteran politician who also wishes to remain anonymous.

Even the powerful Hezbollah appears unable to temper the impulses of its Christian ally, who, before the 2006 Mar Mikhael agreement between the two sides, presented himself as the fiercest opponent of the Shiite party.

Today, the president accuses Hezbollah of not having fulfilled its part of the deal by refusing to support him in his fight against corruption — the battle that he believes would allow him to save his presidential term.

Time to turn the page on the Taif Agreement

The president is now waging his last battles.

“It’s not about the government formation or the distribution of portfolios. It’s about fighting against corruption, against the troika that brought the country to ruin,” says a close associate of the president.

For Aoun, the troika of Hariri, Joumblatt and Berri is at the origin of all the country’s evils since the 1989 Taif Agreement.

“Michel Aoun is a pillar of the system he claims to be fighting against,” says the president’s opponent cited above.

According to the source, Aoun is still stuck in the late 1980s and wants to get his revenge.

“He only thinks of how to turn the page on the Taif Agreement. When he took office, he managed to regain much of the power he had at the time,” the source adds.

In exile, Aoun had to painfully watch as Lebanon’s former warlords divided the country among themselves. When he returned in 2005, he wanted to make up for lost time.

“Aoun wanted to accomplish in a few years what he believes Hariri, Berri and Joumblatt have achieved in 30 years,” says another opponent of the president.

The source adds, “All of this explains why he wants to be everywhere at the same time, even if this means doing everything and its exact opposite. He claims to want to rebuild the state and fight against corruption. But at the same time, he wants to bury the Taif [amendments to the] constitution — after having taken an oath to respect it — and restore the powers of the president.”

“He claims to be in favor of a secular state, but he also wants to defend Christian rights. He claims not to be part of the system but makes deals, and allies himself with all of the system’s pillars,” the source argues.

Meanwhile, Aoun’s entourage deems this harsh criticism as unfair and the result of an internal and external campaign designed to undermine his presidential term.

“Aoun is under siege — one that he cannot break free from,” says the source close to the president.

Among the president’s many obsessions, there is one that has especially aggravated him over the past few months: his desire to have Riad Salameh’s head.

The Aounist camp considers the governor of Banque du Liban as the guardian of the corrupt political system.

“For Aoun, the central bank is the black box that contains all of the country’s financial files and secrets,” the source close to the president says.

The forensic audit has become Aoun’s main concern, even if this means jeopardizing cabinet formation.

“When Hariri was prime minister-designate, Aoun proposed to launch an investigation against Riad Salameh. But the Future Movement’s leader refused. Had Hariri accepted, the government would have already been formed,” a member of the president’s Free Patriotic Movement says.

The same scenario is now playing out with Najib Mikati, the new premier-designate. Aoun told Mikati that the French support the idea.

“Mikati replied that it was necessary to form a government before tackling these issues,” a source close to Tripoli’s billionaire MP says.

A public figure who recently visited Baabda claims that Aoun told him he would not leave his post before he sees Salameh in prison.

Ironically, Salameh’s mandate as BDL governor was renewed as part of a deal between Hariri and Aoun in their 2016 compromise, which saw both return to power.

However, the economic and financial crisis rocking the country has called everything into question.

“Aoun views Salameh as a Pandora’s box that would allow him to take on all the others,” the president’s old political opponent says.

While Aoun’s close associates deny claims the president is seeking to take on the troika, others admit that these are indeed his intentions, but against everyone in the system.

These sources argue that the former army commander wants to declare war on Mohammad al-Hout, the Middle East Airlines president, who is a close friend of Hariri, and Berri’s Council for the South.

And depending on the political context of the moment, Aoun also tries to attack the Central Fund for the Displaced, an institution managed for years by a personality close to Joumblatt, whom the president prefers to Hariri and Berri, arguing that the Progressive Socialist Party leader is at least straightforward.

“Michel Aoun wants to declare war on the entire financial system. Either he manages to redistribute the shares of the cake to this advantage, or he works to transform the system to work to his own benefit and, above all, that of Hezbollah,” an expert in Lebanese politics says.

In the Baabda palace lounge, where the president receives his guests in small groups, he is often heard saying, “I will put them all in jail” — a claim the president’s office denies.In his crosshairs, Aoun has all his political opponents, all of those he accuses of having prevented him from accomplishing the great plans he had for the country, ranging from Saad Hariri and Nabih Berri to...