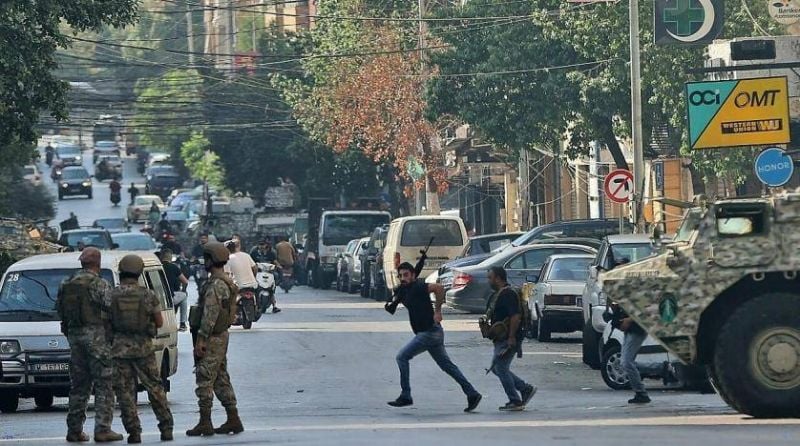 Gunmen from the Amal Movement and Hezbollah cross paths with Lebanese soldiers near clashes in the capital Beirut on Thursday. (Credit: Anwar AMRO/AFP)

Harrowing images of protesters fleeing for safety as armed men engage in street battles. Snipers targeting their victims from rooftops. Bullets sprayed along building facades with similar scars from before. And terrified children, in schools, hiding in hallways as their parents rushed to bring them home.

And, of course, the location. The former Green Line that tore Beirut apart from 1975–89. Whenever Tayyouneh and Ain al-Rummaneh enter news coverage, memory of our national tragedy and the sectarian division that defined us from East Beirut to West Beirut immediately comes to mind.

But unlike those years, there is one institution operating outside the state’s jurisdiction, and it is not challenging the Lebanese Army’s authority. This marks a fundamental difference from the breakdown of the early 1970s. Fatah’s arrival to Beirut set off a chain of events that the Lebanese state could not handle. What was once the national army’s monopoly on violence quickly eroded to the emerging of a multitude of militias, with the Kataeb Phalangist and many smaller ones forming a variety of right-wing nationalist factions against left-wing and Palestine Liberation Organization-sympathetic movements. And when the bus attack of April 13, 1975, occurred, the Lebanese Army — within a short period of time — splintered along sectarian lines. Political parties turned from politics to tanks and demarcation lines. Identification cards and last names determined life or death when crossing feared checkpoints.

But those terrible years of civil strife do not seem to be returning.

Hezbollah is different from the militias that defined our Civil War. It is a regional army financially and militarily supported by Iran’s Revolutionary Guard. It exists in parallel — rather than opposed to — the very institutions that define a country’s sovereignty. Its security network monitors all points of entry and exit (including our border with Syria), and it smuggles across and imports into Lebanon Iranian fuel when needed while sidestepping the state’s jurisdiction and ignoring sanctions.

The group circumvents and at the same time props up the regime. And it requires two key factors to survive in its current capacity: first, a functioning state, albeit one that is curtailed to the group’s security concerns and shields it from low-level attacks when necessary (this depends on constant coordination rather than direct conflict with the Lebanese Army), and second, no effective militia-like opposition to its role that could translate into civil war.

One day prior to the street battles and confrontation that defined May 7, the Lebanese government issued directives to remove the head of airport security and Hezbollah-allied Brig. Gen. Wafic Shkeir for ignoring illegal cameras monitoring the movement of March 14 figures, and to dismantle a parallel telecommunications fiber optic network used by the proxy group.

Within hours, those two cabinet-led decisions brought Hezbollah’s henchmen, armed partisan adversaries and snipers to Beirut and its surroundings. Up until then, Hezbollah had avoided domestic use of its weapons against local opponents.

The fighting subsided within days. Later that month, the death knell of the March 14 movement’s attempts at reclaiming independence was signed: the Doha Agreement, an end to the post-2005 state-led challenge to Hezbollah’s independent security apparatus. The culmination of those talks was the “national unity government” of 2008, and the proxy’s preferred way of operating within and without the Lebanese state, along with the marked threat of violence — an arrangement that still cements Hezbollah’s security autonomy and embodies paralysis. No major decisions are taken without its full consent; Hezbollah dictates war and peace, signs the Baabda Declaration of 2012 then sends its foot soldiers to battle in Syria, opening Lebanon to regional conflict; and the group arbitrates the limits to political reform, condemning and intimidating protesters demanding fundamental change to our lethargic and archaic way of governance.

And “national unity” continues to define our governance, in spite of Oct. 17, 2019’s nationwide protests against the entire political establishment and international outrage in the aftermath of the Aug. 4, 2020, port blast. The status quo dislodges more vocal and persuasive political opponents and spares those willing to pander to Hezbollah’s state capture.

In this context, the port blast investigation can operate only within limited terrain. Judge Tarek Bitar’s issuance of arrest warrants against former ministers invited dismissal claims and recurring suspensions, along with an alleged direct threat from Hezbollah security chief Wafiq Safa and accusations of foreign meddling from Hassan Nasrallah. Hezbollah-led protests against Bitar turned into street clashes on Oct. 14, amid calls for Bitar’s resignation.

The possibility of scaling back Bitar’s mission, removing him or handing the investigation to a military tribunal will likely end any serious probe into the port blast. This is reminiscent of the way Hezbollah handled the Special Tribunal for Lebanon’s indictments, waging a propaganda campaign aimed at tarnishing an international investigation into Rafik Hariri’s assassination as a politicized foreign-backed mission. In the end, Hezbollah was unable to stop the STL’s formation, but the group pressured the government into offering no technical capacity beyond paying its annual share and refused to hand over Salim Ayyache despite the verdict issued against him last year.

Bitar, through the judiciary, is indirectly challenging the post-2008 order that guarantees Hezbollah’s immunity. That is the current pressure point. The state has yet to determine Bitar’s fate, and while Hezbollah may not succeed in completely ending the investigation, the known threat of confrontation sets the stage to render a potential judicial verdict politically inconsequential.

In addition to the state remaining intact, the Lebanese Army is not disintegrating as it did in 1975. Morale has clearly taken a toll among the ranks, with rapid inflation devastating monthly salaries and reports of soldiers not showing up to duty. In the near term, however, no indications are pointing toward sectarian splintering.

As for Hezbollah’s armed opponents, when they emerge as they did this past August among Arab tribes in Khaldeh or more recently among snipers in Tayyouneh, they are chased down by both army units and Hezbollah fighters. The threat they pose is quickly mitigated.

What is detrimental, however, is that the underlying precondition for renewed civil strife remains. And that is the existence of an increasingly unpopular sub-state proxy within Lebanon’s borders, and the only Civil War-era militia to carry its special status as a “legitimized” armed actor. Whenever autonomous violence is uncontrollable by the state (as was the case during the buildup of the Civil War) or runs in parallel (as it has since 2008), the groundwork exists for a return to a militia vs. militia scenario.

At present, however, the Lebanese Forces remain a disarmed militia turned political party. Similar to other parties better defined as militias during the Civil War, it is true that armed partisans are spread throughout the country.

But that is not enough, in my opinion, to describe any of these factions as militias. Iran’s proxy cannot survive that level of security disorder. Our status quo is a direct consequence of Hezbollah’s preeminence and dominance over any potential armed opposition. One with unmatched infrastructure, foreign sponsorship and the capability to prevent state institutions from operating when they encroach on sovereignty.

This does not preclude further armed conflict, or the eventual formation of other militias beyond the army and the proxy’s control. But if that scenario were to come, we would be sliding back into the abyss.

For the time being, at least, we are not heading toward civil war.

We are diving deeper, instead, into perpetual paralysis.

Ronnie Chatah is the host of the Beirut Banyan podcast.

Harrowing images of protesters fleeing for safety as armed men engage in street battles. Snipers targeting their victims from rooftops. Bullets sprayed along building facades with similar scars from before. And terrified children, in schools, hiding in hallways as their parents rushed to bring them home.And, of course, the location. The former Green Line that tore Beirut apart from 1975–89....