Low voter turnout, Moqtada al-Sadr’s triumph, Iran’s defeat, civil society’s breakthrough — all are lessons for the land of the cedars 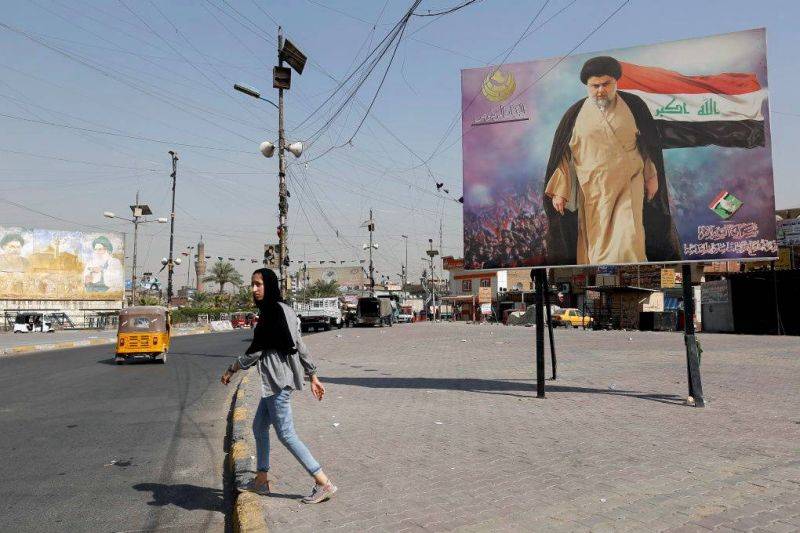 A poster of Shiite cleric Moqtqda al-Sadr, the winner of the Iraqi parliamentary elections. (Wissam al-Okaïli/Reuters)

Voting is a means to an end, not an end in itself. It can catalyze and then bolster the legitimacy of a political transition, just as it can serve as an instrument to reinforce or even rehabilitate the authorities in power, especially when not all parties are on equal footing.

These two dynamics do not necessarily contradict each other, as was shown by the Iraqi parliamentary elections held on Sunday, which resulted in some traditional forces consolidating their power while new players also emerged.

The scenario is not all or nothing, even at a revolutionary moment. This is the most important takeaway for the Lebanese opposition from the Iraqi elections.

Both Lebanon and Iraq have followed similar trajectories in recent years such that the Iraqi polls can be a source of interesting insights, although their contextual differences should not be underestimated.

The first lesson is that a massive popular uprising does not necessarily translate into high voter turnout.

Similar to Lebanon, a mass protest movement swept across Iraq in the fall of 2019, when hundreds of thousands of Iraqis took to the streets to call for the regime's downfall.

Even so, Sunday's elections were marred by a very low voter turnout, with only 41 percent of registered voters casting their ballot. The low turnout may be attributed to the shadow of abductions and political assassinations - 35 since 2020 - while some civil society candidates boycotted the polls amid a climate of fear and insecurity.

But this explanation alone does not suffice. Many Iraqis also believe that voting will not change the trajectory the country has been following for years, taking into account the strength of local militias, the jammed system and geopolitical issues.

Lebanon could go the same way in the next legislative elections, scheduled for March 27, 2022.

The voter abstention rate is usually around 45 percent in the land of the cedars, and one would think that recent developments would encourage more voters to go to the polls. But it could be the other way around.

Those who believe conditions are not yet ripe for change, those who are absolutely disgusted by Lebanese politics and those who can no longer benefit from cronyism as their leaders no longer have the means to bankroll it - all may join the list of those who usually abstain from voting.

In a recent poll by the Washington DC-based National Democratic Institute, 45 percent of the respondents said they will not vote, while 17 percent said they were undecided.

Perhaps as an indicator of what to expect in March, the Lebanese American University student council's elections, held last week, had a turnout of 49 percent, down from 62 percent the previous year, with the traditional parties clinching victory.

Low voter turnout serves the interest of the traditional political parties, whose electoral machines are much more developed.

A second lesson is that the traditional parties are able to reap the dividends of the popular uprising.

Sadr, who won big in the Iraqi elections, has been one of the strongest men in Iraq for years. But the Sadrists, who were heavily engaged in the popular protests, have always kept one foot in the government camp and another in the opposition.

This strategy, coupled with the party's much greater resources when compared with the other groups that were on the streets, allowed the party to broaden its electorate, probably by garnering some of the anti-establishment camp's votes.

Will a Lebanese Sadr emerge? At first glance it would seem that the Lebanese system would prevent this scenario, but Samir Geagea's strategy is undoubtedly closest to that of Sadr.

For months the Lebanese Forces head has been trying to play both sides of the field. He has sought to become the main representative of the traditional Christian forces, and has also tried to reach out to civil society in order to take the lead of the opposition.

Once again, the party's organization and the status of its leader could help attract some anti-establishment votes from outside its traditional electorate. This is true particularly if civil society formations come up to the starting line scattered and lacking clarity.

Failing to agree on a single candidate to lead the Beirut Bar Association is a small example of the scale of the task they have ahead.

A surprise for Hezbollah?

A third lesson is Iran's defeat.

Iranian interference is stronger in Iraq than in other Arab countries, but it is also arguably the country where it is most highly contested. The slogan “Iran out, out” was key during the October 2019 uprising, especially in southern Shiite provinces, and the Fatah alliance - the pro-Iran militias' political arm - suffered a major setback in the election. In fact, all of Tehran's allies lost points except for former Prime Minister Nouri al-Maliki.

Hezbollah occupies a different position in the Lebanese Shiite community and has never received a major challenge.

But Hassan Nasrallah's party has reason to be concerned when looking at the Iraqi elections' outcomes, particularly because it has been criticized by a segment of his adherents for its political alliances and its interventions in the rest of the Arab world. Will that be reflected in the ballot boxes, even as Hezbollah has been running the machine of cronyism at total capacity for months?

In case the party fails to prevent participation in the elections by “dissuading” its electoral opponents, some surprises might be seen.

The last lesson is the breakthrough brought about by civil society lists.

Despite the low voter turnout, and although most of the groups born from the uprising had decided to boycott the elections, those who had decided to run won at least eight seats, including the Imtidad movement, led by the pharmacologist Alaa al-Rikabi.

This seems to prove that these groups can have a say, even in a fully jammed system and an unfavorable context.

In case the opposition parties in Lebanon have the will to make a breakthrough in the next ballot, they will need to take an active approach; motto a clear, accepted and inclusive political line; and forge as large an alliance as possible. The clock is ticking.

Voting is a means to an end, not an end in itself. It can catalyze and then bolster the legitimacy of a political transition, just as it can serve as an instrument to reinforce or even rehabilitate the authorities in power, especially when not all parties are on equal footing.These two dynamics do not necessarily contradict each other, as was shown by the Iraqi parliamentary elections held on...