Here’s what happened over the weekend and what to expect today, Monday, Sept. 20, and this week 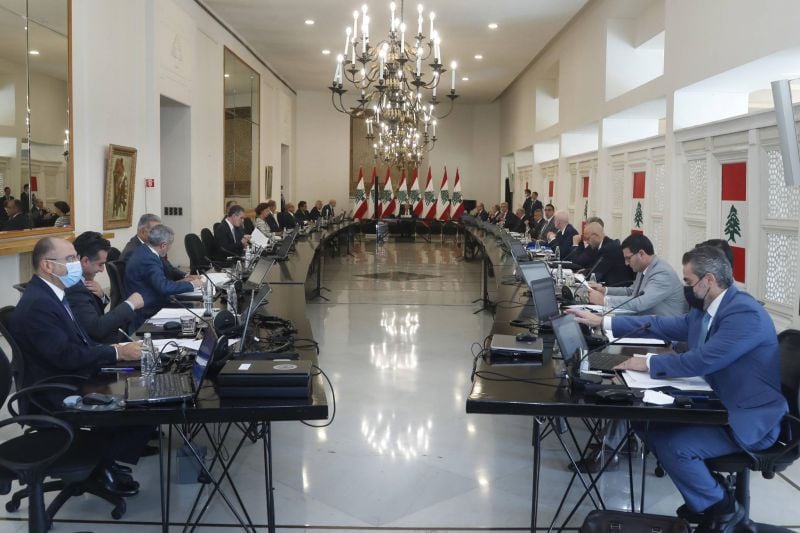 Parliament is set to vote today on whether to grant confidence to Najib Mikati’s cabinet, pictured here in a meeting on Sept. 16. (Credit: Dalati & Nohra)

Parliament will convene this morning to examine the new cabinet’s ministerial statement before voting on whether to grant it confidence. If the vote passes, it will end more than 13 months of caretaker-status government and enable Premier Najib Mikati’s government to formally embark on attempting to rescue the country from a 2-year-old economic crisis that has devastated the national currency, slashed depositors’ savings and led to alarming shortages of fuel and other essential goods. While the cabinet is expected to earn the legislature’s confidence, the 14-member Lebanese Forces parliamentary bloc will vote against the motion, the party announced in a statement last week. MP Fouad Makhzoumi (Ind./West Beirut) also announced that he would refrain from giving the new government his vote of confidence. The vote comes 10 days after the cabinet was formed.

Another convoy of trucks carrying Iranian fuel to Lebanon arrived overnight Friday, and a third convoy is expected this week. The first of the three convoys reached the Bekaa on Thursday morning. During a televised interview on Friday, Mikati described the Iranian fuel’s arrival as “a violation of Lebanon’s sovereignty.” Reflecting on Mikati’s comment, Said Khatibzadeh, a spokesperson for Iran’s Foreign Ministry, said yesterday that the fuel’s delivery was “a normal purchasing process by Lebanese traders.” Khatibzadeh added that Iran did not want to interfere in Lebanon’s internal affairs, but said that “if the Lebanese government wants to buy fuel from us to solve its problems, we are happy to be at its disposal.” Hezbollah leader Hassan Nasrallah hailed the arrival of at least four anticipated Iranian fuel shipments in a speech last Monday, which he said were purchased by Lebanese Shiite businessmen and would be distributed to needy institutions and individuals.

A day after the first Iranian fuel convoy arrived, the government took a step closer to completely eliminating fuel subsidies. A new cost list issued by the Energy Ministry on Friday hiked the cost of fuel by more than 40 percent from the previous prices, enacted on Sept. 8. Rumors of premature subsidy termination resurfaced as the ministry’s new pricing list coincided with an increase in the value of the lira, giving the impression that the new prices are perhaps in reality an approximation of unsubsidized market rates, even though the state has yet to formally announce an end to subsidies.

The Internal Security Forces confiscated 20 tons of ammonium nitrate in the eastern Bekaa Valley on Saturday. The owner of the Baalbeck warehouse where the chemical — the same one that blew up in the catastrophic 2020 Beirut port explosion — was found was arrested yesterday. The warehouse owner’s son was also detained, along with the driver of the truck that transported the chemical. On Sunday, the ISF also questioned Maroun Sakr, a businessman close to the Lebanese Forces who has a network of service stations in the country, according to a security source contacted by our sister publication, L’Orient-Le Jour. Sakr is also suspected of being in contact with the driver in custody. Bassam Mawlawi, the incoming interior minister, inspected the seized ammonium nitrate on Saturday, a ministry spokesperson told L’Orient Today.

Former Public Works and Transportation Minister Youssef Fenianos said he is the victim of “great injustice” in relation to the Beirut port explosion probe. On Thursday, the case’s lead investigator, Judge Tarek Bitar, issued a warrant for Fenianos’ arrest after he failed to appear for questioning. Fenianos accused Bitar of rushing legal proceedings. Lawyers representing Fenianos had filed two official appeals on Sept. 6 claiming that Bitar lacked the right to question the former minister. Separately, on Saturday General Security head Abbas Ibrahim said in a radio interview that he is “ready to appear before Judge Bitar” if incoming Interior Minister Bassam Mawlawi authorizes it. Meanwhile, Bitar’s previously scheduled questioning of former Prime Minister Hassan Diab in the case will not go ahead today, as Diab is outside the country. Diab, who was premier at the time of the explosion, which killed at least 218 people and devastated tracts of the capital, left Lebanon last Tuesday for the United States supposedly on a preplanned trip to visit his children, a spokesperson told L’Orient Today.

Want to get the Morning Brief by email? Click here to sign up.Parliament will convene this morning to examine the new cabinet’s ministerial statement before voting on whether to grant it confidence. If the vote passes, it will end more than 13 months of caretaker-status government and enable Premier Najib Mikati’s government to formally embark on attempting to rescue the country from a...