Gas from Egypt, mayhem at the pumps, food importers’ warning: Everything you need to know today

Here’s what happened yesterday and what to expect today, Thursday, Sept. 9 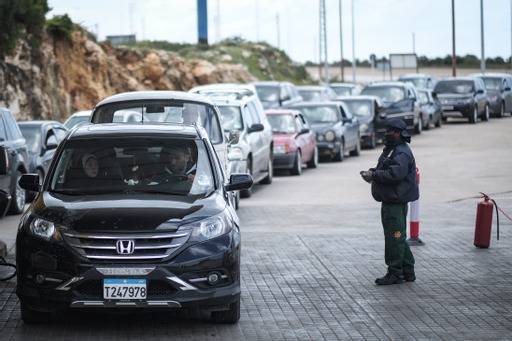 Lebanon’s caretaker energy minister agreed with his Egyptian, Syrian and Jordanian counterparts yesterday on a road map for securing Egyptian natural gas in a bid to alleviate the country’s electricity crisis. Raymond Ghajar traveled to Amman to meet with the energy leaders of other Arab countries and discuss a work plan for transporting natural gas via the Arab Gas Pipeline, which runs from the Sinai Peninsula in Egypt through Jordan, Syria and Lebanon. In a news conference after the meeting, Ghajar said he hopes the project will acquire enough natural gas to generate 450 megawatts of electricity, adding that Lebanon is working with the World Bank to secure funding for it. Apart from funding, the proposal faces the obstacle of US sanctions on Syria, although the US has thrown its backing behind the plan and could grant an exemption, as well as potential repairs needed to the pipeline. The ministers also said they are working to start the plan — which was announced by the US ambassador to Lebanon shortly after Hezbollah said Iran would be delivering fuel to Lebanon — as soon as possible.

Mayhem overtook gas stations on Wednesday, with longer queues and protests at the pumps as a total end to fuel subsidies seems imminent. On Tuesday, Georges Brax, a spokesperson for the gas station owners syndicate, said fuel subsidies would be lifted “within days.” The next day, people rushed to fill their tanks with gasoline, and taxi drivers blocked the roads leading to Nejmeh Square in Saida. Residents in Saadnayel and other Bekaa Valley areas also closed main roads in protest, L’Orient-Le Jour reported. The anticipated end to fuel subsidies has raised fears that the price of 20 liters of gas could shoot up to as much as LL350,000 in the coming days; the official price is currently set at LL126,400. However, in many cases, fuel consumers had already been paying unsubsidized prices on the black market, while the Energy Ministry had took a step toward de facto removing subsidies last month with a decree allowing businesses to import unsubsidized diesel using fresh dollars. The General Directorate of Oil in a new decree effective yesterday set the price of unsubsidized diesel at $540 per ton, adding that "anyone who wishes to benefit from purchasing unsubsidized [diesel] can benefit from this decree."

The food importers syndicate has warned that work interruptions at the Beirut port due to a strike* may portend food disaster and financial losses for the private sector. The syndicate issued a statement yesterday noting that the cessation of work at the port is keeping imported foodstuffs for additional time in warehouses and delaying their delivery to the market, and demanding officials reopen export and import channels so that food arrives to supermarkets on time. Importers also called on port officials to stop imposing storage fees — paid in dollars — noting that the delays in moving the goods are “due to force majeure circumstances related to the disruption of the work of the port and not as a result of the delay of importers or exporters in completing their transactions.” Equipment operators at the port container terminal have been striking since the beginning of the month, while truck drivers have threatened to announce an open strike since the beginning of the month. A spokesperson for the drivers told L’Orient Today they were protesting the devaluation of their salaries, adding that truck owners had set a deadline of today for their demands to be met and that they would mount an open-ended strike if they are not.

Amid backlash, the head of Lebanese General Security has said his agency will not deport six Syrian men who were arrested outside their country’s embassy and have been under a deportation order for illegally entering Lebanon. The detainees’ lawyer filed a motion Monday before Court of Cassation Public Prosecutor Ghassan Oueidat to reverse a deportation order for the men, arguing that sending them back to Syria would put them at “risk of beatings, torture and death” and would violate Lebanon’s commitments under the UN Convention Against Torture. The six men, some of whom are opposition activists from Daraa, were arrested on two separate occasions in front of the Syrian Embassy near Beirut last month under murky circumstances, and since then General Security has ordered that they either had to leave for a third country or face deportation to Syria. However, the men’s attorney said their passports were being held at the Syrian Embassy, preventing them from traveling. The case drew the ire of human rights groups and intervention by the UN refugee agency, which said in a statement that there should be an independent judicial or administrative review of deportation orders “before a decision on deportation is taken, to ensure that no refugee in need of international protection is deported.” Late yesterday, General Security chief Abbas Ibrahim told AFP that his agency would not deport the detainees and would “work to regularize their legal status.”

A women’s group is organizing a protest in Beirut’s Ain al-Tineh area at 5 p.m. today to call for justice in the 2020 Beirut port explosion case. Social media reports indicate that the protesters are calling on Parliament Speaker Nabih Berri, whose residence is in Ain al-Tineh, to support lifting immunity for officials implicated in the port explosion probe. Judge Tarek Bitar, the lead investigator into the 2020 port explosion, has requested that Parliament lift immunity from former ministers and sitting MPs Ghazi Zeaiter, Ali Hassan Khalil and Nohad Machnouk, which could pave the way for him to question them and possibly even file charges against them. However, Parliament has so far not granted the request, stymieing progress in the investigation. Yesterday, Bitar interrogated the former head of army intelligence, Camille Daher; the former customs director Moussa Hazimeh did not appear at his scheduled interrogation. On a previous occasion when families of port blast victims protested in Ain al-Tineh, they were attacked by men weilding sticks who allegedly accused them of cursing Berri.

*The Morning Brief has been corrected to more accurately describe the causes of the work interruptions at the Beirut port.

Want to get the Morning Brief by email? Click here to sign up.Lebanon’s caretaker energy minister agreed with his Egyptian, Syrian and Jordanian counterparts yesterday on a road map for securing Egyptian natural gas in a bid to alleviate the country’s electricity crisis. Raymond Ghajar traveled to Amman to meet with the energy leaders of other Arab countries and discuss a work plan for...