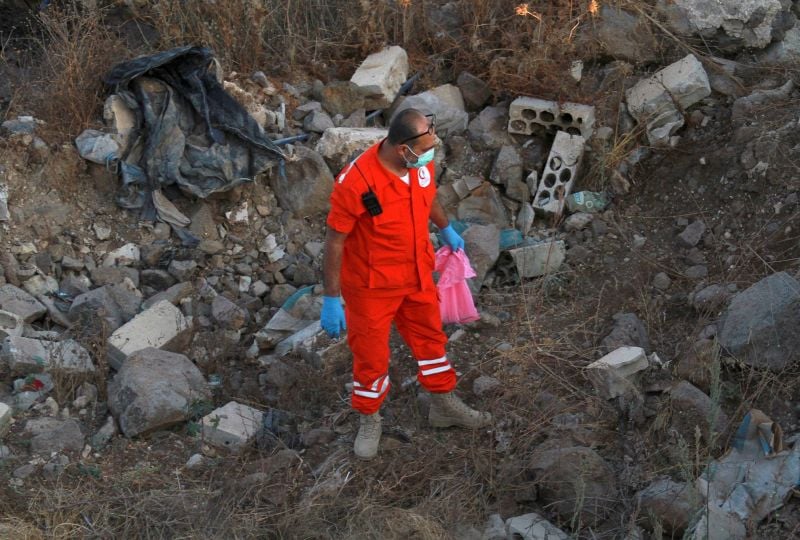 A member of a relief team inspects the site of a fuel tank explosion in Akkar. (Credit: Omar Ibrahim/Reuters)

BEIRUT — The death toll from a tragic warehouse explosion in Akkar over the weekend rose on Monday as officials and health care personnel continued grappling with the tragedy’s aftermath.

At least 33 people killed in the explosion have been identified, while at least 80 were injured, Joseph Helou, who heads the Health Ministry’s medical care directorate, told L’Orient Today.

Meanwhile, seven people who went missing during the explosion have still not been located.

“We are still trying to identify body parts of many corpses, using the DNA testing at the Akkar governmental hospital,” George Kettaneh of the Lebanese Red Cross told L’Orient Today.

On Sunday night, several wounded soldiers were transported to Turkey for treatment for burns and other injuries, according to the Health Ministry. Kuwait has also sent a plane to evacuate a handful of severely injured people, caretaker Health Minister Hamad Hassan has announced.

A couple of those patients were referred by Lebanese Hospital Geitawi, which received 15 patients following the explosion — even though, like most hospitals across the country, it was already close to buckling under the pressure of the recent surge in COVID-19 cases amid drug and medicine shortages caused by the recent end to fuel subsidies.

“Two people were fully treated and went back home, one was among the ones sent to Turkey, and we are now left with 12 patients, including five whom we are unable to treat because of the severity of their burn, and we believe the Health Ministry will help us treat them or send them to get a treatment abroad,” Sister Hadia Abi Chebli, a co-director of the hospital, told L’Orient Today.

Around 2 a.m. on Sunday morning, a fuel tanker holding some 60,000 liters of gasoline and 40,000 liters of diesel exploded in the village of Tleil as the Lebanese Army was distributing fuel that had been confiscated from smugglers to residents. Rumors circulated the fuel had been ignited by gunshots or by a carelessly lit lighter flame, though the official cause is as yet undetermined. The owner of the land where the tanker was located and his son were brought in for investigations; a statement from the family has denied their having anything to do with the tanker.

Politicians quickly seized on the opportunity to trade blame for the explosion, which has been widely seen as the climax of state corruption and the government’s mismanagement of the fuel sector. Fuel shortages have led to long queues at gas stations in recent months, leading to desperation at pumps, many of which are bone dry. The historically marginalized northern region of Akkar, where Tleil is situated, has been hit particularly hard by the shortages of recent months.

Near the end of June, the government gradually began ending fuel subsidies in what it said was an effort to curb smuggling to Syria and make fuel more widely available. Last week, Banque du Liban recently announced its decision to end the subsidy program altogether. However, the state’s promise remains unfulfilled, leaving private motorists to fend for themselves in a country where even the informal network of shared cars, vans and buses that provide intercity transit have run out of gas.

According to our sister publication, L’Orient-Le Jour, a calm, sad atmosphere prevailed in Tleil on Monday. The army had established a security barrier around the site of the explosion pending further investigations.

Most of the families who were able to identify the bodies of the deceased said they were waiting to organize the funerals, as other families are still searching for their relatives. Some of those families’ loved ones may eventually be identified through DNA testing.

On Sunday evening, protesters stormed the Beirut house of Akkar MP Tarek Merehbi (Future/Akkar), blaming him for the country’s nightmarish state, while another group attempted to storm Premier-designate Najib Mikati’s residence. Mikati, Lebanon’s new billionaire premier, hails from northern Tripoli, which borders Akkar and is the poorest city on the Mediterranean basin.

Following the incidents, the Internal Security Forces said they would arrest any person who “assaults the sanctity of houses,” and detained William Noun, the brother of a victim of the 2020 Beirut port explosion, whose first anniversary took place earlier this month. He was later released from custody. At least three people are being detained for allegedly storming Merhebi’s house; a fourth detainee was released.

According to a lawyer for the Lawyers’ Committee for the Defense of Protesters, Merhebi has sued “unknown” people for stealing $13,000, credit cards, a hard drive and jewelry from his house.

BEIRUT — The death toll from a tragic warehouse explosion in Akkar over the weekend rose on Monday as officials and health care personnel continued grappling with the tragedy’s aftermath.At least 33 people killed in the explosion have been identified, while at least 80 were injured, Joseph Helou, who heads the Health Ministry’s medical care directorate, told L’Orient Today. Meanwhile,...