‘I work in hell’: Public transit workers and riders live at the mercy of BDL’s fuel subsidy decisions 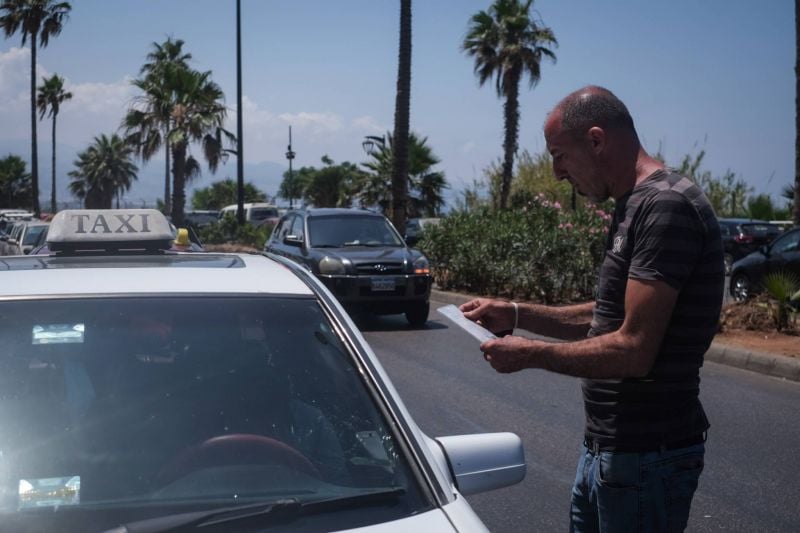 A man checks the credentials of a taxi driver before allowing him to fill up his tank at a gas station reserved for public transport vehicles in Beirut in June. (Credit: João Sousa/L’Orient Today)

BEIRUT — “I work in hell,” said Abou Kareem, who shuttles an old and dented Honda with a broken air conditioner around Beirut every day.

The 50-year-old taxi driver does not make enough money to buy all the food he needs for his household, so fixing his car’s air conditioning is not an option during an unprecedented economic crisis. Instead, he would simply sweat his way through the hourslong gas station lines.

In the two days since Banque du Liban announced it would stop subsidizing fuel imports, he has been struggling to find stations that are filling up at all.

“Taxi drivers’ living conditions are poor beyond imagination and will get poorer soon,” he said.

The central bank’s announcement on Wednesday that it will no longer use its remaining stock of foreign currency to subsidize fuel imports has thrown the public transportation sector into chaos.

Following the announcement, and amid political wrangling and attempts to get BDL to walk it back, the Energy Ministry has held off on issuing new fuel prices. The uncertainty has driven the majority of gas stations to close, while long queues have formed in front of the few that are operating.

Meanwhile, the drivers and riders who depend on Lebanon’s “public” transportation system — which is, for the most part, neither publicly run nor publicly funded but a decentralized and largely privatized system of individual drivers of shared taxis, known as services, along with a network of private van and bus lines — have been left to cope with the new system without assistance.

Shadi al-Sayed, the head of the bus and van drivers syndicate in the north, told L’Orient Today that drivers in the area were not working at all on Friday, as gas stations in the area were entirely closed. He accused importers of hoarding gasoline, and as a result, he said, “there are people who are walking [on the highway], because there is no gasoline.”

Importers are pointing the finger at the central bank for the shortages, saying they would not deliver gas to stations until the central bank honors invoices for imports that arrived to Lebanon before BDL announced it would halt subsidies.

The normally bustling Cola bus station in Beirut was eerily quiet on Friday afternoon, with only two buses along with perhaps a dozen vans and taxis waiting to fill up.

Saed, a van driver who makes the run between Beirut and Chtoura, told L’Orient Today that he is buying fuel from the black market because every time he attempts to fill his tank, he fails to find a gas station operating.

“I am spending more than LL300,000 on a [20-liter] tank of gasoline,” he said, explaining that he can’t waste two hours of his working day searching for an open gas station or waiting in a queue when he runs out of gas.

Before the economic crisis drained the country of fuel, the price of a shared taxi ride was LL2,000. The fee was then increased, first to LL3,000, then to LL4,000, and then informally to LL8,000 a month ago when shortages persisted and gasoline prices spiked following the government’s decision to partially end fuel subsidies.

Yesterday, many service drivers started charging LL20,000-LL30,000 following the BDL decision to fully halt the subsidies. The decision could cause fuel prices to increase as much as fivefold, as importers will have to pay for fuel at the parallel market rate, which currently stands at more than LL20,000 to the dollar. All the while, the monthly minimum wage has stagnated at LL675,000 — which now has a market value of less than $40.

Given the rising prices, a Saida resident who commutes from her hometown to her work in Beirut by public transportation every day told L’Orient Today that she had asked her employer to allow her to work from home for half the week.

“My salary is not enough to cover transportation expenses anymore,” she said.

Meanwhile, for drivers the fuel crunch has meant putting in longer hours to make ends meet.

A taxi driver who declined to give his name told L’Orient Today that he wakes up at 5 a.m. to be the first in the queue at a gas station near home, which opens at 7 a.m. He added that his brother, who also works as a taxi driver, drives 17 km from his house to fill his car at his brother-in-law’s gas station every day.

Khalil Daher, another taxi driver, said he is struggling to make a living.

“What we earn daily does not allow us to buy more than bread and some vegetables,” he said. “Maybe sitting at home and waiting for the crisis to pass is better for us than waiting in long queues and buying fuel on the black market.”

The core issue facing drivers in Lebanon, which predates the current crisis, is the lack of support the shared transportation sector gets from the government, said Chadi Faraj, a co-founder of the NGO Riders Rights, which advocates for public transportation drivers and riders. The issue of fuel shortages has only compounded that problem, he said.

Riders Rights has called for the government to target fuel subsidies to public transportation drivers rather than paying across-the-board subsidies for fuel. Faraj said activists have also been trying to persuade municipalities to support the bus and van lines to make sure they keep operating at a price riders can afford.

“We need to work to make sure that there will still be at least a few [bus and van] lines running that can serve people in a way that’s somewhat fair and to support the people and the [transport] lines so that there will continue to be transportation between the cities and outlying areas,” he said.

Without assistance, Faraj said, the sector is headed for “two collapses”: one for the drivers and one for the riders who depend on them.

Yazan Mansour, a van driver, said officials should expedite the issuance of a ration card to assist vulnerable families and a card for the transport sector that provides gasoline at the cheapest cost.

He called on the Energy Ministry to “allocate necessary quantities of gasoline for the public transportation sector, and identify stations across the country to exclusively fill taxis’ tanks.”

Otherwise, drivers said, the decision to lift fuel subsidies is a death sentence for taxi, vans and bus drivers.

But drivers, riders and advocates looking for assistance may be hard pressed to find it from Lebanon’s government. Back in June, as the government began preparing for the end to fuel subsidies, caretaker Energy Minister Raymond Ghajar said, “We have to get used to and be convinced that this subsidy that we benefited from for a year or a year and a half .... will end,” and that “those who can't pay [LL200,000] ... for a tank should stop using a car and use something else,” Ghajar said.

Meanwhile, it remains to be seen whether riders will be able to bear the costs of public transportation in a fuel market without price controls.

Now some are already reconsidering even those secondary options.

“I think I might buy an electric scooter instead of ordering fares from now on,” said 30-year-old Talia Nasr, who currently commutes via public transportation. “Or maybe a bicycle, since we rarely have electricity to charge anything.”

BEIRUT — “I work in hell,” said Abou Kareem, who shuttles an old and dented Honda with a broken air conditioner around Beirut every day.The 50-year-old taxi driver does not make enough money to buy all the food he needs for his household, so fixing his car’s air conditioning is not an option during an unprecedented economic crisis. Instead, he would simply sweat his way through the...