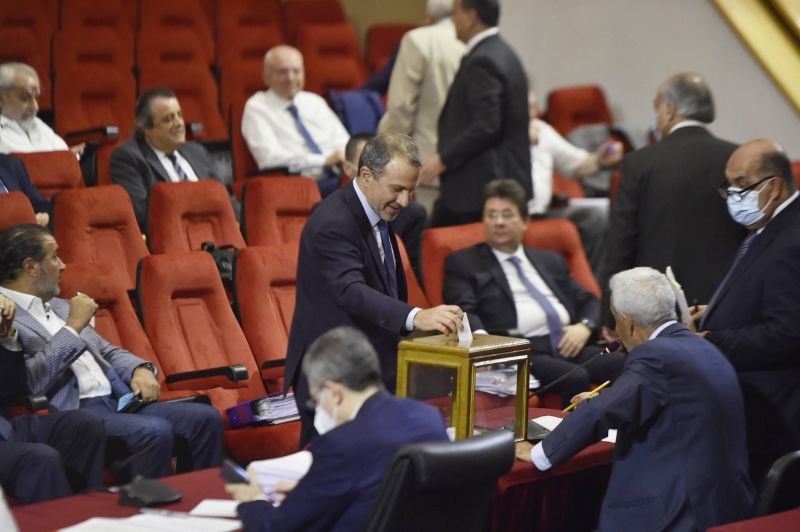 FPM leader and MP Gebran Bassil casts a vote in the Constitutional Council election ahead of the general session of Parliament on Wednesday. (Credit: Hassan Ibrahim)

With the air conditioning system down at UNESCO Palace, MPs were seen fanning themselves and removing their jackets or ties as the session progressed. Adding to the discomfort, MPs appeared confused as they scrambled through an agenda of which multiple divergent versions had been circulated.

The legislature endorsed the $556 million “exceptional credit” law to fund ration cards in an effort to provide a cushion to help Lebanese families who are suffering financially as the central bank gradually ends subsidies.

The one-year ration card will be offered to half a million families with each family receiving $93 per month, on average, but funding for the program — and who qualifies — has not been decided.

“The mechanisms and how the payment process will go remain the responsibility of the government,” Parliament Speaker Nabih Berri said during the discussion of the ration card law.

Berri added that he has received a letter from outgoing Prime Minister Hassan Diab indicating that the caretaker government will begin implementing all the necessary measures, once the law is approved.

At the beginning of the session, caretaker Finance Minister Ghazi Wazni said the scheme had two potential sources of funding. One of them is through the International Monetary Fund, which informed him earlier today it is considering allocating some $900 million to Lebanon as part of a larger proposal to allocate some $650 billion worth of “special drawing rights” to boost the foreign currency reserves of member states.

The second potential funding source is a reallocation of $300 million from the World Bank that was initially meant for public transport projects.

An initial proposal drafted by the caretaker government was designed to cover 750,000 families. At parliamentary committee level, MPs revised it to exclude those who may benefit from existing international aid programs, such as the National Poverty Targeting Program, which has funding from international donors to provide cash support to 70,000 households with a base payment of LL200,000 per family and then LL100,000 per family member, up to a maximum of six members per family.

Progressive Socialist Party member Hadi Aboul Hosn said that while his bloc was in favor of the card, it was against using people’s money to fund it. Aboul Hosn insisted that the law “must not become one of those laws that are passed but not implemented. We are in a situation that can no longer continue.”

Free Patriotic Movement leader Gebran Bassil, who contributed to drafting the ration card proposal, praised the law as “a step forward,” but said it is only a partial solution to the crisis and needs to be accompanied by “a complete reform plan.”

News of the ration card law passing was met with skepticism on social media, as political figures and analysts questioned the viability of its funding and the lack of provisions in the law to ensure transparency in the cards’ distribution.

Head of Lebanese Forces’ foreign relations apparatus and former social affairs minister Richard Kouyoumjian appraised the law as nothing more than a “big lie to numb the people,” expressing doubt in the state’s ability to secure external funding for the scheme. Kouyoumjian said that the program will inevitably need to use funds from the central bank’s mandatory foreign currency reserves, which, he noted, belong to the Lebanese people.

Highlighting that law leaves the details of the ration card rollout to the caretaker cabinet, finance commentator Mike Azar cautioned in a tweet that if it is “funded and executed in an unsustainable way, it will be inflationary and will be used as a simple vote buying scheme.”

Wadih Khazen, dean of the Maronite Council and a former government minister, also said, in a statement, that he feared the card could “be used to bribe citizens as we approach parliamentary elections.”

Earlier in the session Wednesday, MPs elected Judge Michel Tarazi to replace Constitutional Council Judge Antoine Brady, who passed away in May. Brady’s death had reduced the number of judges on the court to seven, just below the eight needed for quorum. The court is composed of 10 seats, five filled by Parliament and five by the cabinet; Brady was part of the Parliament’s share of judges.

Tarazi is the former president of the fifth chamber of the Court of Cassation. He won the election with votes from 52 MPs, beating out former Justice Minister Albert Serhan, a member of the government that fell in the wake of the Oct. 17, 2019, uprising.

Ahead of the vote, MP Ousama Saad complained that the MPs had not been informed about the election in advance, and therefore, had not been able to go review the two candidates’ CVs.

Since Brady’s death, the court has been unable to meet, notably affecting a case regarding a treasury advance to buy fuel for the state electricity company as hourslong blackouts afflict the country.

The two remaining vacant seats cannot be filled until a new government is formed.

Just before its afternoon recess, Parliament also approved a public procurement law based on recommendations from the Organization for Economic Cooperation and Development to improve transparency and establish an independent body to oversee the purchase of goods by government and state-owned enterprises.

MPs began the evening session — with the AC now reportedly but not noticeably operational — by sending several draft laws marked as “urgent” back to parliamentary committees for further discussion, with Berri saying “financial laws should not be considered urgent.”

Among these laws were a proposal to reform tax exemptions for religious institutions and officials and a proposal to exempt emergency vehicles from license and traffic fees.

Before closing the session, Parliament barrelled through a raft of draft laws, approving among them an urgent draft law exempting those affected by the Beirut port blast from legal and judicial fees on lawsuits related to the explosion.

Parliament completed its more than 70-item agenda in just one session, despite having originally scheduled two days to make its way through the list.

Correction: This article’s headline initially stated that vulnerable families would receive an average of $93 per year under the ration card law approved by Parliament. In fact, they will receive $93 per month.

BEIRUT — MPs passed a law creating a controversial ration card program for Lebanon’s poorest families and elected a new member to Lebanon’s Constitutional Council during a lengthy and sweltering Parliament session Wednesday.With the air conditioning system down at UNESCO Palace, MPs were seen fanning themselves and removing their jackets or ties as the session progressed. Adding to the...