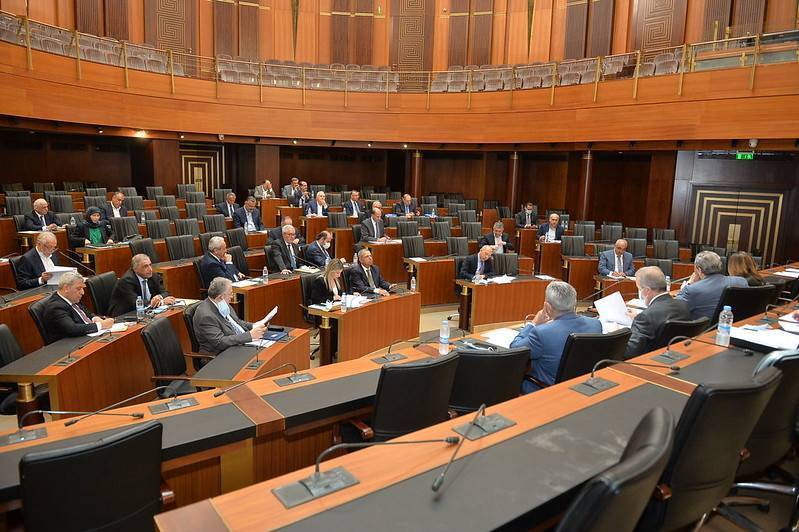 BEIRUT — Parliamentarians will convene on Wednesday to vote on a $556 million “exceptional credit” law that will fund ration cards to replace the current subsidies scheme. But the vote is taking place with no clear funding plan or disbursement mechanism in place for the card.

The proposed “urgent law,” of which L’Orient Today has obtained a copy, aims to replace subsidies on essential imports — which benefit the whole population regardless of their financial wellbeing — with direct money transfers delivered via electronic cards to the country’s poorest households.

With more than half the population now living under the poverty line, the proposal aims to provide a cushion to impoverished Lebanese families as the central bank gradually lifts subsidies.

However, the proposal’s motives have come under fire.

MP Mohammad Hajjar (Future/Chouf) lambasted it, dubbing the proposed ration card an “election card” due to its failure to adhere to international best practices, potentially leaving the cards’ allocation open to clientelistic abuse. “This is an election card, not a ration card,” Hajjar told L’Orient Today.

The proposal presently on the table emerged following the examination and merging of two earlier proposals: the first prepared by the caretaker government; the other submitted by the Free Patriotic Movement.

The proposed law does not specify who is eligible to receive the ration cards, the mechanism for their distribution or how they will be funded.

What does the law say — or not say?

Banque du Liban finances imports of wheat and medicine at the official LL1,507.5 peg to the US dollar, and it subsidizes fuel and foodstuff imports at the exchange rate of LL3,900. The exceptional credit law says that the state aims to replace these subsidies with US dollar transfers to 500,000 of the country’s most vulnerable families.

According to a parliamentary subcommittee report seen by L’Orient Today, implementation of the proposal would entail officials slashing the current subsidy payments made by BDL.

Medicine subsidies would drop by 54 percent, while subsidies on gasoline and diesel would decrease by 83 percent and 86 percent respectively. Subsidies on foodstuffs and household gas tanks would be eliminated completely. However, the proposal opts to increase subsidies on bread by 12 percent.

The report says that the program would cost the state about $1.2 billion per year, in addition to the $556 million in cash transfers that the exceptional credit law covers. In comparison, the current subsidies program costs about $5 billion annually.

Neither the law nor the subcommittee’s report mentions the state monopoly power provider Eléctricité du Liban’s fuel imports, which stand at about $1.5 billion per year. The central bank finances the state utility’s imports at the official exchange rate.

The law claims that cash transfers to ration card beneficiaries would offset the losses that result from removing subsidies.

Each family would receive up to $137 per month, the law says, leaving the minimum transfer per family, the allocation per family member and the criteria to become eligible for a card at the caretaker government’s discretion.

As per the law, the “criteria and mechanisms will be established by a joint decision from the finance minister, social affairs minister and the economy minister” after consulting “the relevant international authorities,” within a period of 15 days of enforcing the law. The law does not indicate who these relevant international authorities might be.

“It’s the ministers who have to decide the process,” MP Yassine Jaber (Amal bloc/Nabatieh), who led the subcommittee that developed the proposed law, told L’Orient Today. “We [MPs] gave them power and flexibility to specify the mechanism and who receives the funding,” he added.

“Lawmakers can approve the [exceptional] credit but the government needs to act [to implement it],” Jaber said.

Jaber highlighted that the cash transfer amounts would depend on each family’s monthly income, but the salary threshold for qualification remains unspecified. It will fall to Lebanon’s caretaker ministers to set these thresholds.

The law states that the dollars would be loaded onto an electronic card for spending. However, in a country that operates with four exchange rates, the law does not mention the rate at which those dollars would be set for products priced in lira. Most stores selling essential goods price their merchandise in lira.

Additionally, Jaber pointed out that many stores in poorer areas do not have access to the debit/credit card machines needed to process electronic payments.

“When you get into the integrity of the law, traps will start appearing,” Jaber told L’Orient Today.

Furthermore, according to the law, potential beneficiaries must lift banking secrecy on their accounts to access the program.

The initial proposal by the caretaker government was designed to cover 750,000 families, but MPs amended it to exclude those who may benefit from existing international aid programs. The FPM proposed this modification, according to a subcommittee report and Jaber.

Officials estimate that about 250,000 families will receive cash assistance from the ongoing National Poverty Targeting Program and a $246 million World Bank loan approved in January.

The NPTP program has funding from international donors to provide cash support to 70,000 households with a base payment of LL200,000 per family, as well as LL100,000 per family member, up to a maximum of six members per family; but to date, only about 45,000 of the families have been verified as eligible to receive the assistance.

Meanwhile, the approved $246 million World Bank loan that was originally intended to provide cash assistance for more than 140,000 families has been delayed until at least August, following a series of modifications by Lebanese officials that were made without first receiving the World Bank’s approval.

In addition, “those who benefit from BDL circular 158 would be disqualified from receiving the ration card,” Jaber said.

How will the proposed retargeting program be funded?

To fund the proposal, lawmakers have asked the World Bank to reallocate some $1 billion in undisbursed loans. However, to date the bank has not guaranteed any funding.

“There is a possibility to get funding from the World Bank’s unused loans [to Lebanon] that are worth $959 million,” Jaber said.

Since government officials have been thus far unable to lock down an agreement with international donors or contributors, the program will have to be financed by Banque du Liban, using its mandatory reserves, both Hajjar and Jaber told L’Orient Today.

“If there are positive vibes that the money will come from the World Bank, the finance minister would ask the central bank for a loan,” which would later be offset by the World Bank’s financing, Jaber said.

As the program’s guidelines remain mysterious, policymakers “should at least follow the World Bank standards for such programs before asking them for funding” Hajjar said.

For instance, the law does include the implementation of a national social registry — a program that verifies the eligible families and ensures that the most vulnerable are identified and prioritized. Additionally, the law does not mention oversight bodies, such as a third party monitor or external auditors.

“MPs do not want to follow these guidelines” as they want to use the cards as an “electoral tool,” Hajjar said.

With little chance of securing funding due to its failure to follow international best practices, such as the ones set by the World Bank social safety net project, it is possible that BDL would continue using its dwindling currency reserves “until the last penny” to partially subsidize imports and to cover the ration cards proposal, Hajjar cautioned.

If Parliament passes the law, it would be implemented for a period of one year. It does not specify whether or how payments should continue beyond that point.

BEIRUT — Parliamentarians will convene on Wednesday to vote on a $556 million “exceptional credit” law that will fund ration cards to replace the current subsidies scheme. But the vote is taking place with no clear funding plan or disbursement mechanism in place for the card. The proposed “urgent law,” of which L’Orient Today has obtained a copy, aims to replace subsidies on...