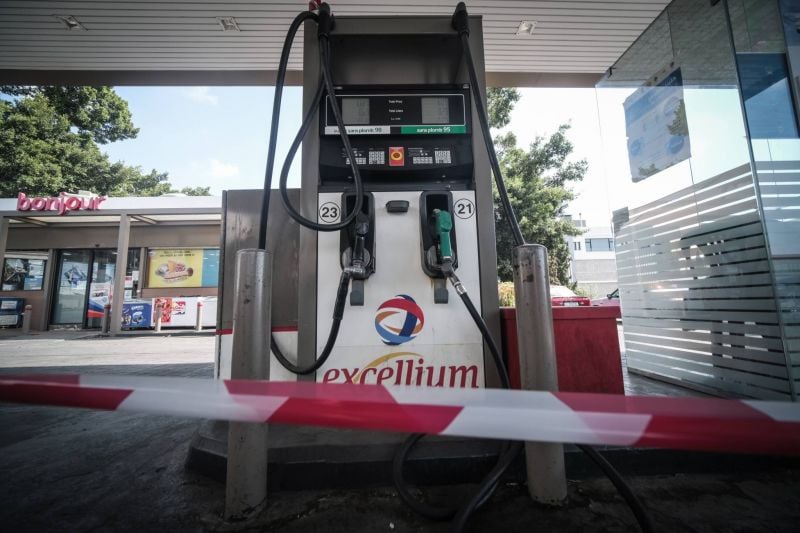 Gas stations have cordoned off some of their pumps or closed down in recent weeks as fuel shortages have become the norm. (Credit: João Sousa/L’Orient Today)

BEIRUT — Residents should expect to shell out at least 30 to 45 percent more for gasoline and diesel after caretaker Prime Minister Hassan Diab gave his “exceptional approval” for fuel imports to be financed at an exchange rate of LL3,900 to the US dollar instead of the official, LL1,507.5 peg.

The policy change, announced in a statement from Diab’s office on Thursday, aims to secure fuel for the next three months in order to ease fuel shortages and boost tourism, particularly among Lebanese expatriates. By bolstering the tourism industry — which in past years has accounted for about a fifth of the country’s GDP — the decision could help to bring in hard currency for a country experiencing an acute liquidity crisis.

But even as the change could help to prop up tourism during the crucial summer months, it may have dire consequences for residents whose salaries and savings are in the local currency and whose access to dollars is limited.

“Of course I am going to lessen how much I drive after such a decision,” a 59-year-old businessman named Mohamad Ghalayini told L’Orient Today while waiting in line at a gas station.

Diala Asaad, a 57-year-old restaurant owner, who was in line at the same station, said, "We give up, we don't know what to expect anymore."

Although Diab’s announcement did not indicate fuel price changes, caretaker Energy Minister Raymond Ghajar, who first suggested that the central bank shift to fully subsidizing fuel at a rate of LL3,900 to the dollar, said such a change would cause prices to jump up to about LL65,000 for 20 liters of fuel. He did not specify which type of fuel he was referring to.

Fadi Abou Chakra, the head of the fuel distributors’ syndicate, told L’Orient Today that assuming tariffs and commissions are left unchanged, the price of 20 liters of 95-octane gasoline would reach about LL60,000.

The Energy Ministry has currently set the cost of 20 liters of 95-octane gas at LL45,200 and of diesel at LL33,300. A tank of household gas now costs LL28,400. The ministry typically updates its fuel price list every Wednesday.

Speaking with L’Orient Today, the head of the taxi drivers’ union, Marwan Fayyad, said the price hike is a “catastrophe to both public transport drivers and residents,” noting that fuel costs affect nearly every sector.

With the lira trading at record lows, Fayyad estimates that the set cost of the shared service taxi — many residents’ primary mode of transportation — would rise to LL7,000–LL8,000, from the current rate of LL4,000. The hike is due to soaring living expenses and car maintenance costs, which require hard currency, in addition to gas prices, Fayyad said.

Fayyad said that his syndicate had asked the caretaker government and Parliament's Public Works, Transportation, Energy and Water Committee to provide taxi, van and bus drivers with coupons that would allow them to daily buy some 30 liters of gasoline at a reduced price.

Since 2019, when Lebanon’s economy began bottoming out, Banque du Liban has provided dollars to fuel importers at the official exchange rate to cover 85–90 percent of the cost of imports. The remaining cost was paid for in dollars obtained at the parallel market rate, which now stands at a new record low of LL16,300 to the dollar.

However, BDL has allegedly been delaying payment of subsidized dollar invoices, leading to weekslong countrywide fuel shortages, wreaking havoc in multiple sectors of the economy and obstructing traffic on a daily basis as residents queue, sometimes for hours, at gas stations.

In addition to easing shortages, the new subsidy rate has a silver lining, at least according to Ghajar. As fuel becomes more expensive, fuel smuggling from Lebanon to Syria will decrease, he said.

But according to Jean Tawile, an economist and an adviser to former Economy Minister Alain Hakim, the new prices would not cut down on fuel smuggling but would only decrease smugglers’ profit margins.

“That’s not how you stop smuggling,” Tawile said, which he said will keep on happening “as long as fuel prices in Syria are significantly much higher than those in Lebanon.”

Gasoline now costs five times more in Syria than in Lebanon; even with the shift in subsidy payments, it would still be four times more expensive across the border.

To continue subsidizing fuel, BDL will keep on using its dwindling foreign currency reserves, which have reached a critical threshold: the mandatory reserves — currently equivalent to 14 percent of the dollar deposits commercial banks must place at BDL.

Those dollar loans would be able to be used to fund the current subsidy program, including fuel imports, Tawile said.

However, Tawile said the new subsidized price “does not solve the problem,” but puts inflationary pressure on most goods and services since fuel is used across the board, Tawile said.

BEIRUT — Residents should expect to shell out at least 30 to 45 percent more for gasoline and diesel after caretaker Prime Minister Hassan Diab gave his “exceptional approval” for fuel imports to be financed at an exchange rate of LL3,900 to the US dollar instead of the official, LL1,507.5 peg.The policy change, announced in a statement from Diab’s office on Thursday, aims to secure fuel...