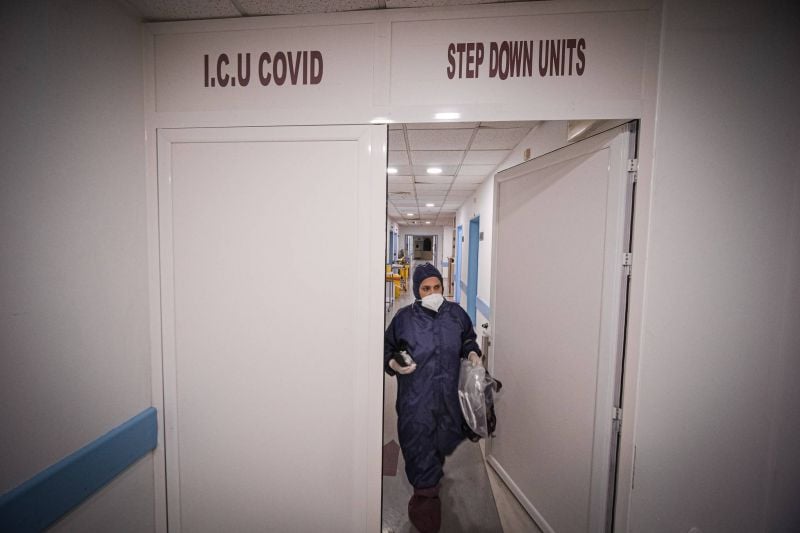 Amid the current electricity and drug shortages, the Delta variant is threatening to overwhelm Lebanon’s hospitals. (Credit: João Sousa/L’Orient Today)

BEIRUT — With COVID-19 cases again looking set to surge, driven by the new Delta variant, Lebanon’s beleaguered health sector is warning that hospitals may finally fold if overrun by another spike in cases amid the current fuel, medicine and medical equipment shortages.

“We are in a miserable state. We probably cannot function for more than two or three days,” Firass Abiad, who heads Rafik Hariri University Hospital, a local leader in responding to COVID-19, told L’Orient Today. “We are already overworking our staff and trying to come up with medicine alternatives.”

Hospitals in Lebanon have been scrambling to provide people with health care since the onset of the economic crisis, and COVID-19 has exacerbated the situation. At the turn of the new year, understaffed and underresourced hospitals and their intensive care units were inundated after cases surged when the government capitulated to private interest groups lobbying for the country to reopen the country for the holiday season. At one point the country registered upwards of 6,000 cases in a single day, and nearly 100 daily deaths.*

After a brief reprieve, cases are on the uptick again at a particularly dangerous time, bringing a new surge of patients to ICU units.

Just last month, cases were ranging from 300 to 500 a day; in early August Lebanon was registering more than 1,200 cases a day. On Wednesday, more than 2,500 new cases were recorded — the highest single-day number of new cases since April. Meanwhile, the number of people in intensive care has risen to 165, while it stood at 40 to 50 in July.

The head of Parliament’s Health Committee, MP Assem Araji (Future/Zahle), told L’Orient Today that although Lebanon is not experiencing the worst-case scenario in its health sector yet, it is heading there as many people continue to fail to abide by guidelines for social distancing and masking, while some are refusing to take the COVID-19 vaccination.

“If Lebanon will be hit by yet another wave of COVID infections, the health sector will be in a very difficult situation as there are a lot of medicines and medical equipment that are out of reach. This, coupled with the electricity cuts, will be a chaotic situation,” he said.

Lebanon’s medical practitioners and public officials have long warned that hospitals may not be able to provide patients with life-saving surgery and urgent medical care due to the government’s failure to reimburse private and public hospitals, which stems from the country’s increasingly dire financial crisis. These issues have now been compounded by increasing fuel and medication shortages.

Several hospitals are at risk of shutting down their generators due to lack of diesel, Sleiman Haroun, the head of the private hospitals syndicate, told L’Orient Today, asking officials to intervene immediately to save patients’ lives.

While hospitals have received some help from the Energy Ministry, the support was not enough, he said. “It is now a constant and an everyday struggle for us and every hospital owner to obtain fuel on the black market,” Haroun said.

“Many patients need oxygen concentrators, which rely on electricity. These patients are facing a big risk now with the hospitals’ power cuts,” Abiad said, “and we are not able to provide them with any alternative.”

Meanwhile, the country appears unlikely to reach herd immunity in time to avoid another surge, although vaccination rates have been picking up.

Twenty-five weeks into the COVID-19 vaccine rollout in Lebanon, just 21.6 percent of the adult population is fully vaccinated, with only about 5 percent more having received at least one vaccine dose. Only 32.9 percent of Lebanese have registered for the vaccine.

According to Abiad, the vaccination campaign was slow at first, but many people now feel encouraged to take the vaccine. “At least this one aspect is working to our advantage,” he said.

Araji said in January that the expectations for the original vaccination plan would be that by the end of this year, 80 percent of the population would be vaccinated, and thus Lebanon would be able to reach herd immunity.

The country seems unlikely to meet that target. Meanwhile, the likely return of students to in-person learning adds another wild card to the COVID-19 situation, particularly given that for the most part, children have not yet been vaccinated.

The Health Ministry announced on Wednesday that people aged 24–29 who by July 31 had registered to take a COVID-19 vaccine will start receiving appointments, and noted that children aged 12 and up can now register on the government-run Impact platform to reserve their spots for vaccination at a later date.

Abiad told L’Orient Today that at this point, the priority is for adults, especially the elderly, to be vaccinated before the country moves to inoculating children, and potentially introducing a third dose to provide greater protection against the Delta variant.

“We need at least the majority of the population to get vaccinated first,” he said.

While the confluence of fuel shortages and COVID-19 present a particularly dangerous situation, human rights groups and medical workers have been warning of Lebanon’s crisis endangering the health sector since late 2019.

“We have been calling on the government to make every effort to use the resources at its disposal to meet its minimum obligations under international law and reverse the erosion of Lebanese peoples’ access to adequate health services,” Aya Majzoub, a Lebanon researcher for Human Rights Watch, told L’Orient Today.

“Many reasons cause the collapse of the health sector in Lebanon — the lack of responsiveness by the state and its inability to respond to the crisis,” Majzoub added.

*CORRECTION: Due to an editing error, this article previously misstated the number of daily new COVID-19 cases and coronavirus-related deaths recorded in Lebanon at their peak.

BEIRUT — With COVID-19 cases again looking set to surge, driven by the new Delta variant, Lebanon’s beleaguered health sector is warning that hospitals may finally fold if overrun by another spike in cases amid the current fuel, medicine and medical equipment shortages.“We are in a miserable state. We probably cannot function for more than two or three days,” Firass Abiad, who heads...