Eleven months after the Beirut port blast, Lebanon’s president has yet to officially meet with victims’ families 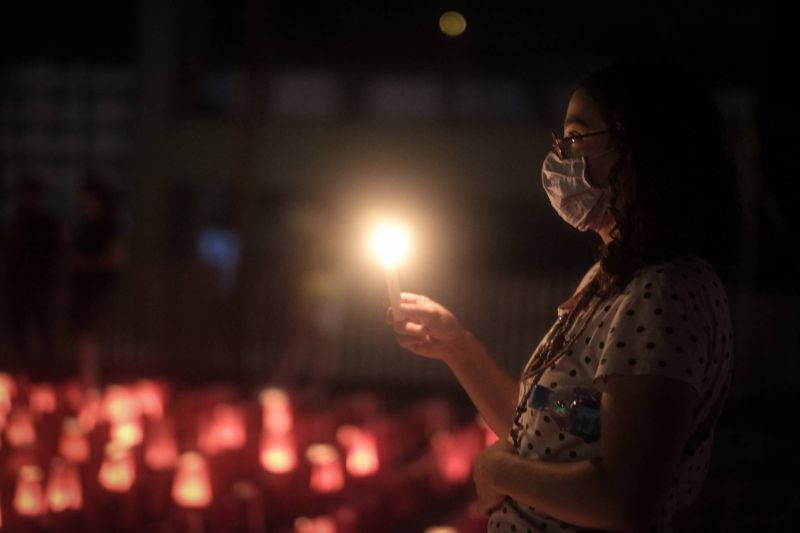 A mourner holds a candle at a vigil in the aftermath of the Beirut port explosion. (Credit: João Sousa/L’Orient Today)

BEIRUT — Eleven months after one of the biggest non-nuclear explosions in recorded history, President Michel Aoun has not officially met with the families of those killed by the Beirut port blast — and many of those families are in no hurry to meet with the head of state, either.

Lebanon’s other highest-ranking officials, Parliament Speaker Nabih Berri and caretaker Prime Minister Hassan Diab, have both met with the families of the victims. Diab, who resigned six days after the explosion, recently announced that he had signed a draft decree establishing Aug. 4 as a day of national mourning.

Aoun’s office has denied claims that he has avoided meeting with the families of those killed in the explosion.

A source at the Presidential Palace acknowledged that Aoun had not officially met with a delegation of the families, but told L’Orient Today that no meeting took place due to differing schedules, adding that “the president had done everything he can for the victims of the families and he has used his authorities to order the spending of the repair of the damage from the explosion.”

“The president did meet some of the victims’ families, but not with the official delegation,” the source added. When asked which families, he said he could not recall.

Ibrahim Hoteit, a representative of the committee of victims’ families, told L’Orient Today that the families had requested a meeting with the president to demand he sign a law bestowing on victims the same status as soldiers killed in the line of duty, but the president declined because of the coronavirus pandemic. “Nevertheless, we thank him for signing the law, for this was the point of meeting him,” he added.

The presidential source said the meeting had not taken place because of scheduling issues, not due to COVID-19 concerns.

Hoteit said he was not aware of Aoun having met individually with any of the victims’ family members, although he could not rule out the possibility that unofficial meetings might have taken place.

He added that, in general, the families would not meet with politicians unless they had a specific demand, as was the case with Berri and Diab. “For us, all the politicians who were in power from the period the ammonium nitrate entered Lebanon for seven years are guilty until proven innocent,” Hoteit said. “This includes heads of state, heads of security, governments with their ministers, as well as judges.”

Mehydine Ladkani, the son of Mohamad Ladkani, who died after he was in a coma for 31 days from injuries sustained in the port blast, told L’Orient Today that while the families were not eager to “meet a politician who might turn out to be a contributor in the killings of our families,” the fact that Aoun had backed out of meeting with the victims’ families felt like an insult, particularly since non-Lebanese politicians like French President Emmanuel Macron had done so.

“Truth to be told, within such a huge incident, the fact that he didn’t meet with us because of corona when heads of states expressed their condolences and walked with the people is a very humiliating thing for the presidency,” he said.

However, the family members told L’Orient Today that their main concern was not how Aoun and other Lebanese officials had dealt with them after the blast, but how they had failed to prevent it in the first place.

“We were betrayed, thinking that our children were safe, not realizing that our port had ammonium nitrate which a lot of politicians knew about,” said Majid El Helo, the father of 26-year-old Nicole El Helo, who was in the Mar Mikhael area and died in the explosion.

“We all know the president knew about it, and he should have used his authority to solve the situation — but he didn’t,” he added, referring to Aoun’s own admission that he knew about the presence of ammonium nitrate at the port prior to the blast.

On Friday, port investigator Tarek Bitar requested permission to prosecute top officials over the disaster. A similar move got his predecessor Fadi Sawwan fired; the country’s highest appeals court removed Sawwan from the case in February, citing, in part, his pursuit of charges against public figures who are granted immunity from prosecution in their official roles.

BEIRUT — Eleven months after one of the biggest non-nuclear explosions in recorded history, President Michel Aoun has not officially met with the families of those killed by the Beirut port blast — and many of those families are in no hurry to meet with the head of state, either.Lebanon’s other highest-ranking officials, Parliament Speaker Nabih Berri and caretaker Prime Minister Hassan...