Another shot in Lebanon for Bashar al-Assad?

The shadow of the Syrian regime hung over the land of the cedars once. Can Syria regain a foothold in Lebanon? 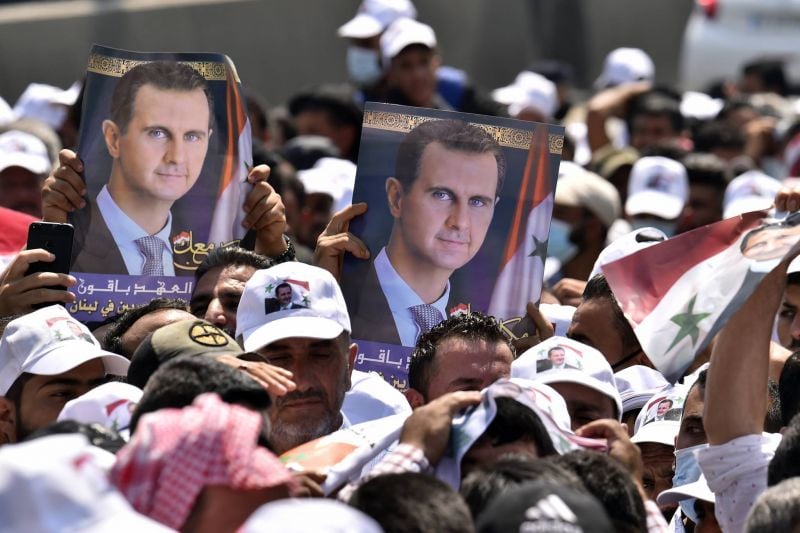 Syrians in Lebanon went to the polls last week for their country’s presidential election in convoys of vehicles bearing paraphernalia supporting President Bashar al-Assad. The scene brought back to the minds of Lebanese the demons of the past, and rekindled what for some is the worst fear — of the Syrian regime’s return to Lebanon.

The Syrian government’s military victory — made possible by Russian and Iranian intervention, but also by rapprochement with Arab countries, notably Saudi Arabia — triggered a string of theories of the Syrian regime’s possible return in Lebanon.

Yet this scenario appears unlikely today. Why?

The Syrian government is barely managing to control the areas it recaptured and does not seem to have the means to immediately regain a foothold in Lebanon — something the West, which continues to view Assad as an outcast, would be very unlikely to accept.

Within Lebanon, the political scene has changed, and it has become more challenging for the regime to forge ties with its former allies.

Iran-sponsored Hezbollah is today much more influential in the country than it was back in 2005, when the Syrian Armed Forces withdrew from Lebanon, to the point that the balance of power has somehow shifted between Damascus and the Shiite party.

In other words, Iran, through Hezbollah, has the means to block any attempt by the Syrian regime to gain a foothold in the country.

And while Hezbollah fought alongside the Syrian government and helped save it at a point in the war, opinions differ within the Shiite party as to the need to once again allow Syrians to hold sway on this side of the border.

Some believe that it is now Hezbollah’s turn to play the decisive role in Lebanon’s geopolitical issues, while others argue that allowing minimal Syrian influence within the country would strengthen the Shiite party’s position within the self-proclaimed axis of resistance.

According to this second camp, Syria could have a foothold in Lebanon in return for a more powerful presence of Hezbollah in Syria.

As for Parliament Speaker Nabih Berri, formerly Syria’s strongest ally in Lebanon, Damascus can no longer really rely on him.

Since the outbreak of the Syrian war, Berri has distanced itself from his former political patron. While a source close to the Parliament head affirmed that the relations between the two are in good shape, Berri did not mention Syria in the sections of his recently released memoirs covering 2011 to the present day.

The Amal Movement’s leader has not visited Syria once in the past decade.

According to information obtained by L’Orient-Le Jour, Assad personally interfered with Hezbollah in Lebanon’s 2018 parliamentary elections to guarantee the election of Jamil al-Sayyed, seen as Damascus’ henchman and Berri’s rival as MP for the Bekaa.

The Syrian regime has always sought to maintain key relations with Shiite figures who occupy or may occupy strategic positions, such as Sayyed and Major General Abbas Ibrahim, the director-general of General Security.

Syria’s influence in Lebanon was based mainly on its ability to forge close ties with each and every community in the country, notably after the Taif Agreement, which ended the 1975–90 civil war in Lebanon.

The deal, which granted legitimacy to the Syrian occupation of the country, allowed Damascus to strengthen its relations with many Christian and Sunni figures.

Assef Shawkat, the former head of the Syrian intelligence services and Assad’s brother-in-law, used to tell a Lebanese politician he often met that Syria was seeking to make “useful allies in Lebanon to consolidate its influence at all levels and in all communities” — a strategy devised and implemented by the late President Hafez al-Assad.

On the Christian scene, the Syrian regime established several networks, notably based on the alliance of minorities. First was its traditional ally, Sleiman Frangieh’s Marada Movement.

Frangieh, however, has long insisted on the personal and apolitical nature of his relations with Assad.

“Relations with the regime are still strong,” a prominent Marada Movement member said.

During a visit to Beirut on April 14, then–United States Under Secretary of State for Political Affairs David Hale “asked Frangieh about his ties with Assad,” the source added.

Relations between the Assads and the Frangiehs date back to 1958, when Sleiman Frangieh Sr., the grandfather of the party’s current leader, took refuge in Tartus and met Hafez al-Assad after Frangieh’s partisans committed a massacre in a church in northern Miziara, prompting Frangieh and his family to flee Lebanon.

The Marada Movement is banking on its good relations with Damascus as well as Riyadh to try to revive a unified Syrian-Saudi understanding in Lebanon.

From Damascus’ point of view, Frangieh is the ideal candidate for the next presidential election.

Paradoxically, the Syrian regime is also trying to get closer to Gebran Bassil, the president’s son-in-law and Frangieh’s rival.

“Bassil has been seeking to strengthen his relations with Syria and wishes to visit Damascus,” a source close to the Free Patriotic Movement head said.

In 2018, the Christian leader intended to visit Syria, and a meeting was scheduled with Assad. But he was aiming to go on an unofficial visit in a bid to avoid media fanfare and the ire of the West, notably the US — which prompted Damascus to cancel the meeting.

Bassil is counting on the normalization of relations between Syria and the Arab World and on the nuclear agreement between Iran and the US, to strengthen his position on the local scene as a privileged ally of the axis of resistance.

Beyond these prominent figures, Damascus also relies on a raft of second-tier Christian politicians, including Deputy Parliament Speaker Elie Ferzli and other local personalities.

This is not to mention the Syrian Social Nationalist Party, whose military parade along Beirut’s Hamra Street earlier this month was deemed by some March 14 analysts as a provocation sponsored by the Syrian regime.

On the Sunni scene, the Syrian regime tried to promote an image that Damascus was at the heart of the Arab World with Lebanon as a natural extension of Syria. However, this discourse was largely undermined with the outbreak of the war, which complicated Damascus’ relations with Sunnis in Lebanon. Today the Syrian regime can lean on only a few second-tier Sunni personalities, who have little influence in the community.

Arslan and Wahab, like the SSNP, hope for a return of the Syrian regime in Lebanon to regain some of their past power because they are now under Hezbollah’s control.

“Hezbollah spends its time trying to make everyone happy, while the Syrian regime was able to impose its will,” a source close to both men told L’Orient-Le Jour.

Syrians in Lebanon went to the polls last week for their country’s presidential election in convoys of vehicles bearing paraphernalia supporting President Bashar al-Assad. The scene brought back to the minds of Lebanese the demons of the past, and rekindled what for some is the worst fear — of the Syrian regime’s return to Lebanon.The Syrian government’s military victory — made...