What is left of Lebanon’s Syrian Social Nationalist Party?

While the war in neighboring Syria at one point allowed the SSNP to consolidate its ranks, deep divisions continue to plague the party. 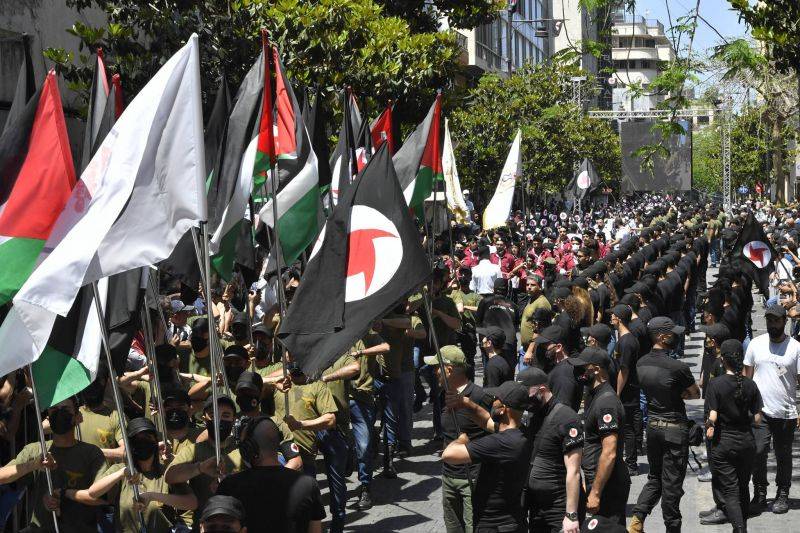 The scene on Sunday in Beirut’s Hamra Street appeared to be from a completely different time.

Donning black caps and khaki t-shirts, SSNP partisans put on a military parade and marched through the streets in a ceremony to commemorate the anniversary of the Israeli withdrawal from south Lebanon 21 years ago.

During Sunday’s military show — which brought the party front and center after it had almost slipped into oblivion — partisans shouted death threats against Samir Geagea, the Lebanese Forces party leader. Last week, as Syrians in Lebanon went to the polls for their country’s presidential election, Geagea made comments that all those voting for President Bashar al-Assad should return to Syria, while his supporters attacked vehicles bearing pro-Assad paraphernalia on the highway in Kesrouan.

While the SSNP can rely on the support of a few Lebanese fiefdoms that are traditionally faithful to it — notably in the Metn district, Beirut and Amioun in the Koura district in the north — the party, founded by Antoun Saade in 1932, has long been relegated to the background on the Lebanese political scene.

In fact, the party has just three MPs, only two of whom are party members: Assaad Hardane (Marjayoun-Hasbaya) and Salim Saadeh (Koura). Albert Mansour (Baalbeck-Hermel) is affiliated with the SSNP but not a member.

The party has been especially weakened by years of turf wars.

More recently, in broad daylight on Feb. 3, 2020, militiamen loyal to Hardan, former president of the party, broke into the SSNP offices in Batroun — an event that starkly contrasts with the obscurity otherwise surrounding the SSNP’s internal affairs.

All the party members interviewed by L’Orient-Le Jour requested anonymity.

Internal divisions have been an integral part of the history of the Pan-Syrian nationalist party. During the 1975–90 Civil War in Lebanon, the party was marred by a schism between a reformist branch close to the Palestinian factions and another more inclined toward Damascus. In 1978, the SSNP reunified its ranks.

Since the death of its leader Antoun Saade, who was executed on July 8, 1949, the SSNP has experienced persistent tensions over the best way to preserve his legacy in a context that has since changed drastically.

Originally opposed to Arab nationalism — the SSNP sided with then-President Camille Chamoun’s camp during the 1958 crisis — it was not until 1969 that the party further aligned itself with the cause.

Upholding secular and anti-colonial principles, for several decades, the party enjoyed great success, especially among Christian youth who did not identify with Lebanon’s vision as presented by the Kataeb party, the SSNP’s historical rival.

The party leader’s cult of personality and the party’s flag — a red whirlwind on a white and black background reminiscent of the Nazi swastika — military salute and rigid command structure, are all elements echoing fascism, something that the party’s opponents have constantly accused it of.

While Saade, a diehard Germanophile who spoke German too, was undoubtedly influenced by the ideologies of this time, he always denied this leaning, even at the height of German domination.

His national vision was based on belonging to one’s geographical milieu, rather than one’s race. His supporters insist that their leader chose the party’s emblem long before he learned of Nazism.

The party ‘rediscovers its raison d’être’

Throughout the 20th century, the SSNP’s history has been one of armed combat, attempted coups (in 1961) and political assassinations.

President-elect Bachir Gemayel was also assassinated by a member of the party in 1982.

After the Civil War, the SSNP placed the struggle against Israel at the core of its ideology, and later allied itself with Hezbollah at the heart of the March 8 coalition, even though the two parties had clashed for many years.

In 2005, after decades of political oppression at the hands of the Baath Party in Syria, Syrian President Bashar al-Assad allowed the “qawmiyin” — the party members — to resume their activities in Damascus and the rest of the country.

The war in Syria, which broke out in 2011, was an opportunity for the SSNP to take on a new dimension.

The party’s military wing, the “Eagles of the Whirlwind,” recruited thousands of fighters who were engaged on several battlefronts, notably in Homs and Aleppo.

“The Syrian conflict allowed the SSNP to regain its strength and rediscover its raison d’être,” Christopher Salomon, who authored a book on the party titled In Search of Greater Syria: The History and Politics of the Syrian Social Nationalist Party, told L’Orient-Le Jour.

Samir Akil, a Syrian political analyst based in Australia, explained that the SSNP enjoys great popularity in Syrian government-controlled areas.

“The bulk of the party’s ranks in Syria is made up of Christian and Shiite, but also Alawite, minority groups, all of whom represent a threat to the Assad clan,” he said.

But the SSNP’s relations with the Syrian government are currently a source of tension within the party.

Hardan, who wanted to run for a third term as party leader in July 2020 — a move prohibited under the SSNP constitution — is close to Damascus and the parties of the March 8 camp.

His candidacy was declared void. Many partisans criticized him for not being faithful to the party’s historical line and for having become part of the Lebanese political game.

After the spoiled vote, a reform movement, dubbed the July 8 branch, emerged within the party.

“It’s a whole new generation of comrades who dream of change. The party needs to reinvent its strategy in order to face new challenges, whether at the level of corruption, environment [or] agriculture, among other challenges,” a party member said on condition of anonymity.

With the election of Rabih Banat at the head of the SSNP in the second round of the vote in September 2020, the schism was confirmed.

Some of the party’s popular committees accepted the new leadership in the wake of the elections; others rejected it, insisting on sticking with Hardan.

While it is difficult to know exactly what percentage of party members remain supporters of the party’s parliamentary bloc, a source within the SSNP assures that less than 20 percent are still loyal to it.

Today, the SSNP offices in Raouche are occupied by the new administration, while Hardan and his people ensconce themselves in the Hamra offices.

When Saad Hariri was named to form a government in October 2020, the gap widened further. During parliamentary consultations, SSNP MPs backed the naming of Hariri as prime minister-designate. Hardan had gone against the party’s recommendation.

“No one in the SSNP wanted Hariri. We know for a fact that he will not be able to solve the problems facing Lebanon,” another party member claimed.

Correction: As first published, the translated version of this article mistakenly gave the impression that the SSNP had more closely aligned itself with the movement of former President Camille Chamoun. The text has been modified to correct this error. Apologies.

The scene on Sunday in Beirut’s Hamra Street appeared to be from a completely different time.Donning black caps and khaki t-shirts, SSNP partisans put on a military parade and marched through the streets in a ceremony to commemorate the anniversary of the Israeli withdrawal from south Lebanon 21 years ago.During Sunday’s military show — which brought the party front and center after it had...

In his battle against Hezbollah, Geagea is using the party’s own tactics

Macron to L’Orient-Le Jour: ‘I will not let Lebanon disappear’