Here’s what happened yesterday and what to expect today, Friday, February 12, and this weekend 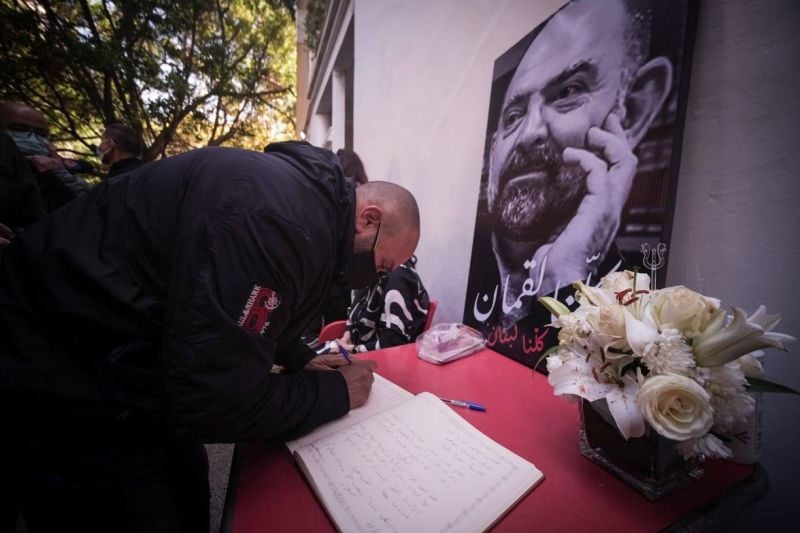 Friends, family members and well-wishers gathered for the funeral of activist and researcher Lokman Slim in the garden of his family home in Haret Hreik. The ceremony included prayers by Muslim and Christian religious leaders, as well as speeches by foreign diplomats. The presence of US Ambassador Dorothy Shea, a Trump appointee who had represented the “maximum pressure” approach to Iran and Hezbollah, was unusual in an area where Hezbollah is the dominant political player. On the same day, after a meeting at its headquarters, also in Haret Hreik, Hezbollah’s parliamentary bloc issued a statement condemning “political accusations” against the party in relation to the killing of Slim — the group has been widely blamed for Slim’s murder, given that he had been one of their most outspoken opponents in the Shiite community — which it said aim to “create chaos and provide free services to the Israeli enemy and its US employer.”

Former army chief Jean Kahwagi appeared for questioning before Judge Fadi Sawwan, who is leading the investigation into the Aug. 4 Beirut port explosion. In a statement, Kahwagi said he had testified that customs officials at the port had notified the army of the ammonium nitrate stored there in late 2015 and asked if the army wanted the material. Kahwagi said the army had inspected the material but declined to take it. Instead, in a letter sent in April 2016, the army suggested the ammonium nitrate be sold to a local company manufacturing explosives or sent back where it had come from. A judicial source told L’Orient Today that the port’s acting director-general, Bassem al-Qaissi, is among the other witnesses Sawwan has summoned for questioning, as is Mustafa Baghdadi, the shipping agent for the MV Rhosus, the ship that transported the load of ammonium nitrate to Beirut in 2013.

Protesters, some of whom spent the night sleeping in front of the military court in Beirut, gathered again to call for the release of demonstrators detained in Tripoli last month. Ayman Raad, an attorney with the Lawyers’ Committee for the Defense of Protesters, wrote in a statement posted on Facebook that 23 protesters remained in detention, of whom he said 19 had been interrogated by security services without a lawyer being present, in violation of Article 47 of the code of criminal procedure. He also alleged that some of them had been beaten while in custody. Authorities had responded to the demonstrations in the impoverished northern city with a heavy hand, using rubber bullets, tear gas and live fire; one civilian was killed in the clashes.

Meanwhile, protests by contracted primary school teachers in front of the Education Ministry grew contentious, with demonstrators scaling the wall around the building and scuffling with security forces. The teachers were protesting over pay cuts due to the move to online learning, as well as what they described as the ministry’s failure to provide resources necessary for online learning, including laptops and assistance with internet access, to either teachers or families.

The first batch of Pfizer COVID-19 vaccines is set to arrive in Lebanon on Saturday, with rollout of the national vaccination program beginning on Monday. Appearing at a press conference with caretaker Education Minister Tarek Majzoub Thursday, outgoing Health Minister Hamad Hassan said the education sector will follow the health sector in terms of priority for COVID-19 vaccination so that schools can reopen as soon as possible. He noted that international organizations have donated 80,000 rapid COVID-19 tests to be used in schools and that the Lebanese University has an initiative to provide 50,000 AstraZeneca vaccines for secondary school students. Majzoub noted that while other countries have left the education system to later stages in their vaccination plans, Lebanon’s electricity and internet issues make online learning particularly difficult, and create added urgency to reopen schools.

Primesouth’s contract to operate and maintain the Deir Ammar and Zahrani power plants ends on Monday. The two plants provide about 40 percent of Lebanon’s electricity. “It is unclear whether the company will renew the contract” due to hard currency settlement issues, a source at Primesouth told our sister publication Le Commerce du Levant. The country is facing other challenges to maintaining the supply of electricity as its contract with the fuel supplier Sonatrach ended on Dec. 31, 2020, and the state has not yet found a replacement. Questions also loom regarding the continued use of the central bank’s dollar reserves to facilitate fuel purchases.

Sunday marks the 16th anniversary of former Prime Minister Rafik Hariri’s assassination. Due to the COVID-19 pandemic and lockdown measures, there will be no public event to mark the occasion. Instead, his son and current Prime Minister-designate Saad Hariri will make a televised speech.

Want to get the Morning Brief by email? Click here to sign up.Friends, family members and well-wishers gathered for the funeral of activist and researcher Lokman Slim in the garden of his family home in Haret Hreik. The ceremony included prayers by Muslim and Christian religious leaders, as well as speeches by foreign diplomats. The presence of US Ambassador Dorothy Shea, a Trump appointee who...