Not hungry, but frustrated: Omar Tayba’s family describes the brother and son who was killed in Tripoli’s protests 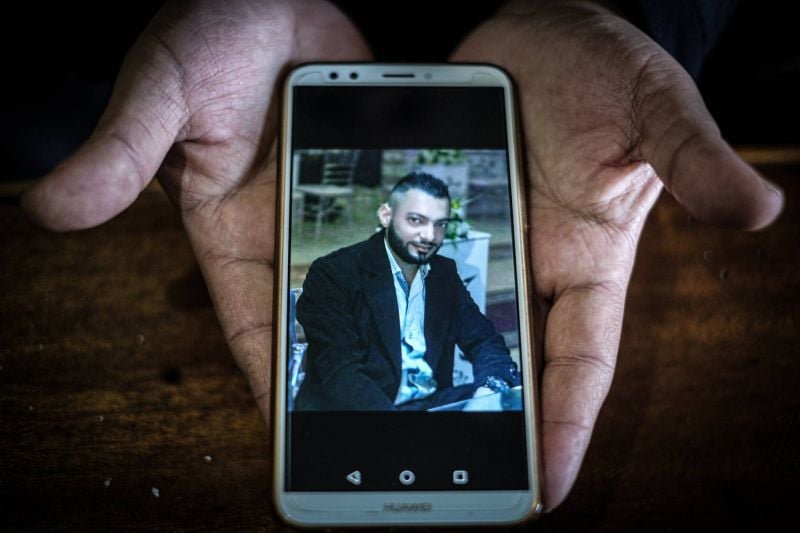 Farouk Tayba holds a phone with a picture of his son, Omar. (Credit: João Sousa/L’Orient Today)

TRIPOLI — On Wednesday night, 29-year-old Omar Tayba made a fateful decision to go down with a friend to Tripoli’s Al-Nour Square, where protests had kicked off for the third night in a row.

The square had been the center of months of mass protests during the uprising that began on Oct. 17, 2019, and Omar used to go down to join the crowds.

“He would get excited about the idea of changing something in this country, like all these young guys,” his father, Farouk Tayba, told L’Orient Today in an interview in the family’s home in Bab al-Tabbaneh, the home where Omar had lived, sharing a room with his 13-year-old sister.

Farouk was skeptical of the revolution, as the protesters called it, but he agreed with his son’s rejection of the political class. He had refused to vote in parliamentary elections his whole life “because I haven’t found anyone, basically, who I believe would represent my voice in Parliament,” he said.

Now, protests had rekindled amid a deepening economic crisis and a new COVID-19 lockdown imposed without any social assistance to offset its effects. This time they were more violent and drew a different crowd, including a lot of young boys who came to throw rocks at security forces.

Omar’s older brother Ahmad, who used to drive a school bus but had been working as a taxi driver amid the COVID-19 school closures, was heading out to make a work trip and ran into Omar on the way out.

Ahmad lived in the same building; when he had wanted to get married and couldn’t afford a house of his own, Farouk had divided the family home into two apartments so Ahmad and his bride could have their own space.

The brothers were close. Back when they were kids, if someone picked on Ahmad, Omar would leap to his defense, even though Ahmad was four years older than him.

“I went down and he was coming down behind me,” Ahmad said. “I asked him, ‘Where are you going?’ He said, ‘To Al-Nour Square.’ I told him, ‘No! Haven’t you seen what the situation is like down there?’”

He had seen on the news that protesters had started throwing Molotov cocktails at the government serail and security forces were responding with tear gas. Omar promised his brother he would stay away from the clashes.

“He told me, ‘There’s a guy selling coffee [in Al-Nour Square] and we’ll sit there and drink coffee and watch, that’s it, just to entertain ourselves a bit, and then come back.’”

But he didn’t come back.

A modest dream out of reach

Omar had grown up in Bab al-Tabbaneh, the middle one of five children. The family was “not rich, but we were happy,” his older sister, Sara, recalled. Farouk made a modest but decent living running a mini-market, which Omar eventually took over while his father drove a taxi.

Before that, Omar had worked a succession of jobs: as a mechanic, in a pastry shop, fixing air conditioners, making cheese. He had left school in the fifth grade — not because the family needed him to work but because he couldn’t sit still, said Sara, who herself graduated from the Lebanese University.

They were a tight-knit family. If Sara, who lives in Beirut with her husband and two young children, didn’t come up to visit in any given week, Omar would start lobbying her to come: “Where are you? We miss you.”

When the family was gathered, he would suddenly put on a pop song and coax his siblings to get up and dance with him. He would start to play-wrestle with his young nephew or with Farouk.

“Omar was the joy in the house,” Sara told L’Orient Today, as she replayed a video on her phone of Omar twirling her son in the air, both of them laughing like children.

But he was also increasingly frustrated.

“Omar — today there are dozens, hundreds, thousands like him in Lebanon,” Farouk said. “A young man, 29 years old, he’s not able to get married or do anything. You know, a young man, the first thing he thinks about is to start his own household and get married and start a family, and to have work that would support him.”

In today’s Lebanon, even that relatively modest dream was increasingly out of reach.

The political and economic upheaval in the country, followed by the COVID-19 pandemic, had taken a toll on the family.

In October 2019, Farouk had bought a car — borrowing $7,500 from a friend to do so — to use for his taxi business. But with the outbreak of civil unrest and constant road closures, driving work dried up.

Meanwhile, with the collapse of the currency and spike in the price of imported goods, the mini-market was going under.

In the end, he had to close the store.

That left Omar sitting at home without work. Like many young Lebanese, he began to think about ways to leave the country. He had a cousin who had gone to Turkey; eventually, Omar prevailed on his father to help him buy a plane ticket so he could go and try his luck there.

He went in September, but returned just over a month later. Not knowing the language, he found it difficult to navigate, and he felt that employers and Arabic-speaking middlemen kept taking advantage of him. The factory job that he had been promised would pay $300 a month turned out to pay only $200, barely enough to pay the rent, and to get from Turkey to any other European country would have required paying a smuggler upwards of $5,000. 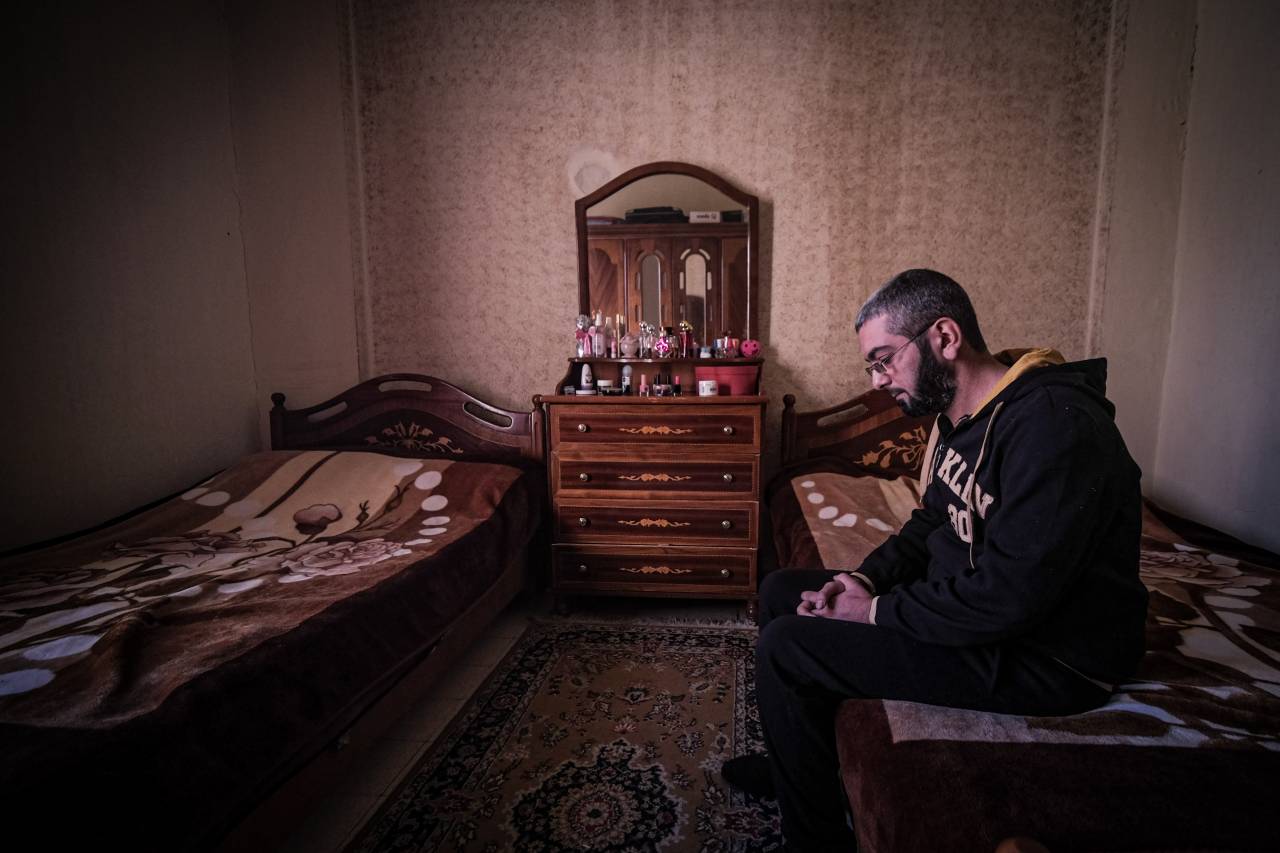 His father, who had told him when he bought his ticket to Turkey, “There’s no return ticket,” relented in the face of his mother’s pleading and bought him a ticket back — although the return trip was delayed by 10 days when Omar tested positive for COVID-19.

As full of life and good spirits as Omar could be at times, other times he seemed to disappear into himself. He would sit for hours scrolling through social media on his phone without speaking. Farouk said his son had told him he had no hope for the future.

As Ahmad was driving through the city center, he heard gunshots. His heart began to pound.

It was the last time they would speak.

That night, Omar was rushed to the hospital with a bullet wound in his back. He died early the next morning. His family brought his body back to be buried in Bab al-Tabbaneh, but his phone and wallet had disappeared.

On Thursday the Internal Security Forces put out a statement acknowledging that its officers had fired live bullets, but saying they had acted in self-defense and that dozens of its officers had been injured by projectiles, including grenades, thrown by protesters. It is not clear what part, if any, Omar had taken in the clashes.

To date, no official from the government or security forces has contacted the family, Farouk said, but he plans to seek justice.

“I want my right, and I want my son’s right under the law,” he said.

Not a martyr for hunger

Omar was immediately proclaimed a martyr of the revolution, joining a roster of six others who had died in the protests since Oct. 17, 2019, including two in Tripoli.

Because he was from Bab al-Tabbaneh, an area known for poverty and for fighting that took place there periodically from 2008 to 2015 between militias in Tabbaneh and the adjacent neighborhood of Jabal Mohsen, some dubbed Omar a “martyr for hunger” or “martyr for a loaf of bread.” The monikers bothered his family, who had always been proud that they didn’t have to beg for handouts.

“The situation of the country is not good, no question there,” Sara said. “Omar wasn’t happy. He wanted to have work, of course, he wanted to have a good job. Of course Omar wished he could get married and have a decent salary. … Maybe he went down there thinking it’s a revolution and they would make a change, but he wasn’t a martyr for a loaf of bread.

“Omar was never hungry in his life — he was spoiled,” she added with a fond smile.

A photograph of Omar as a young child. (Credit: João Sousa/L’Orient Today)

Omar also wasn’t one of the young men from Bab al-Tabbaneh who joined up with the militias for a payout of $200 a month. But in Bab al-Tabbaneh, death was a fact of life, and he wasn’t afraid of it.

During one period of clashes, Farouk recalled, a man was gunned down in the street in front of their house. Fearing that a sniper might be waiting to attack again, no one dared to go down and move him out of the road.

At 55, Farouk has also seen his share of death. Before Omar was born, he had already lived through the 1975-90 Civil War. But nothing had prepared him for what he is living through now.

“I saw a lot of people, young men dying in front of me, my friends and people I loved,” Farouk said, sitting in the family’s living room three days after his son’s death, as a steady stream of relatives, friends and strangers came to offer their condolences. “That’s one thing, and your son dying is something else. My friend’s son might die, and I would go to condole him, and you know it’s hard, but you don’t know how hard. You don’t know until it happens to you what it does to your heart.”

The family tries to take consolation in the thought that Omar, as a martyr, must be in heaven. After Omar’s death, Farouk said, among the people who came to offer their condolences was the husband of an old woman who knew Omar from the mini-market and was fond of him.

“Her husband came here and said, ‘I want to tell you something. My wife, she saw Omar in a dream, and he was laughing, happy, and he told her, “Tell my family not to be sad for me. I’m happy,’” Farouk said.

And he began to cry.

TRIPOLI — On Wednesday night, 29-year-old Omar Tayba made a fateful decision to go down with a friend to Tripoli’s Al-Nour Square, where protests had kicked off for the third night in a row. The square had been the center of months of mass protests during the uprising that began on Oct. 17, 2019, and Omar used to go down to join the crowds.“He would get excited about the idea of changing...