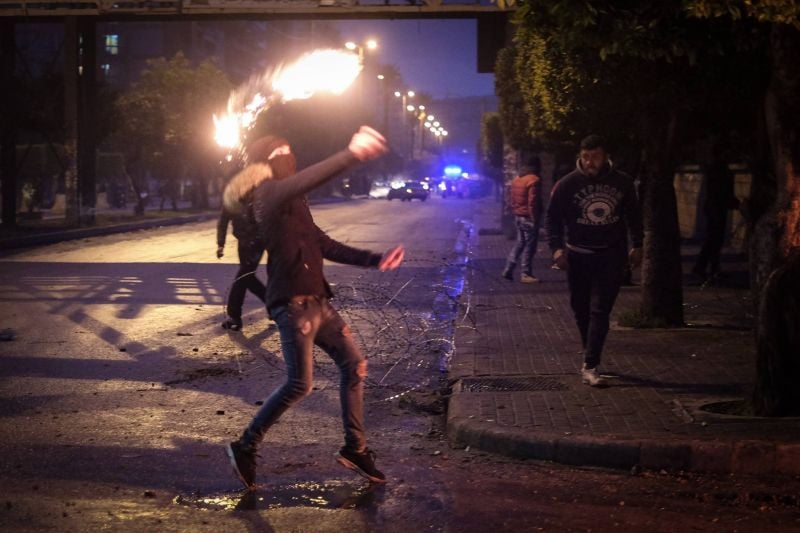 TRIPOLI/BEIRUT — A young man who took part in protests in Tripoli died of his injuries Thursday after being wounded in violent clashes between police and security forces Wednesday night.

Videos showed his funeral procession making its way through Bab al-Tabbaneh Thursday afternoon, with young men calling out condemnation of the government and officials they held responsible for Tayba’s death as they carried his coffin overhead.

Chadi Nachabe, a social activist and member of the Tripoli municipal council, told L’Orient Today that another wounded protester, a young boy of 13 or 14 years of age, remained in critical condition.

According to witness reports, security forces had fired live bullets to disperse protesters who were hurling projectiles at security forces and attempting to breach the government serail building.

On Thursday, responding to criticisms of the use of force, the Internal Security Forces acknowledged in a statement that its officers had shot live bullets in the air and “defensively in order to preserve their lives” during Wednesday night’s protests. It said that 41 ISF officers had been injured, 12 of them by grenades, and that protesters had thrown more than 300 Molotov cocktails during the clashes.

Clashes continued Thursday night, as protesters continued to surround the serail, hurling Molotov cocktails and fireworks, setting fires and attempting to break down the entrance to the building. Security forces responded with heavy tear gas to disperse them.

Late in the evening, a Molotov ignited in the municipality building, setting it fully ablaze. Firefighters rushed in to battle the blaze. The Lebanese Red Cross reported that 106 people wounded in the protests were treated at the scene Thursday night and six were taken to local hospitals.

The death of the protester added fuel to anger over the countrywide lockdown and lack of government aid, but some said the anger long predated not only these protests but the previous uprising that began on Oct. 17, 2019.

“From before Oct. 17, before the revolution, we were sitting without work,” one protester told L’Orient Today.

A protester named Alaa, who said he knew Tayba from Bab al-Tabbaneh, said that Tayba had been unemployed like most young men in the area.

“Who is not poor over here?” he asked.

Nachabe said the unemployment rate in the area — which he pegged at more than 60 percent — was a large factor driving the “feeling of political and economic marginalization” among the people of Tripoli that had exploded into anger on the streets.

“The state and the government haven’t given us any solutions,” he said. “With the lockdown, the general closure that is happening now, they aren’t taking procedures to give support to the Lebanese citizens with social services. They’re imposing a closure, and at the same time they’re not giving social support.”

Smaller protests were held in solidarity with Tripoli elsewhere in the country, including in Beirut, where some protesters returned to Riad al-Solh Square, and others briefly blocked the road in front of the Interior Ministry building in Sanayeh and then marched to caretaker Interior Minister Mohamed Fehmi’s house in Qoreitem in protest over the ISF’s use of force.

Meanwhile, Amnesty International on Thursday released a report accusing the French government of supplying Lebanese security forces with law enforcement equipment — including tear gas, rubber bullets and armored personnel carriers — that were used unlawfully to commit excessive force against protesters. The group called on France to halt sales of the equipment until Lebanese authorities have “acknowledged past violations and most importantly taken action to deter them from reoccurring.”

In a statement responding to the report, the French Embassy in Beirut said that sales of “classified equipment that can be used for maintaining order are subject to very great vigilance and a case-by-case examination by the French authorities, in accordance with their international commitments. This is particularly the case in Lebanon, which is going through a serious economic, social and political crisis, and whose stability is essential for the entire region.”

It added that France regularly reiterates the need for “respect for the right of the Lebanese to demonstrate peacefully.”

Correction: This article originally reported that a second protester, Osama Ghoumrawy, had died, based on the confirmation of two Tripoli city council members, one of whom forwarded a photo appearing to confirm the protester’s death, as well as an interview with someone who identified himself as a neighbor of the allegedly deceased and multiple media reports of the death. It now appears that an Osama Ghoumrawy did not die, based on calls to multiple Tripoli-area hospitals, which all said no one by that name had been admitted, and a phone interview with a 23-year-old Osama Ghoumrawy from Beddawi, whose picture had been circulated as that of the allegedly deceased, and who told L’Orient Today that he had not attended the protests, been injured or been to the hospital. L’Orient Today regrets the error.

TRIPOLI/BEIRUT — A young man who took part in protests in Tripoli died of his injuries Thursday after being wounded in violent clashes between police and security forces Wednesday night.Omar Farouk Tayba of Tripoli’s impoverished Bab al-Tabbaneh neighborhood died at Nini Hospital Thursday morning after being brought there Wednesday evening with a gunshot wound. Videos showed his funeral...