Frangieh breaks the monotony of the presidential soap opera

The next electoral session is scheduled for Nov. 24. 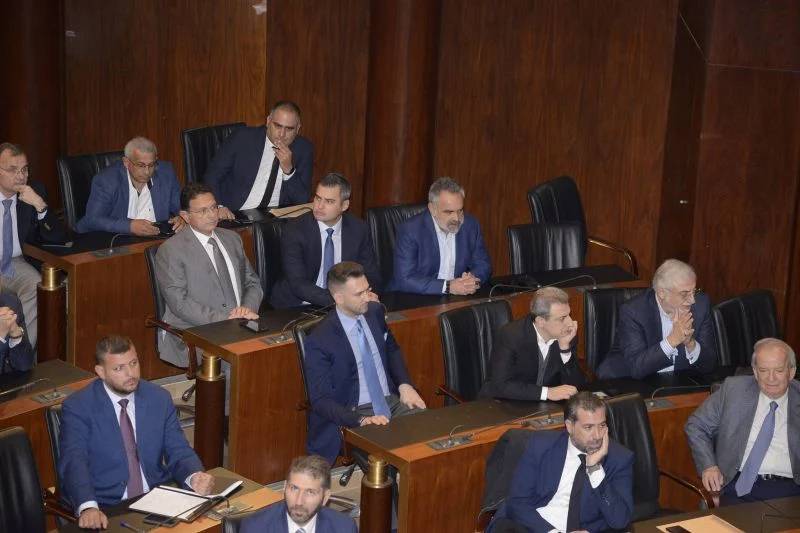 Who voted for Sleiman Frangieh? On Thursday evening, several hours after the sixth session to elect a president was adjourned, no one was able to answer this question.

What seems certain is that this “orphaned vote” does not change the presidential equation, while carrying more than one message at the same time.

Frangieh remains Hezbollah’s undeclared favorite for the presidency, to the great displeasure of Free Patriotic Movement leader Gebran Bassil, Hezbollah’s other Christian ally who considers himself a “logical candidate” for this position.

The blank ballots suggest that, in the eyes of Hassan Nasrallah’s camp, it is still not the right time to get serious.

Gebran Bassil is in Paris to consolidate his position

The sixth round of this farce took place Thursday at Place de l'Étoile, part of the weekly ritual that promises to drag on forever — or until a broad agreement is reached and the party is finally made to end.

In the run up to the next session, scheduled for Nov. 24, here are some important points to take away from Thursday’s meeting:

Six sessions into the process, the Marada leader won the vote of a single MP, whose name was not disclosed. It is a surprise vote given that, since the constitutional deadline to elect a new head of state came into effect, Hezbollah has been keen not to push the Zgharta leader’s candidacy to the point of preventing even his son Tony — the only Marada MP — to vote for him.

What has changed? Did Hezbollah decide to act after Hassan Nasrallah’s last speech, in which he advocated the election of a president who “would not stab the resistance in the back”?

A few hours earlier, Hezbollah Deputy Secretary-General Naim Qassem set the record straight. “We have not yet announced the candidate for whom we will vote, in a desire to allow more time for dialogue with the other parliamentary blocs, in order to choose a president appropriate to the current phase. The blank ballot is a positive sign that paves the way for an agreement,” he tweeted.

“We don’t want to maneuver as some do,” Qassem added, “by discrediting names before opting for their real choice.”

It is important to understand that Hezbollah saw this lone vote for Frangieh as an attempt to discredit its candidate. Another way of seeing things, to which some circles close to Bnechaai adhere, suggests that an FPM MP voted for Frangieh.

Based on this reading, it would be a way for Bassil to send Hezbollah the message that its favorite candidate — to whom the FPM is categorically opposed — does not have broad parliamentary support, especially within Christian ranks, and that his stock is even lower than that of figures low on the list of serious presidential candidates.

“Let them elect Sleiman Frangieh if they can,” MP Caesar Abi Khalil, (FPM/ Aley) told L’Orient-Le Jour, boasting that his bloc (a dozen of whose MPs did not attend) cast blank ballots.

Unlike the previous sessions, the MP for Zgharta and presidential candidate endorsed by several opposition factions — including the Lebanese Forces, the Kataeb and the Progressive Socialist Party — saw his stock drop Thursday from 49 votes (44 + five absentees, at the Nov. 10 meeting) to 43. He might have obtained 45 votes had MP Adib Abdel Massih (Koura) and MP Ihab Matar (Tripoli) participated in Thursday’s session.

Frangieh eagerly seeks out the keys to Baabda

Once again Moawad relied on MPs from the LF, the PSP, the Kataeb and his Renewal bloc, as well as some independents, but lost the support of four MPs who had previously voted for him. They belong to the National Moderation bloc, mainly North Lebanon Sunni MPs who had been affiliated with Hariri. This time they voted for “the new Lebanon.”

Several parliamentary sources attributed this change of heart to “pressure that caretaker Prime Minister Najib Mikati would have exerted on some MPs belonging to this bloc during a meeting held Wednesday.”

This suggestion was denied by Tripoli MP Ahmad Kheir, who was present at the meeting with Mikati. “We did not discuss the presidential election, but daily life-related issues.” he said, claiming that his bloc will continue to vote for “the new Lebanon” until a broader agreement is reached.

As the electoral soap opera drags on, the gap separating MPs associated with the protest movement widens. On Thursday, thawra MPs (who went to Parliament without Paula Yacoubian) once again arrived there divided. Six of them (Halimé Kaakour, Melhem Khalaf, Yassin Yassin, Ibrahim Mneimneh, Firas Hamdan and Cynthia Zarazir) again voted for university professor Issam Khalifeh. . Their ballots joined that of Saida MP Osama Saad, who has been consistent in his support of Khalifeh.

For his part, Elias Jaradeh — who last week voted for Ziad Hayek, former secretary general of the Higher Council for Privatization and Partnerships (HCPP) — voted Thursday for Ziad Baroud.

“The time for voting to discredit names is over,” Jaradeh told L’Orient-Le Jour.

Finally, it should be noted that Thursday’s session was marked by a heated debate over the quorum required for meetings, and for the election of the president in the second round.

In a re-run of the previous session, controversy erupted after Kataeb party president Sami Gemayel asked Berri a question. Once again Berri ruled that, based on his own judgment and contrary to the Constitution, a two-thirds quorum is required to elect a president in all rounds.

Who voted for Sleiman Frangieh? On Thursday evening, several hours after the sixth session to elect a president was adjourned, no one was able to answer this question.What seems certain is that this “orphaned vote” does not change the presidential equation, while carrying more than one message at the same time. Frangieh remains Hezbollah’s undeclared favorite for the presidency, to the...