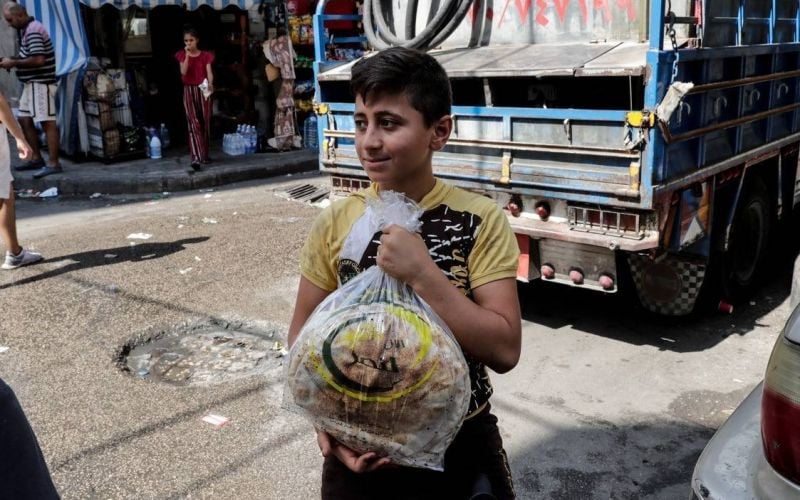 A young boy leaves a bakery with a bag of bread in the neighborhood of Nabaa in the Lebanese capital Beirut's southern suburbs. (Credit: AFP)

Since 2019, Lebanon’s economic crisis has progressively worsened, and the protracted state of the debilitating depression has cemented feelings of perpetual despair across the country.

Core dimensions of human rights, like access to education, health care, essential utilities, housing, property and income, are becoming increasingly scarce in Lebanon. And while the breadth of that suffering is rapidly rising, it is also exacerbating existing structural inequalities and disproportionately affecting those with lifecycle vulnerabilities, such as people with disabilities or families struggling to raise children.

But while we all track the crisis on our phones and live through the country’s daily unraveling, up-to-date, national data and information has been lacking.

Lebanon’s youth is 'past its breaking point': report

In a new qualitative study titled “Deprived Childhoods,” UNICEF sheds light on this shifting tide of vulnerability and alienation in the country by portraying the human side to the deteriorating and multidimensional state of childhood poverty in Lebanon. Instead of relying on statistics, the study communicates the raw reality of how people are living today and is cause for alarm. The picture painted makes clear the urgency for corrective action from every stakeholder failing to work towards stabilizing the crisis and implementing the reforms needed to ensure a sustainable and inclusive recovery.

Family and mental health breaking down

First, the basic rights of children in Lebanon as defined by the UN Convention on the Rights of the Child, i.e. their right to health, welfare, protection, education and right to play — their fundamental right to be children — are all collectively being infringed upon.

At the heart of this plight is the economic meltdown’s suffocating constraints on the ability of households and caregivers to provide for their children. Mothers tell of not treating broken limbs. Children take pictures of empty homes — all possessions having been sold. Parents describe putting a good meal on the table each day as a dream, one that has come to replace previous hopes and ambitions for their children.

Beyond the stories of the reality of peoples’ lives, UNICEF also carries out a regular national survey on child well-being. Every six months, the same families are approached, making it possible to track the situation over time. This empirical study — known as the Child-Focused Rapid Assessment — was carried out again last June and found that 84 percent of households in Lebanon did not have enough money to cover necessities. In addition, the study showed that one in four children had recently gone to bed hungry and household debt was on the rise.

Second, at such formative periods in their development, the compounded infringement of these basic rights is significantly undermining children’s mental health. The study found that children demonstrate not only a deep understanding of the country’s severe depression and deteriorating conditions, but they are also experiencing a haunting and constant awareness of its influence over their lives and futures. Feeling the burden, children explained how they no longer ask for many things from their caregivers. According to the CFRA, two out of three caregivers expressed that their children’s mental health worsened over the past year.

Children in Lebanon are deprived of the basics, robbed of their dreams, losing trust in their parents: UNICEF report

Third, the extreme vulnerability of families and households, and the consequent pressures children are exposed to, are fueling a social crisis of confidence. The intimate bonds between children and parents, fundamentally rooted in trust, are being undermined by the inability of parents to meet children’s basic needs. Children, on the one hand, are experiencing declining confidence and trust in caregivers who are unable to provide for them. Parents, on the other hand, are stricken by the guilt of this inability to provide such basic needs and the loss of their children’s confidence and respect in their caregiver’s abilities. This effect was particularly pronounced where basic household roles had been reversed and children were now the income earners, while parents were forced into unemployment.

When is enough, enough?

Lebanon is not in a temporary recession. We are stuck, deep, in a “deliberate depression,” which comes at enormous cost. The rising vulnerability of children in Lebanon and the multidimensional attacks on their childhoods, their dreams and on the intimate bonds with their families will be irreversible.

Broadly, massive reforms are needed in the country. We know that wide-reaching economic reform is still needed — this is why Lebanon cannot access IMF support. Equal attention must also be paid to restoring the integrity and availability of key public services, including education, health care and utilities. But change only appears to occur in the opposite direction.

Most urgently, Lebanon needs the immediate setting up of a comprehensive, fair and wide-reaching social protection system to mitigate the worst effects of the crisis on the rights of children and households. All children have the right to social protection, and while other countries have established inclusive national child grant programs, Lebanon’s children are being left behind.

It is hard, three years into Lebanon’s crisis, to think of a more alarming indicator of the country’s proximity to complete failed state status than the inability of parents to provide basic rights to their children. Or perhaps, no consequence of the crisis is more representative of the unraveling of the country’s social contract than the breakdown of relationships between children and their parents.

The very foundations of society that make us who we are, that bind us to one another, are falling apart. There are no short-stop measures to managing Lebanon’s blackhole of a depression — only the ever-urgent need for decisive action to stabilize the crisis and set the country towards a sustainable and just recovery. If not for us, at least, for our children’s sake.

Fadi Nicholas Nassar is a research Fellow at LCPS and Assistant Professor of Political Science and International Affairs at the LAU.

Sarah Hague is  chief of Social policy for UNICEF Lebanon.

Since 2019, Lebanon’s economic crisis has progressively worsened, and the protracted state of the debilitating depression has cemented feelings of perpetual despair across the country.Core dimensions of human rights, like access to education, health care, essential utilities, housing, property and income, are becoming increasingly scarce in Lebanon. And while the breadth of that suffering is...