"Things are not that clear," the Lebanese caretaker prime minister said. 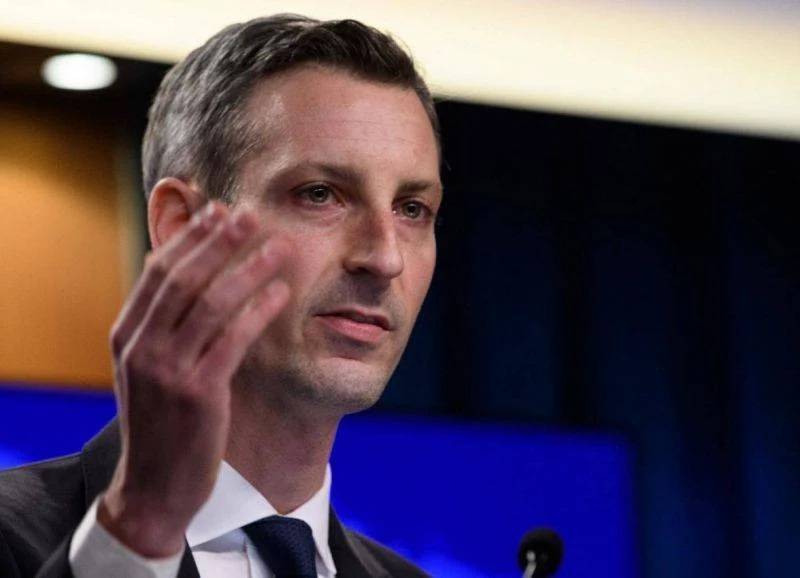 The spokesman of the US State Department Ned Price. (Credit: AFP)

BEIRUT — The spokesperson of the US State Department Ned Price said in an interview Thursday with the American Arabic-language channel al-Hurra that progress was noted by the American envoy Amos Hochstein in the indirect talks on the maritime border between Lebanon and Israel.

However, Lebanese caretaker Prime Minister Najib Mikati seemed less optimistic, saying in an interview with pan-Arab daily Asharq Al-Awsat that "things are not so clear" and the talks are far from having reached their "final" phase.

On the subject of the delivery of Iranian fuel to Lebanon, where state power is severely rationed, Price said that he will "do [his] best" to help the Lebanese people, as the risk of US sanctions against Lebanon for a possible acquisition of this fuel lingers.

'Things are not so clear'

Quoted in an interview published on Thursday, the US spokesman said Hochstein has been successful in narrowing the disagreements between Lebanon and Israel.

"We think it's time for both sides to do everything they can to find a solution to this maritime dispute," he said.

Maritime border: Is the ‘line of buoys’ an Israeli trap?

His comments come amid growing speculation that negotiations could reach an agreement in the coming days or weeks, with both sides expressing optimism.

For his part, Mikati told Asharq Al-Awsat that the US mediation "has still not led" to an agreement. "Things are not so clear," he said, denying any Lebanese-Israeli agreement on this issue. He also said that during his meeting with Hochstein, the latter "informed [him] of some measures that the emissary considers positive, without them being final so far."

Mikati added that he had not discussed "in detail" with the US Secretary of State Antony Blinken "essential points concerning the agreement." The caretaker prime minister met with Blinken earlier this week on the sidelines of the 77th UN General Assembly in New York. "We still have not reached that stage," Mikati noted.

In another interview with the MTV channel on Friday, Mikati acknowledged that the negotiations "are probably at an advanced stage, but [we] must wait for the end of the process."

"We are still waiting for some answers," he said.

Lebanon's Deputy Speaker of Parliament Elias Bou Saab handed over Lebanon's response to the latest Israeli demands to Hochstein in New York on Tuesday. On the sidelines of the UN General Assembly, caretaker Prime Minister Najib Mikati also met with the American diplomat, who has been in contact with the Israeli authorities to reconcile the difference in opinions.

On the energy front, Price did not directly oppose a donation of Iranian fuel to Lebanon, as Lebanon suffers from severe rationing of electricity, due to a lack of funds to import fuel. "The sanctions against Iran remain in force, but we will do our best to remain a partner of the Lebanese people and help them get what they need," he promised.

Mikati mentioned a "small problem regarding the quality of fuel," assuring that it is a "free and unconditioned gift" in his interview with MTV.

Iranian Foreign Minister Hossein Amir-Abdollahian confirmed to Bou Habib that Iran will supply fuel to Lebanon during a Tuesday meeting in New York. A Lebanese delegation discussed in Tehran a project to provide 600,000 tons of fuel free of charge to Electricité du Liban.

In June 2022, Beirut signed an agreement with Cairo and Damascus to import Egyptian gas via Syria in a US-sponsored initiative after Washington suggested it would not be subject to sanctions. Those imports are still pending, however, and it remains unclear whether the US will exempt Lebanon from the Caesar Act sanctions targeting any country, entity or individual collaborating with the regime of Syrian President Bashar al-Assad.

Commenting on the political crisis in Lebanon, the US State Department spokesman said "It is time to overcome the political deadlock that has exacerbated long-term challenges and made life more difficult for the Lebanese people."

For his part, Mikati said in his interview with Asharq Al-Awsat that "the international community is called to make the necessary contacts to facilitate the election of a president." In his remarks to MTV, he hoped that "the meetings he will hold with President Michel Aoun next week will close the government file that does not require much discussion."

The risk of a double presidential and governmental vacancy hangs over Lebanon, as President Michel Aoun's term expires on October 31 without a new government formed. Mikati's ministerial team has been managing current affairs since May 22, and many observers fear that Aoun will remain in Baabda Palace after his term ends, on the grounds that Aoun says a caretaker cabinet cannot exercise the prerogatives of the president.

But in recent days, various political parties, including Hezbollah, have said they expect a new government to be formed soon, while a vacancy in the presidency seems inevitable. On Wednesday, representatives of the US, France and Saudi Arabia met on the sidelines of the UN General Assembly, issuing a joint statement urging Lebanon to hold the presidential election "within the constitutional timeframe."

BEIRUT — The spokesperson of the US State Department Ned Price said in an interview Thursday with the American Arabic-language channel al-Hurra that progress was noted by the American envoy Amos Hochstein in the indirect talks on the maritime border between Lebanon and Israel.However, Lebanese caretaker Prime Minister Najib Mikati seemed less optimistic, saying in an interview with...