Officials sign Egyptian gas import deal, but its implementation is far from imminent 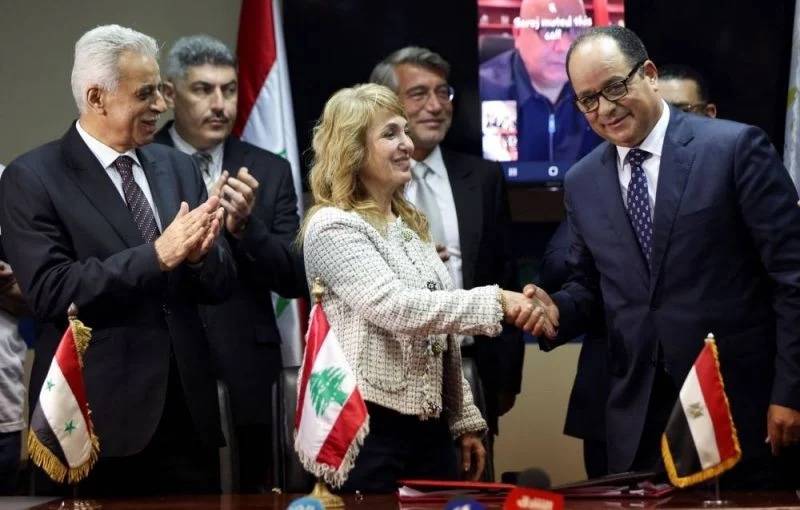 BEIRUT — Officials for Lebanon, Egypt and Syria signed a deal on Tuesday under which Lebanon will receive gas from Egypt by way of Jordan and Syria. However, complications still surround the implementation of the agreement, including its funding and the need for assurances from the US that it will not impose sanctions on the countries involved.

The heads of the oil directorates of Lebanon, Syria and Egypt, Aurore Feghali, Nabih Khrestine and Majdi Jallal, signed the agreement.

“This is a historical moment, and we have just signed a deal to buy natural gas from and an agreement to transport and swap gas through the Arab gas line with our fellow countries Egypt and Syria in order to supply the Deir Ammar power plant [so that it can] generate electricity at full capacity,” caretaker Energy Minister Walid Fayad said following the signing of the deal.

Fayad also said that the Egyptian gas deal will add up to four hours per day to Electricité du Liban’s power provision.

For his part, Jallal said that according to the Egyptian President Abdel Fattah al-Sisi’s orders, “Egypt has finished repairing the gas pipeline and we succeeded to offer [Lebanon] a good price.”

Syrian representative Khrestine said that “Syria has always been cooperative with any Arab initiative … under all pressures we managed to prepare for the deal although our country is experiencing more shortages and although we are not getting any financial benefits out of the deal.”

This deal, in addition to a separate one that was signed in January that aims to supply Lebanon with electricity coming from Jordan through Syria, is part of a US initiative, and both are expected to be financed by the World Bank. The bank, however, has not yet approved the funding.

In addition to the Egyptian gas deal, Fayad said the Jordanian electricity deal and a separate Iraqi fuel deal would supply the country with 8-10 hours of electricity [per day]. “In applying the two deals [Egyptian and Jordanian] we would be implementing the first two terms of the electricity plan [demanded by the World Bank],” he added.

The two deals were announced in August 2021 by the US ambassador to Lebanon Dorothy Shea, amid a major fuel and electricity crisis in the country, and hours after Hezbollah chief Hassan Nasrallah said that a ship carrying diesel from Iran would arrive “within hours.”

The country has been suffering from an unprecedented economic crisis, as well as from the ripple effects of the war in Ukraine, which has caused substantial increases in fuel prices, making it difficult for both the state-owned Electricité du Liban and private generators to provide an adequate supply of electricity at an affordable price. Lebanon has been suffering from electricity shortages for decades, but since the onset of the economic crisis, the sector has deteriorated further. The majority of areas in Lebanon now receive an average of only two hours of electricity per day from EDL, while the gap is partially filled by private generators.

On June 8, Lebanon’s caretaker Energy Minister Walid Fayad told Reuters that “politics” was behind the delay in implementation of the US backed deal to supply Lebanon with electricity from Jordan. Fayad told Reuters that the World Bank, which had said it will finance the project, was “tying it to some kind of political diligence,” hinting at external considerations without getting into details. The Lebanese energy minister continued to say that the World Bank was also "adding more conditions although they were clear at the start.”

The Egyptian gas deal depends on guarantees from the US not to impose sanctions on the countries involved under the Caesar Act passed in 2019 for any country dealing with the regime of Bashar al-Assad in Syria.

Fayad also said that the United States had demanded to "see the financing terms from the World Bank" to ensure that the electricity deal "is not sanctionable," even though Washington had told Beirut in January not to fear sanctions over its regional energy supply plans.

Earlier this month, Egyptian Petroleum Minister Tarek El Molla told Reuters that there was no delay in the deal but that “we need to get through the American approval plus the financing from the World Bank.”

The US energy official Amos Hochstein, who is also the mediator on maritime border negotiations between Lebanon and Israel, said last week in an interview with Alhurra TV that the US is waiting to see the final terms of the deal between Egypt and Lebanon to evaluate its sanctions compliance.

BEIRUT — Officials for Lebanon, Egypt and Syria signed a deal on Tuesday under which Lebanon will receive gas from Egypt by way of Jordan and Syria. However, complications still surround the implementation of the agreement, including its funding and the need for assurances from the US that it will not impose sanctions on the countries involved.The heads of the oil directorates of Lebanon,...

Judicial authority orders the preliminary seizure of the property of two MPs accused in the explosion at...