While the next cabinet is said to contain the same number of ministers, some names may be replaced. 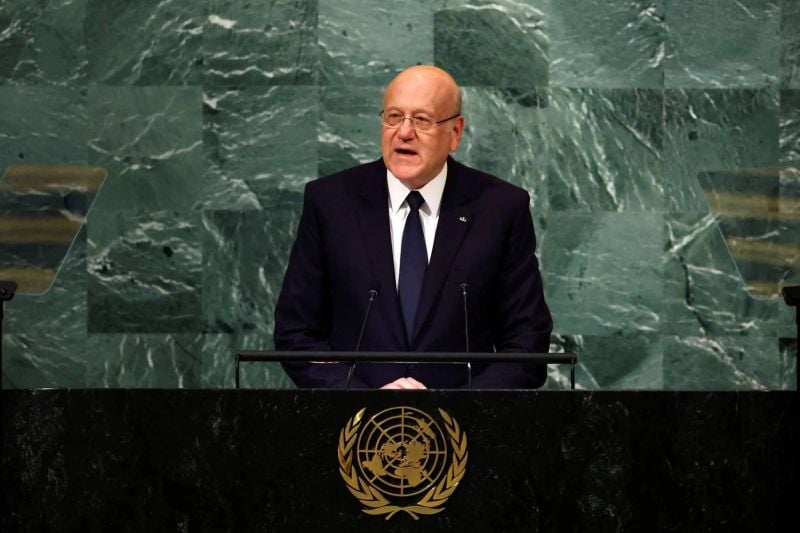 The majority of political stakeholders involved in the formation of Lebanon’s government say they are waiting on caretaker Prime Minister Najib Mikati.

Mikati is currently in New York at the 77th UN General Assembly. Only upon his return will the cabinet’s fate be decided.

In the meantime, the political parties involved in the cabinet formation negotiations appear to be paving the way for the creation of a new government immediately after Mikati's return.

Two scenarios for a cabinet reshuffle are being discussed behind the scenes.

The first involves changes to just two portfolios: the Ministry of Displaced Persons and the Ministry of Economy & Trade. The second scenario implicates broader changes that would affect some sensitive positions, including that of the deputy prime minister.

On his way out of the Baabda Palace on Thursday, Mikati was cautiously optimistic that a new government would soon be formed.

Both France and Hezbollah have made efforts to accelerate the process to avoid a power vacuum after the end of President Michel Aoun’s term in office on Oct. 31.

“We have been in contact with President Aoun and the prime minister, advocating [for] the establishment of a cabinet with full powers to manage the country in the upcoming phase,” a Hezbollah official, who wished to remain anonymous, told L’Orient-Le Jour.

In his latest speech, delivered Saturday in Baalbek, Hezbollah Secretary-General Hassan Nasrallah expressed his hope for a consensus presidential candidate.

Recent reports in the local media indicate Aoun has dropped his demand to expand the caretaker government from 24 to 30 ministers, by adding three Christians and three Muslims.

Mikati has long rejected this option, not wanting Free Patriotic Movement leader Gebran Bassil, who is also Aoun’s son-in-law, ro have a say in the actions of the cabinet that could manage the country in event of a presidential vacancy.

Why did Aoun change his position?

“We don’t know yet," a source close to Hezbollah, who is following the government formation process, told L’Orient-Le Jour. "Aoun surprised Mikati when he raised this point during their meeting last Thursday."

“[Mikati] informed the president that the expansion of the cabinet is facing several vetoes. So the president backed down,” the source added, in reference to Parliament Speaker Nabi Berri’s rejection of the option.

Berri is known to be a fierce opponent of Aoun and supports Mikati’s rejection of the president’s initiative.

“We are against this option because it would undermine the political balance within the ministerial team,” a close associate to Mikati told L’Orient-Le Jour.

The pertinent question is, what kind of government will be formed?

“We are heading for a cabinet of 24 ministers, with some reshuffling,” Ali Darwish, a former Tripolitan MP affiliated with Mikati, told L’Orient-Le Jour.

Two scenarios are being discussed behind the scenes. The first is the replacement of Economy Minister Amin Salam, who is Sunni, with another Sunni figure from Akkar.

The Minister of the Displaced, Issam Charafeddine — who is of Druze origin and is close to Lebanese Democratic Party leader Talal Arslan — would also most likely be replaced, especially after his recent dispute with Mikati over the return of Syrian refugees.

According to a source close to Hezbollah, Charafeddine could be replaced by a Druze technocratic figure.

“The name of Saleh Gharib, former Minister of State for Refugee Affairs, close to Mr. Arslan, was mentioned and then discarded,” the source said.

Is this a way to avoid provoking Progressive Socialist Party leader Walid Joumblatt, since Gharib’s name is linked to the June 2019 clashes of Qabr Chamoun in Mount Lebanon between PSP members and Arslan loyalists?

“We are not concerned by the negotiations because the Minister of Education Abbas Halabi (also of Druze origin) enjoys our confidence,” MP Marwan Hamadeh (PSP/Chouf), told L’Orient-Le Jour.

He added that his party has not vetoed any appointments to the cabinet.

According to L’Orient-Le Jour’s political columnist Mounir Rabih, Hezbollah is making efforts to bridge the gap between Mikati and Charafeddine — something that was not confirmed by Hezbollah sources.

A change of the cabinet composition, like any other political matter in Lebanon, must respect the confessional balance. Any change that affects one religious community must inevitably apply to the others.

This brings us to the second scenario under discussion. In addition to replacing Charafeddine, another possible reshuffle would also affect Christian and Shiite ministers, according to corroborating sources.

Any change would likely involve Finance Minister Youssef Khalil, a Shiite close to Berri, who may be replaced by Yassin Jaber, a former Amal MP from Nabatiye.

According to a source close to the matter, the reshuffle could also involve a Christian minister under the quota of Aoun, likely the Minister of State for Administrative Development, Najla Riachi.

Many observers expect Aoun to take advantage of this opportunity to call for the dismissal of Deputy Prime Minister Saade Chami, who is close to the Syrian Social National Party and a former employee of the International Monetary Fund.

This could be a settlement of accounts between Aoun on one side, and Mikati and Chami on the other.

A year ago, both Mikati and Chami rejected Aoun’s request to appoint two of his advisers to the delegation negotiating with the IMF, in a bid to gain influence in the sensitive issue. Communication between Lebanon and the IMF is correctly coordinated by Chami.

“We cannot say anything until Mikati returns,” Darwish said.

The majority of political stakeholders involved in the formation of Lebanon’s government say they are waiting on caretaker Prime Minister Najib Mikati.Mikati is currently in New York at the 77th UN General Assembly. Only upon his return will the cabinet’s fate be decided.In the meantime, the political parties involved in the cabinet formation negotiations appear to be paving the way for the...