Why Nasrallah is open to a consensus president

Hezbollah’s Secretary-General is aware that no bloc holds a majority in Parliament, which makes it difficult for one side to impose a presidential candidate. 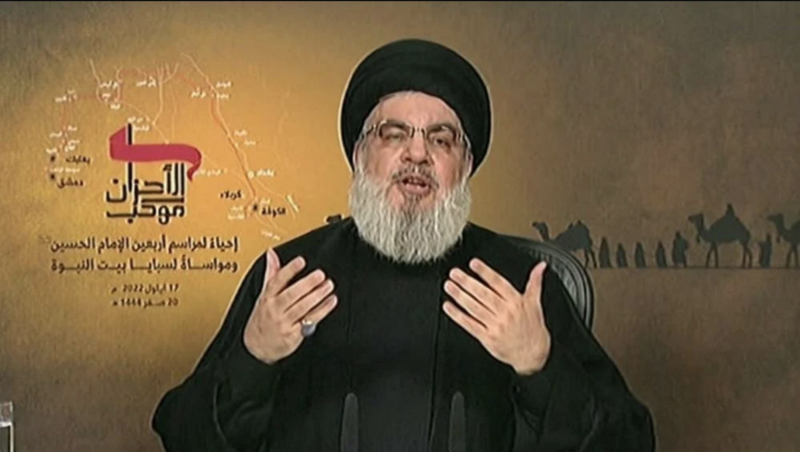 “There are calls for unity around a president, and we call for a consensus on a name, away from vetoes,” Hezbollah leader Hassan Nasrallah said during a speech Saturday in Baalbek.

Not only did he extend the offer to political stakeholders to reach common ground around the future Lebanese head of state, he also called for elections to be held “on time.”

This appears to contrast Hezbollah’s previous stance, when it blocked presidential elections for two years to impose its own candidate, Michel Aoun — the current president, who was elected on Oct. 31, 2016.

Today, almost a month before the end of Aoun’s term in office, while the opposing camp calls for a “confrontational” presidential candidate and threatens to block the process, Hezbollah seems to be opting for moderation.

These calculations are to be interpreted in the context of the Parliamentary political balance that resulted from the May 15 legislative elections, in which no party can claim majority. This makes it difficult for one bloc to impose its own candidate for the presidency.

To hold a session to elect a president, Parliament requires a quorum of two-thirds of MPs (86 out of 128). The same goes for the first round of the actual presidential election.

“Hezbollah is taking a pragmatic approach,” said Faisal Abdel Sater, an analyst close to Hezbollah, to L’Orient-Le Jour. “It is aware that, even with its allies, it does not have a parliamentary majority and that the circumstances that led to the election of Michel Aoun in 2016 are no longer the same.”

Between Frangieh and Bassil

Two of Hezbollah’s traditional allies, Marada Movement leader Sleiman Frangieh and head of the Free Patriotic Movement, Gebran Bassil, are seen as serious presidential candidates, or at least as key players, in this election.

However, Nasrallah appears to be carefully avoiding endorsement of either of them — a position that Kassem Kassir, an analyst close to Hezbollah, said could be explained by the disagreements between Frangieh and Bassil.

“In view of these differences, the party prefers to adopt a median position and avoid pronouncing itself in favor of a specific candidate,” Kassir told L’Orient-Le Jour.

“Hezbollah is now calling for consensus because, like everyone else, it is aware of the fact that agreement is the first step for holding the election,” he added.

According to Kassir, Parliament Speaker Nabih Berri — a traditional ally of Hezbollah — has yet to call an election session for the same reasons, even though he has been empowered to do so since the timeline to elect a president began Sept. 1.

Like Nasrallah, Berri prefers to wait for a broader Lebanese-style agreement to be reached.

This position was clearly expressed during the parliamentary session held Friday at Nejmeh Square, when Berri responded to a question from Paula Yacoubian, MP with the Forces of Change.

“Entering Parliament without an agreement would be an adventure. We want a minimum of agreement. When this happens, you will see me immediately call a session [to elect a president],” Berri replied.

It is in this same logic, and in a bid to advocate the election of a “consensual president, capable of dialogue with everyone,” that Progressive Social Party leader Walid Joumblatt made a rapprochement with Hezbollah.

Does Nasrallah’s most recent statement mean blocking the path to the Baabda Palace for his two allies? Both Sleiman Frangieh and Gebran Bassil are far from being unanimous candidates.

Frangieh is seen to be affiliated with the March 8 camp because of his alliance with the pro-Syrian axis, despite his efforts to make overtures to other camps.

Gebran Bassil, meanwhile, is not only sanctioned by the US for corruption, but also the most despised political figure among the Lebanese since the Oct. 17, 2019, popular uprising. His election would be interpreted as “a challenge to the will of the Lebanese,” as Berri, a fierce opponent of the Aounist camp, said on one occasion.

“We do not think that Hassan Nasrallah wanted to block the candidacy of anyone,” an FPM official told L’Orient-Le Jour on the condition of anonymity.

“The natural and logical [presidential] candidate of the Aounist camp has not yet made a final decision to present himself,” the source added, in reference to Bassil.

As for Frangieh, “it is still early to say if he is excluded, because his name is still on the table. But his election requires local and regional conditions that are not yet met,” Kassir explained.

He added that the presidential election is in no way linked to the Iranian nuclear issue, while the agreement between Tehran and the West is still pending.

Nasrallah’s biggest local opponent, Lebanese Forces leader Samir Geagea — who, with 19 MPs, is the heavyweight in the opposition camp — is advocating for a “rescue” president that would “confront” Hezbollah.

“We are against any agreement with Hezbollah on the presidential election, because any president approved by Hezbollah will not get the country out of the current crisis,” LF spokesman Charles Jabbour told L’Orient-Le Jour, while calling on the opposition MPs to continue their efforts to close ranks.

For their part, the 13 Forces of Change MPs began meetings yesterday to assess the outcome of their talks with different political stakeholders before moving to put forth the names of candidates. Those names will be announced after the second round of talks with the political parties, according to information obtained by L’Orient-Le Jour.

“There are calls for unity around a president, and we call for a consensus on a name, away from vetoes,” Hezbollah leader Hassan Nasrallah said during a speech Saturday in Baalbek.Not only did he extend the offer to political stakeholders to reach common ground around the future Lebanese head of state, he also called for elections to be held “on time.”This appears to contrast...